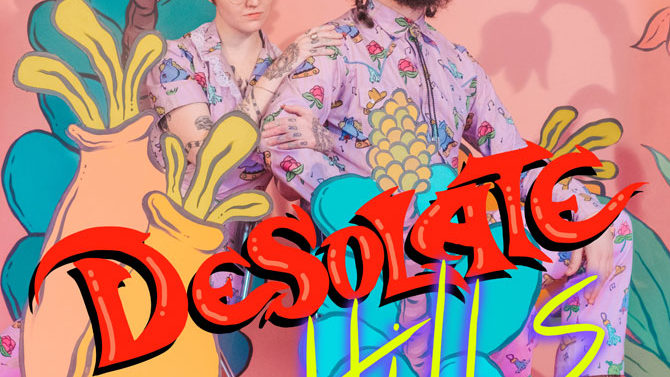 DANCING WITH MYSELF:  The brains behind HHBTM Records compiled a ‘“plague list” album, went ahead and named it Plague-list, and it’s available now. It’s priced as pay-what-you-want so you can either 1) grab it free or 2) throw at least a modest amount toward it before you download. It features 15 tracks from previous HHBTM releases, and each song is at least tangentially related to our current times. Featuring, of course, perhaps the most prescient single of all of last year—WesdaRuler’s “Stay At Home”—the record also features top tracks from Eureka California, Magnapop, Marshmallow Coast, Tunabunny, The Wedding Present, Witching Waves and others from the label’s roster. Find it over at hhbtm.bandcamp.com.

HERE COMES TREBLE: There’s a new single and video out this week from Baby Tony and The Teenies named “Desolate Hills,” and it’s technically the first single from the band’s new album, Baby’s Got It, but for right now there’s no telling when the whole record will come out. I was told that the single is about moving from Denver to Athens and the emotional ball of twine that gets kicked around and played with as the result of such a huge shift in landscape and, perhaps, culture. The tune itself is a sweet, slow tune in the band’s signature indie-doo-wop style that carries the vocals along on a lithe wave of reverb. This thing hits land Apr. 24, and will most likely be available at babytonyandtheteenies.bandcamp.com and/or soundcloud.com/user-917249291, and yeah, they should use some of this downtime to clean up that second URL for sure. If you can’t find it at either place, head to facebook.com/babytonyandtheteenies and, I dunno, challenge ‘em to a rumble or something.

ASSORTED FRUIT: Athens singer-songwriter Jeremy Crowe dropped a new EP titled Colors a few weeks ago. Taking the ethic of a true workhorse, he challenged himself to write, record, mix and master as many tracks as possible in a single week and then release the batch. To this end, and matching appropriately with its title, Colors taps into the breadth of Crowe’s taste. So, there’s the Scorpions/Bryan Adams-ish “We’re Getting Older”and the Imagine Dragons-inspired “Burn It Down.” But there’s also the well-stated and forthright “Until You Lose Something,” which has solid pop-guitar arrangement well matched with its mid-tempo rhythm. The two straight-up singer-songwriter type songs here are “Runner” and “Temporary,” and each does a fine job of straddling that line between Nashville and No Depression. There’s no questioning Crowe’s ambition or talent, but the fact is there’s just too much going on at once here, and from song to song it’s as if the artist keeps switching. That’s not necessarily a bad calling card for a producer seeking clients, but for an artist looking to establish a name, it’s less than desirable. This is available on all the big and small streaming services, and you can be a fan in real life over at facebook.com/Jwjcrowe.

LEMME HOLD A DOLLAR: Looking for a way to spend a dollar this week? Well, the Athens Tango Project has a way for you. Head over to athenstangoproject.bandcamp.com and grab the group’s newly released cover of Astor Piazzolla’s “Oblivion.” The group was slated to record a long session this past month, but those plans were scrapped. Now this piece, which was planned to be a part of that forthcoming album, is a stand-alone thing. At any rate, this is a very nice and faithful rendition of the heavy-hearted original, and totally worth your money. It comes out on Apr. 24 but you can pre-order it at the link above. For all other news please see facebook.com/athenstangoproject.

ANOTHER BROTHER FURTHER: Although his releases don’t come out as rapidly as they used to, Space Brother (Future Ape Tapes, et al) always puts his whole into whatever he’s doing. He’s got a new record out this week named Question Eternal? and it’s another solid entry into his deep catalog. For the uninitiated, he specializes in introspective indie-rap, experimental loop-based tracks, heightened melody and more along these same lines. Particular highlights on this include the hybrid “Passages,” the overtly pretty “Silhouettes,” and the Electric Body signposts of “Percentages.” This is released courtesy of Bear Tooth Tapes, and can be found over at beartoothtapes.bandcamp.com.