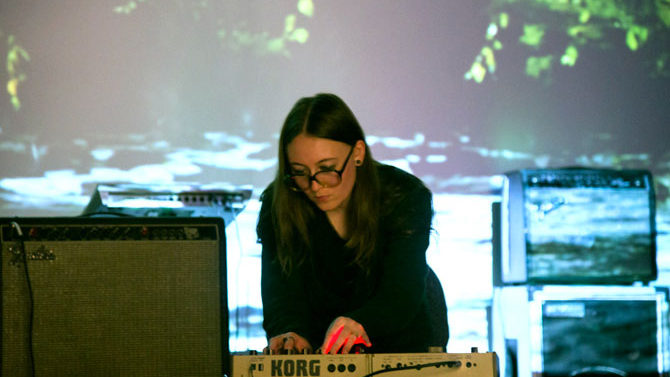 WICCA, WICCA, WHAT?: A performance this week that might have flown under your radar if not for this column is the upcoming show by Motion Sickness of Time Travel (MSOTT) at the Athens Pagan Pride Day event. The whole shebang takes place downtown on College Square Saturday, Oct. 5 from 5–10 p.m. This particular performance, though billed as MSOTT, which is the sole concern of Rachel Evans, will feature Evans and longtime Athens experimental performer Leslie Grove. The two have worked together multiple times previously under the name Lock, and you can explore some of those recordings at vaald.bandcamp.com. They will play in the Workshop Tent from 5:30–6 p.m., immediately following the Opening Ritual. The Athens Pagan Pride Day website is kind of messy to navigate, but the page you want to see is nested under the “Schedule of Events” link. To dive very deeply into the Motion Sickness of Time Travel catalog, listen in at motionsicknessoftimetravel.bandcamp.com, and to learn more about Athens Pagan Pride Day as a whole, point your third eye toward sites.google.com/site/athenspaganprideday.

COME TOGETHER: Athens premier—and only—Beatles tribute band, Abbey Road Live, is going whole hog into its celebration of the 50th anniversary of the album from which it took its name. This show will happen at the Georgia Theatre on Saturday, Oct. 5. Doors open at 8 p.m., the show starts at 9 p.m., and tickets are $12 in advance and $15 at the door. This night’s show will feature the band playing the Abbey Road album in its entirety from start to finish. Then they’ll play a second set of Beatles material and host an all-star cavalcade of special guests, including the incomparable Michael Guthrie, as well as David Barbe, Clarence Cameron, Mike Mantione, Caroline Aiken, John Keane and more. For tickets, see georgiatheatre.com.

OH, HERE’S WHERE THEY ARE: Orange Twin Records added a bunch of releases to its Bandcamp page a couple of weeks ago, including titles from Elf Power, Madeline and others. I surfed over there to check it all out again and wound up re-listening to a bunch of things I hadn’t heard in years. And it was all very nice to hear. So, consider doing yourself a solid and heading to orangetwinrecords.bandcamp.com to see what you’ve missed and remember what you’ve been missing. For more information on Orange Twin, see orangetwin.com.

THIS IS WHAT YOUR MIND IMAGINES: I swear to God, the sun never sets on the Echobass Records empire. To wit, just last week, another new album dropped by Killa Cabbi. This wildly diverse record, named The Moon, has so many different elements that somehow remain cohesive and not distracting or irritating. Super standout tracks include the freak jazz of “The Evening Fiesta,” the ambient trip-hop of “La Luna del Cacciatore” and the 2000-and-later witch house styling of “Endless Searching.” Guest players for selected tracks include Brent Davenport, Chase Merritt and Jackson Dodd (Pine Til Palms). Slip away over at echobassrecords.bandcamp.com.

NEW CREW REVIEW: There’s a new music collective in town you may not have heard of—hell, I hadn’t—named Soul Perch, and they’ve just released a new EP by flagship act Grunfelder. It’s named Baby Sturgeons and runs four tracks long. The group takes its name from guitarist Jimmy Grunfelder, and, indeed, this was originally his solo project. Overall, the group perpetrates a jittery mood and, at times, threatens to be too clever by half. However, there’s a noted appreciation for the Tin Pan Alley tradition, as well as well as a tendency to slip into mid-1990s, Athens-style psych-pop. The latter is very slight, though, and basically unnoticeable unless you’re paying very close attention. So far, Soul Perch as a whole—and Grunfelder by extension—seems to really have its eye on the ball, and I’m hoping for great things for all concerned. You can find this on Spotify and all other major streaming services and find out more about Soul Perch at soulperch.art.