Farmer Jason Plays Back to School Bash, and More Music News and Gossip 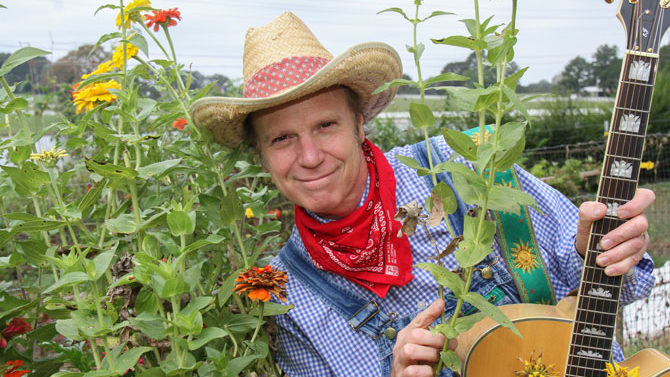 Y’ALL SETTLE DOWN: Winterville’s Marigold Festival has joined with the township of Winterville itself to present a Back to School Bash for kids heading into the new academic year. It’ll happen Saturday, Aug. 10 from 10 a.m.–2 p.m. at the Winterville Auditorium (373 N. Church St.). The featured performer is Farmer Jason, who is none other than Jason Ringenberg of influential cowpunk band Jason and the Scorchers. Ringenberg created this character in 2002 as a way to educate children about nature and farm life. Kona Ice will be on site, and the first 50 kids will get a free shaved ice. A light lunch will be served after the concert. Just when you thought it couldn’t possibly get more outta hand than all this, be advised that there’s word of inflatables and other fun activities happening on the auditorium grounds, too. For more information, see facebook.com/MarigoldFestival, and for specific questions, email kids@marigoldfestival.com.

ALL GAVE SOME: A benefit supporting suicide prevention among veterans will happen Friday, Aug. 9 at The Foundry. Presented by Artist2Artist, a broad-based local charity supporting the arts and a variety of humanitarian causes, this show’s individual purpose is aligned with its 2019 mission of assisting veterans suffering from post-traumatic stress disorder. Billed as “Let the Moon Shine on a Hot Night in Georgia,” featured performers are Hunter Grayson, the aforementioned Ringenberg, The Simple Life Band, Heart of Pine and Boone Hood. Doors open at 6 p.m. with a doggy kissing booth provided by Athens Area Humane Society, and music begins at 8 p.m. Tickets are $15 (or two for $15 for veterans), and VIP tickets are $25. For tickets please see thefoundryathens.com, and for more information head to artist2artist.net.

SEASONAL PERSPECTIVE DISORDER: Adversary Electronics, home of both Quiet Evenings and Motion Sickness of Time Travel, has two new releases out this month. First is the new one from Quiet Evenings, Environs. This two-track record begins with the oddly soothing “Hesitant.” Even with summer sunshine flooding the room where I first listened to this, the ease of the hypnotic, multi-instrumental drone, with occasional seconds of what could be either cymbal wash or wind samples, kept things very cool and comfortable. The second track, “Emblem,” follows much the same path, albeit with a heavier sense of being in a minor key. The last minute, though, takes a dark turn and introduces uneasiness right as the track ends. The label’s second release this month is the compilation Rural Electronics. It features tracks from Quiet Evenings (the blissfully sleepy “Gloved Devotion”), Motion Sickness of Time Travel (the heavily electronic and multi-sectional “Ganymede”), Ornamental Hairpin (“Cherry Blossom Society,” which begins life as plucky and driven but becomes self-destructive and obscured by noise) and a solo piece by Grant Evans (the bass-oriented sandbox of semi-acoustic glitch “Satan Strung Pearls”). Each is available via limited-edition cassette tape and digitally. Listen and purchase digitally at adversaryelectronics.bandcamp.com, or buy tapes at adversaryelectronics.bigcartel.com.

SECTIONAL FURNITURE: We’ve not heard from Subdivision in a while, but the electronic duo just released a swell four-song EP named Aquamarine. Cool and understated opener “Sea Floor,” notable for its Moroder-on-syrup drums, functions largely as a diving board into the dreamscape-y wonder world of “Pod Chaser.” That track, with its turn toward heaviness in its final two minutes, sets up the entry for “Marianas.” This third track begins as markedly claustrophobic and daunting, and its rhythm threatens to speed up throughout, but never does. It’s what I imagine sitting in a spaceship simulator is like before, I suppose, take-off simulation begins. The fourth and final track, “Eels,” is a 20-minute musical gauntlet that few, if any, will actually run. I did, though. It’s composed of very specific sections, and you’ve got to get about three-fourths of the way through before there’s any standard-language electro stuff happening. But the couple of minutes it’s there are pretty sweet. In other news, Subdivision released another title, Side App, back in March, but since I missed out on that one, y’all can wait another couple of weeks for me to remark upon it. Head over to moonrobbers.bandcamp.com.