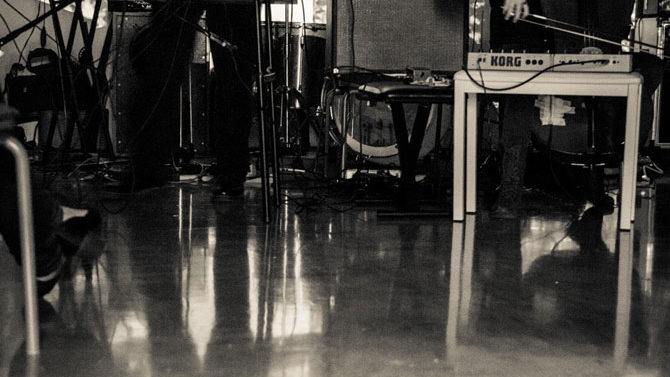 HEY, STRANGER: Experimental composers Grant Evans and Rachel Evans, both of Quiet Evenings, released a new collaborative album under the moniker Ornamental Hairpin titled Camus in Japan. It comes courtesy of their Adversary label, and its physical release is limited to 60 cassette copies. (Digital copies are presumably unlimited.) Opening track “Boulder of Glass” is an occasionally unnerving piece that, counterintuitively, is so calm it starts its business of being unsettling the longer it plays. The steady-string heartbeat that keeps pace in the track’s early moments contributes to this, though, and the end is a tooth-grinding shrill tone. “The Hill (Camus in Japan)” is much more orchestral and celestial. Over the years, I’ve become quite partial to and comforted by electronic static and flutter, so the presence of this across most of the track pleases me very much. “Tomb of Sisyphus” is aurally a continuation of “The Hill,” but is presented as the first track on side B. When listening digitally, that signifier is more artistic intentionality than experienced phenomenon, but I get it. There’s a lot more to be said about this whole thing, but honestly, there’s not enough space here, and I’m not entirely certain I have any of the right words. As I expected, though, it was a treat to hear. Explore on your own via adversaryelectronics.bandcamp.com.

TURN THE BEAT AROUND: Longtime Athens rapper Donny Knottsville strikes again with his newest album, Midnight Urban Drugstore Cowboy. It’s got a bunch of new stuff, plus a few older tracks that aren’t available on other releases anymore. Guest appearances happen courtesy of Sienna Chandler (Monsoon), SOHI, Tom Visions, Ddot Cdot and Wupmode. As expected, Knottsville’s flow is still as rapid-fire yet completely intelligible as ever, and his sense of humor continues to surf the radio wave between the vulgar and absurd. Close and repeated listens, though, reveal occasional bursts of honest critique, concern and seriousness, such as those explored on “Don’t Think So.” In other news, he is ostensibly officially retired from rap, but as he puts it, his retirement is on hiatus. Man, just go dig this at donnyknottsville.bandcamp.com, and get ready to drop that top down on grandma’s Sebring.

THE GANG’S ALL HERE: Ian Hemerlein (Kwazymoto) has steadily worked on his other project, Saint Syzygy, for a while now, and I’m pretty sure I’ve covered everything he’s done, so there’s no reason to stop now. His new EP is the first Saint Syzygy release with a full band, but there are no new songs on it. When We Die features two songs from his 2018 album Party at My Place (“Dead Cowboys” and “Monophobia”) and two from his 2017 release Entertainers (“Dying Man” and “Untamed Ego”). While the overall structure of everything remains the same, the arrangements are necessarily punchier, and I’m partial to Hemerlein’s expressiveness on both “Dying Man” and “Untamed Ego.” I’m not completely sold on the full-band arrangements of these, but I got used to them after a few spins. Hear for yourself at saintsyzygy.bandcamp.com.

DOUBLE SHOT: In yet another two-song dose of deeply emotive tunesmithing, Love My Truck let slip Content Is King. There’s a marked 1970s shroud covering “Misspelled Lust.” So much so that, if you stood a couple of rooms away, it could easily be mistaken for your housemate’s favorite Harry Nilsson record. The much noisier and clustered “Corner Bar” is a subterranean rager of a track where it’s so closed in, the guitars can barely escape. It’s a departure from what we’ve heard thus far from Love My Truck, but it fits seamlessly with all the group’s other songs. The tremolo-theremin effect the song takes towards its middle and end doesn’t make it feel spacey or free, either. It does, however, reveal more clearly a looming sense of being untethered. Catch both of these at lovemytruck.bandcamp.com.