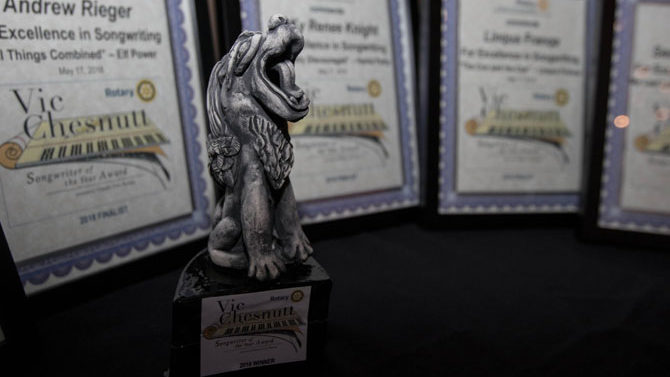 STRUM ’N’ HUM: The nomination season is now open for the 2019 Vic Chesnutt Songwriter of the Year Award. This honor, bestowed annually by Classic City Rotary, confers both bragging rights and a cash prize. Additionally, funds raised during the event are used to support Nuçi’s Space and Rotary’s own mission of service to the arts and the community. Previous winners are Linqua Franqa (Athens-Clarke County Commissioner Mariah Parker) and Andrew Huang. Nominations are open to the public until Mar. 15. A kickoff party for this year’s award season happens Friday, Feb. 8 at Hendershot’s Coffee Bar. Featured acts are Bain Mattox, Adam Payne, Cortez Garza and Scott Low. It’s all-ages, free and doors are at 7 p.m., with music starting at 8. For more information, see classiccityrotary.org and facebook.com/VicChesnuttAward.

SHOOT OUT THE LIGHTS: Sound and visual artist J Anderssen, operating under the name Ihlyatt, released a new full-length last month named Fetch. The album notes explain the title as “an apparition that appears to observers at the instant of an individual’s passing.” Significantly—to me, at least—“passing” is left open to interpretation. True to its theme, Fetch—which is quite deliberately composed but heavily populated by sheets of noise, static, storm sounds and other aural textures—delivers a steady current of emotional devastation. By the time it’s gotten to its centerpiece, “Brocken Bow,” it’s fully in the storm, although this particular track functions something like an eye and is slightly clearer in delivery. The record is completely instrumental, but not in any way an easy or simple listen. Discernible instruments include guitar and bass, but honestly, trying to pick this thing’s bones is less than satisfying. At only five tracks, you’d think this would be easier to handle, but once you’re in, there’s no way out but through. All of which is to say, this is gorgeous and sad and more than a little uncomfortable at times, so go give into it at ihlyatt.bandcamp.com.

GUITAR MAN: Athens guitarist Grayson Hauser released a five-song record last September named Portraits, but it only recently crossed my desk. It opens with the gentle ’n’ jazzy “Lakeside Sketches,” leans in heavily on the Pink Floyd-ish “City Nights”—which is full of that kind of ’70s-ish guitar wail you’ll remember well—then relaxes into the subdued porch rockin’ of “Sunrise.” It closes out with slow-jam R&B number “Peralta Winds” and a reprise of “City Nights” appropriately titled “City Nights Pt. 2 (Keep Dreaming)” that features a pretty surprising and rhythmic outro. While nothing here is a total mind-blower and it feels more like a demo than a proper release, there are a few shining moments. Honestly, most of what I like is its honesty in presentation. There are some obvious overdubs, but they’re all in service of getting the tracks down, not for covering anything up. Indeed, there are some clearly audible stray notes, accidental mutings, etc. peppered throughout. In 2019, when even the tiniest indie band feels compelled to polish over its humanity, leaving the flaws in can have the counterintuitive effect of making a recording better than envisioned. Check this out at graysonhauser.bandcamp.com, and keep up at facebook.com/graysonhauserguitar.

RISE UP, GATHER ’ROUND: The Athens Free Skool is hosting a songwriting workshop titled Songs of the Oppressed Wednesday, Feb. 6 from 6–8:30 p.m. There’s no special skill needed, nor instrument-playing ability required. This workshop is specifically billed as “songwriting for non-musicians,” so anyone is welcome to attend and participate. The Athens Free Skool operates as a collective learning syndicate, whereby classes are proposed and held at various locations around town. The only hardcore requirement is that the classes be free. Other upcoming classes include one on beekeeping and another on guitar setup and maintenance. This particular class happens at the regular hosting space at 317 N. Chase St., more information can be found at facebook.com/AthensFreeSkool, or drop a line to athensfreeskool@riseup.net.

METAL HEALTH: Normally, I don’t put anything in here about big, national-type shows, but come on, I’ve gotta shout these local dudes out. Anyone ready to dive headfirst into the weekend owes it to their self and metal family to hit the 40 Watt Club Friday, Feb. 8, when one of the hardest touring Athens bands ever, Lazer/Wulf, along with another favorite set of road hogs, Double Ferrari, join Raleigh, NC’s Between the Buried and Me. Now, tickets aren’t cheap, at $21–$24, but if you’ve got it to cough up, get to coughin’. Also, this show is all ages, but those under 18 need to bring a parent or guardian. For more information and tickets, slam your face into 40watt.com.