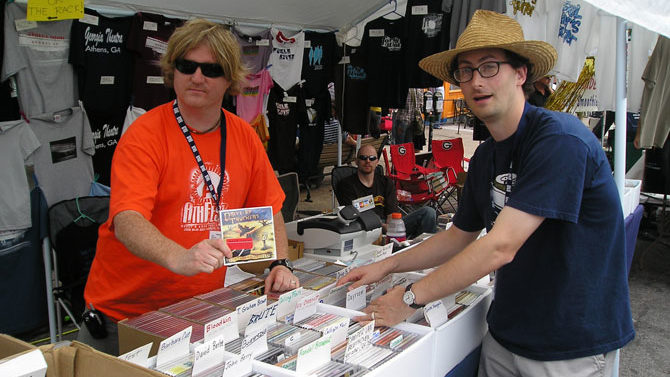 WHISTLE AS THE WIND BLOWS: After almost 19 years serving Athens musicians and music fans, athensmusic.net is shutting down. Right now, the site is busy getting product back to bands—so, if you’ve got stuff listed with them, go ahead and get in touch—and is hosting a big sale of all the items they purchased outright. It’s hard to remember sometimes, but back in 2000, when the site launched, it was difficult for bands to accept credit cards and reach fans all over the world from one digital location. Athensmusic.net was dedicated to more than sales, though, as its owners—Jeff Montgomery and Troy Aubrey—each maintained a personal commitment to being a beacon shining out the gospel of Athens to the world. And each, in his own way, still does. Montgomery told me via email, “We were a great central hub for Athens music for quite a while, but it is just too challenging to try to keep up and try to sell all the digital, physical and streaming music options from so many Athens bands. So, now we can just enjoy and support the scene in other ways. [This support and enjoyment] is why we started athensmusic.net in the first place and why we both moved here originally.” Thanks for all y’all did for so long, guys. For more information, see athensmusic.net or drop a line to jeff@athensmusic.net.

HARD RAIN: Gypsy Farm Records and studio founder Zeke Sayer (The Humms, The Ice Creams) has a brand-new massive solo LP named CP 2106 LP. It runs a full 17 tracks that feel like lost artwork. That is to say, they have a fairly clear provenance, but no real home. They ramble and move around and can seem like they were born in the 1930s, but spoke their first words while waiting for a bus in the mid-’60s. In the simplest terms, it’s a huge collection of beautiful, sometimes funny, sweet folk songs. Significantly, though it’s supremely humanistic and often quite tender, there’s also a muscularity to these tracks and the project that keeps it all between the ditches. Although I’ve no real clue how he went about recording these songs, most of it sounds like a one-microphone deal and a directly lined guitar. And that’s really a perfectly tight way to handle material that is both so universal yet so personal, too. Check it out at gypsyfarmrecords.bandcamp.com.

BARS, GUITARS, ETC.: For as much as we all love our friends’ bands, we’re also quite often terrible at predicting who will “make it big,” so to speak, outside of Athens. There’s always been a certain myopic quality to the downtown music scene, so chances are very good most of y’all aren’t terribly familiar with country artist Hunter Grayson. He’s from Watkinsville, plays live all the time and won the titles of Country Male Artist of the Year and Country Artist Overall, too, by claiming the majority of votes from fans and a judging panel during the 10th annual Georgia Country Awards held in Macon back in November. It’s all pretty stunning for a guy who only bought his first guitar in 2015. While Grayson isn’t completely up my alley, there’s a certain traditional quality to him that I enjoy. His single “Tipsy,” for example, is reminiscent of a certain type of 1970s pop-country I used to hear in the car driving around with my aunts and uncles. Anyway, I liked it. He’s done playing shows in Athens for the rest of the year, but there’s hardly any doubt he’ll be back to his full schedule soon. If you’ve gotta see him, though, he’s playing the American Legion in Lexington on New Year’s Eve. For more information, see facebook.com/HunterGraysonMusic and huntergraysonmusic.com.

EVERYBODY GET TOGETHER: The New Horizons Band is hosting its holiday concert at Georgia Square Mall Wednesday, Dec. 12 from 1–2 p.m. Attendees will be treated to holiday favorites ranging from classics to the more contemporary. For the uninitiated, The New Horizons Band is composed of members over the age of 50 who either recently learned a musical instrument or returned to playing after several years. The group meets up weekly to play and performs throughout the year.

RIP: Flagpole was saddened to learn about the recent death of Tony Young, an Athens drummer known for his work with the bands Waylaid and Magneto. Young, who also once owned Five Points burrito joint Mean Bean, died Dec. 3 after a battle with cancer. His family requests that donations be made in his honor to the Jack & Jill Late Stage Cancer Foundation. [Gabe Vodicka]