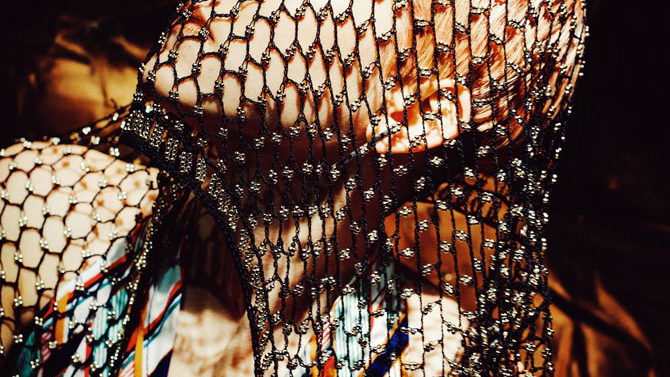 CONSTRUCTION TIME AGAIN: The new album from Lambda Celsius (often stylized as Λ°C ) came out last week, and it’s named Ana Echo and the Beauty of Indifference. The persona in the title is explained as a “LiveJournal-esque avatar” of project creator AC Carter. The album arrives courtesy of Banana Tapes and Carter’s own label, Scorpion Beach. The creative trajectory of Lambda Celsius over the past 10 months or so has been positively meteoric, as some of the songs on this new collection came out in bibs and bobs. Where earlier tracks were nearly uniformly dark and minimal—a style I fully embrace—this new collection spreads its arms a little while remaining loosely within that same structure. Significantly, the vocals and lyrics are well placed up front, and several songs burst with pop sensibility. Specifically, “Beauty of Indifference” and “Simulacra” are the type of catchy tracks that’ll catch the ear of casual listeners before drawing them into Carter’s world of deeply rhythmic, heavily heady music. Standout tracks from the dark side include the superb “Fashionable Linguistics” (co-written with murk daddy flex) and “PMMDMD.” For my money, at least on the night I’m writing these words, I could loop the EBM groove of “Time to Change History,” with its cinematic storm sounds and disintegration sound effects, for an hour and not get bored. So, yeah, it’s that good, y’all. Check it at lambdacelsius.bandcamp.com, and be a fan at facebook.com/lambdacelsius.

DO YOU WANT NEW WAVE OR DO YOU WANT SOME CHILI?: Actually, punters, you can have some of both. Pylon Reenactment Society is playing a make-up date at Southern Brewing Co. Friday, Oct. 5 at 6:30 p.m. This show is happening because the group’s third-anniversary show back in August got rained out. Also on the bill is the Athens Area Humane Society’s chili cook-off, which runs from 5–8 p.m. at the same spot. Now, see, the band is free, but the chili will cost ya 10 bucks. Honestly, I can’t tell if this is all very intentional or accidentally double-booked, but dammit if there’s not a great Spinal Tap/puppet show joke here somewhere. In all seriousness, though, go support the good work of AAHS and dig on the band. For more information, see facebook.com/pylonreenactmentsociety.

THANK YOU FOR BEING A FRIEND: I know there’s a bunch of you out there who, deep in your middle-aged indie-rock hearts, got really excited when you found out that Archers of Loaf and Crooked Fingers frontman Eric Bachmann moved to town several years back. You probably got all aflutter thinking of seeing him play live around town and this ’n’ that. Well, that didn’t exactly work out, and it’s not working out on his current tour, either, which began in Decatur and ends in Chicago. He’s out on the road supporting his newest release for Merge Records, No Recover. Thing is, though, if he was ever trolling Athens for musicians to play with, he could have done a lot worse than his choices of Jeremy Wheatley on drums and McKendrick Bearden on guitar. Seriously, they’re two of the finest players from ol’ Athenstown. Good on ya, Mr. Bachmann.

LEAVE A LIGHT ON: I suppose, since Halloween is on its way, there’s no real problem with the Athens debut of Atlanta band Cloak being billed as a “Night of Terror.” The show happens Friday, Oct. 5 at the Caledonia Lounge with local metal fanatics Beast Mode and Guillotine. Generally speaking, I’m not going out of my way to promote an Atlanta band in my local music column, but Cloak’s record To Venomous Depths hits on all cylinders. It’s hyper-tuneful stuff with a solid classic-rock base but enough black-metal flourish to keep everything interesting. Go support our troops, and maybe become a fan of these guys, too. Check it at cloakatlanta.bandcamp.com.