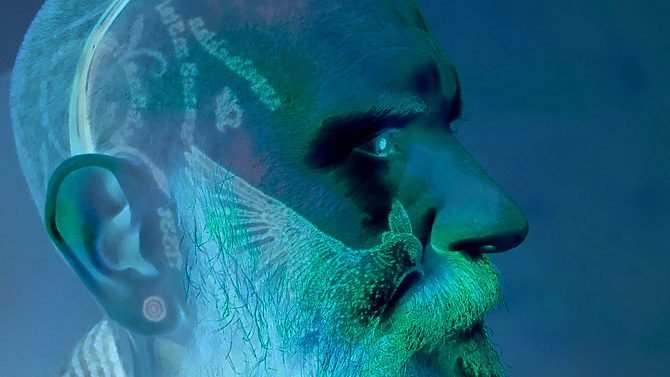 RAMBLIN’ MAN: I feel like, at one time, someone must have told Athens-based improvisational composer Killick Hinds not to release any records, so he went out and did just the opposite. Since late April, he’s released exactly 20 different collections of music—collaborations, live performances, etc.—on top of an already incredibly huge catalog that goes back a little more than two decades. At any rate, it’s a lot to hear and a lot to explore, so lemme tell y’all about one of the most challenging and rewarding recent ones. Named The Eagle’s Greatest Hiss and credited to Pitch Prefect, it’s a collaboration between Hinds, Arto Artinian and Adam Wilson. On this release, Hinds plays a keyboard controller named the Harken Continuum, while Wilson and Artinian play fretless guitars. True to its liner notes, it’s impenetrably dense, but as the notes also suggest, there’s a calm here somewhere. You’ll have a hell of a time finding it, but I assure you it’s there. At face value, it’s aggressive and cheeky and noisy, but the flow these three have together is unmistakable and, for careful listeners, unmissable. Hat tip to Hinds for reworking the cover art for Eat a Peach, too. Hot damn, son. Lend an ear over at killick.bandcamp.com.

LET SLEEPING CATS LIE: Oddly magical duo Love My Truck is back for another swing with its second EP in a month, and third for the season. These four new tracks arrive under the title Songs From the Litter Box. Opening track “Fraud” pairs the tongue-lashing brutality of vengeful heartache with a tune that could have easily been written by the late, desert-disappeared Jim Sullivan. The main thread running through these songs is the concept of home and everything that can imply: safety, emptiness, preparation, loneliness, whimsy, etc. It’s very easy to listen to Love My Truck and mindlessly bliss out. The pedal steel carries the listener over a psychic railway pass with no problems at all, and the guitar hitches along as would a fine companion. But this EP bares its teeth in a way previous releases haven’t. It’s as if the amount of strength it took to get up off the crying floor was also just enough to bite down and sneer. Listen in at lovemytruck.bandcamp.com.

PUBLIC SERVICE ANNOUNCEMENT: This is really for the new folks in town, but useful for all, so read on. As a weekly paper, nearly everything printed in Flagpole—including this column—is wrapped up a week or more before publication. Quite often, there’s a ton of stuff I would love to have featured, but it crossed my desk too late. Material for this column is gathered from my own research, tips, conversations and things folks send in. I’m still a staunch believer that just because something’s happening doesn’t mean it’s necessarily news. That said, if there’s something you’re doing, releasing, hosting—or whatever—that you’d like covered, getting it to me on time is still your best fighting chance. In this case, “on time” means at least 10 days in advance of publication. I can’t mention everything, some things aren’t worth mentioning, and even if something does get covered, there’s always a chance I’ll have a sour opinion on it. Those are the breaks, folks. But the breadth of this column is very wide, as is what I consider to be the Athens music scene. To this end, I’m generally game to cover most charity events, campus concerts, church choirs performing special works, etc. Most political events aren’t considered, unless they feature particularly good lineups. The email address to get in touch is always published right here at the top of the page, so, I dunno, cut it out and put it in your wallet or something.