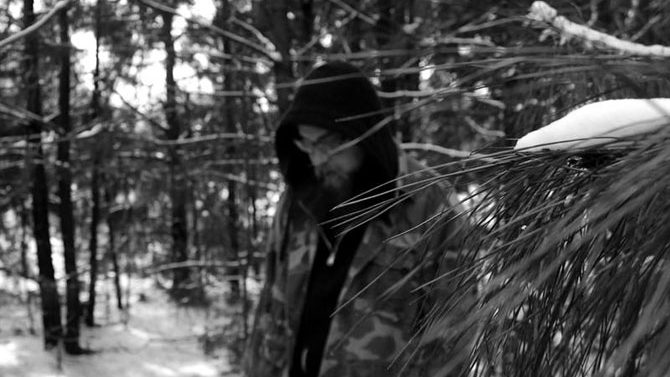 SHIPPING AND RECEIVING: Longtime experimental musician Grant Evans—of the labels Hooker Vision and VAALD and known for his recordings with Quiet Evenings—has a new tape out on Athens’ Null Zone label. It’s titled Vessel, and the title’s significance—i.e., a sense of being carried and possessed and/or carrying and possessing—is revealed by listening closely through the whole thing. It opens with the agitated, back-and-forth layered noise of “L’enfant Terrible” and adjusts abruptly into the heavy-lidded “Vermillion Counterpoint.” The mid-section pieces, “Vessel (Arc)” and “Vessel (Pomegranate),” feature the former sending its static-y waves in stereo, which has the perhaps intended effect of making the latter’s binaural quality more jarring than soothing. In particular, the feedback just past the five-minute mark comes out more like a scream than anything mechanical. There’s a certain sophistication to Evans’ work that commands respect and attention, but none of that is to say this is easygoing. Not by a long shot, really. Check it out at nullzone.bandcamp.com.

SING OUT LOUD, SING OUT STRONG: The Foundry will host the Best of Unknown Athens songwriter showcase Wednesday, May 30. The idea is to present six or seven new artists making their way in the scene, and the venue does this about once a month. The artists play and discuss their songs with the audience, and it all seems to be a pretty chill type of thing. If you’re interested, be mindful that doors open at 6 p.m. and the show begins at 7. Everything should wrap up by 10. This event is hosted by Liam Parke of Irish pub band Repent at Leisure.

NO. 1 GOOD LUCK CHARM: Daniel Hutchens (Bloodkin) is having a residency at the Georgia Theatre Rooftop this summer. Billed as Daniel Hutchens & Friends, these shows are early (running from 6–8 p.m.), so fans will want to arrive on time. Hutchens is easily one of Athens’ best songwriters of the past 25 years, and has enjoyed critical acclaim from Pitchfork, Rolling Stone, Aquarium Drunkard and more. More importantly, his work with his peers (Widespread Panic, Jerry Joseph, David Barbe and John Keane, plus jaw-droppers like Johnny Sandlin, David Hood and Roger Hawkins) makes for a resume worthy of immediate attention. His rooftop dates are Monday, June 4; Friday, July 6; and Thursday, Aug. 2. For the uninitiated, dig through bloodkin.bandcamp.com.

BRAVO!: Athens indie gang Dream Culture released its newest album, Heat Rises, last week. This is a sharply focused and superbly executed deep dive into the best of what Dream Culture has to offer. Coming in at a tight 12 tracks, the record explores and nearly exhausts every recognizable style of psychedelic pop. These include the aggressively guitar-oriented (“Nosebleed,” “Drown out the Silence,” “Bite Until It Bleeds”), wisps of E6 memory (“Yes I Do,” “Thorns Have Roses”), funky R&B-flavored pills (“Likuid”) and futuristic visions (“Confusion Sets In”). None of these descriptors are meant to sound reductive. This is a fresh record, and y’all should be happy it’s out just in time for the summer. Check it out at dreamculturemusic.bandcamp.com, and follow along at facebook.com/dreamcultureofficial.

DIG IT: One of Athens’ longest-playing rockers, Carla LeFever, will play the Georgia Theatre Rooftop with her band The Rays on Thursday, May 31. Also on the bill is Atlanta’s Stoni Taylor. Taylor opens the show at 8 p.m., and LeFever takes over at 9:30. Check out Carla’s information at carlalefever.com, and bone up on Stoni via stonitaylor.com and soundcloud.com/stonitaylor.