Go Out to Sea With O Key, and More Local Music News 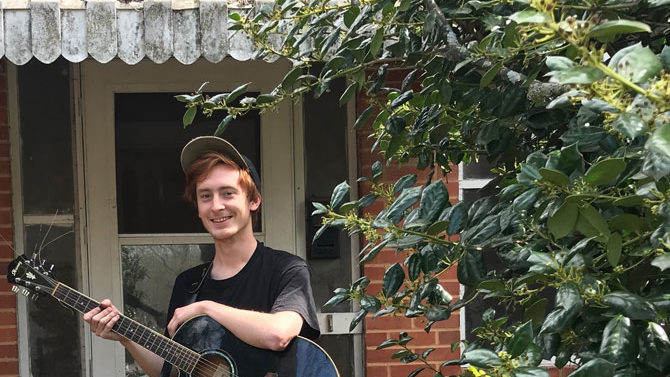 WOBBLE ON: Cole Monroe (Art Contest) has a new project named O Key, and he just released a collection of new songs named Demso. Although on its surface it seems to be pretty compositionally upfront and slightly singer-songwriter-ish, the most edifying and enjoyable aspect of this is its unabashed dub influence. This is most obviously present on opening track “Seed My Soul”—which is also in the running for best song in the whole collection—but also features heavily on “Enamel” and others. Monroe reverts back to his Art Contest styling with the jaunty “Background Music.” Honestly, the only thing I didn’t care for was the instrumental “Beulah,” which isn’t particularly distinctive. Album closer “Two Eyes,” though, is a nice way to wash out to sea after the particularly tender-souled acoustic number “Portrait of a Heart.” Check it out at okey.bandcamp.com.

WHEREVER YOU GO, THERE YOU ARE: Athens musician and author Larry Acquaviva will release the newest book in his ongoing biographical series. This third volume, Nobody Cares Who You Are: The Life and Times of Aceman, a Widespread Panic Roadie—The Panic Years, Pt. 1, covers the first two-and-a-half years of his life as a roadie for Widespread Panic, from October 1987–April 1990. Acquaviva told me via email, “With this book, I hope to shed some light on the early days of the band, to give people a perspective of just how difficult it is to keep a working, traveling band together, and what it takes to survive life on the road when you barely have two pennies to rub together.” Acquaviva is a great storyteller with a sharp memory and eye for detail. Significantly, he’s not removed emotionally from this work. It is, after all, the story of his life. This newest volume is out this week and available through Deeds Publishing, both Avid Bookshops, Barnes & Noble and Amazon. The release party happens Saturday, Apr. 21 at Flicker Theatre & Bar, where you can get a signed, personalized copy of the new book or previous volumes. Live music is provided by Scott Laniak, The Plague and Acquaviva’s own The Honey Sliders. The book signing starts at 8 p.m., and the show begins at 10. This event is free.

BEEP BEEP!: Indie-rock powerhouse Eureka California will hit the road for the rest of the month leading up to the release of its newest LP, appropriately titled Roadrunners. From Apr. 18–30, the duo will plow through Chattanooga and Nashville, TN; Columbus and Cleveland, OH; Boston; Brooklyn, NY; Allentown, PA; D.C.; Roanoke, VA; and Greenville, SC. Then they’ll breathe for a few days before celebrating the album’s release at Little Kings Shuffle Club Friday, May 4. The bill this night is pretty stacked, too, with Harlot Party, Lydia Brambila and Linqua Franqa. Stream “Over It,” the album’s latest single, on Homedrone. Preorder the record via hhbtm.com, become a fan at facebook.com/eurekacalifornia and catch up on any tunes you may have missed over at eurekacalifornia.bandcamp.com.

GET THE WORM: Early-bird tickets are now available for the Athens Popfest. The fest, which runs Aug. 8–11, is notable for its solid lineups of legends and up-and-comers, as well as being an annual meeting place for like-minded fans from all over the world. In the spirit of full disclosure, I perform stage-managing duties for this event, but am not in any way connected with its booking, finances, etc. These early tickets are full-festival passes that will increase in price as soon as the lineup is announced, so time is limited. Also, no tickets will be shipped. All purchasers will pick them up at the festival. As of now, they’re only $52, which breaks down to less than 15 bucks a day and includes every performance. To purchase, head to athenspopfest.com.

YOUR MILEAGE MAY VARY: Athens songwriter Dan Clifford has a new three-song EP out named Future, which he says is titled in tribute to both the rapper (?) and the concept, which makes sense in the context of being the wrapper that surrounds these songs. Each is a guitar-based exploration of self-reflection and, I suppose, healing. To this end, Clifford has composed pretty gentle songs, but the lyrics are such that he’s necessarily singing only to himself, and as such, this may work just fine as a deeply personal project, but as entertainment it falls far short. To be fair, I doubt that was his goal in any case. Give it a whirl at danclifford.bandcamp.com.