Albatross’ Evolution, The Session at Caledonia and More Music News 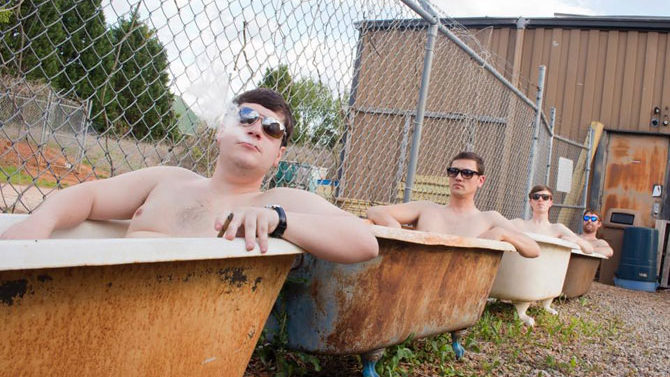 BIG BOY PANTS: Athens band Albatross, which I took to task a few months ago for having a name so incongruous with the smooth-jazzy, funky style of its Space Kitchen EP, may actually be growing into its name. A new EP named Nader Suite just came out, and it almost sounds like a different band. The tracks are just numbered “Pt. 1,” “Pt. 2” and “Pt. 3,” but on the first one the group does its ’70s-Pink Floyd best—with actual ripping guitar solos, even. On “Pt. 2,” careful listeners will notice a two-second copy of Floyd’s “Breathe” at the 52-second mark that’s repeated several times throughout. Additionally, the track begins with a solidly pretty piano melody, and when the guitars come in, the band fleshes the tune out nicely. It loses some steam by the time a funky bass and vocals arrive. The third track kind of continues with the theme and sounds very Dark Side of the Moon in overall mood. All these comparisons aside, I enjoyed this EP 1,000 times more than the previous one and encourage Albatross to continue in this heavier direction. Listen in at albatrossathens.bandcamp.com.

BRING YOUR OWN BRIDGE: College music/culture blog Hand Me the Aux is hosting a show at the Caledonia Lounge on Friday, Mar. 30. Billed as “The Session,” the idea is to present some of the new wave of Athens and Atlanta hip hop on the same stage to “bridge the 60-mile gap between the two cities.” To this end, the bill features Athens acts Javae and DK. From Atlanta, there’ll be Keenon Rush, Afropluto and Wiley From Atlanta.

THE VINYL FRONTIER: Tickets are on sale now for a special appearance by songwriter Lou Barlow (Dinosaur Jr., Sebadoh, Folk Implosion) at the Kindercore Vinyl plant on Saturday, Apr. 21. Although I think Barlow is a fine songwriter, this announcement is mainly to tip my hat to the hosts, not the artist. Barlow is planning on deeply exploring his back catalog, and will be telling stories and taking requests, too. There is limited space for this event, and tickets are priced accordingly, from $26.34 for regular general admission all the way up to $107.62 if you would like to get dinner with Lou and his dad. For more information and ticket links, see facebook.com/kindercorevinyl.

LEARNIN’ ’BOUT LAW: UGA Law Library folks Nina Guzman, Rachel Evans and Leslie Grove have a pretty cool podcast named “On Reserve,” in which they explore the ways the legal system affects different parts of life. The most recent episode includes interviews with Bertis Downs (R.E.M.), Scott Creney (Tunabunny) and Jason Cade (Hog-Eyed Man) talking about all sorts of stuff. All in all, it’s pretty good. Find it at ugalawlibrary.wordpress.com or on iTunes.

WHEN THE YANKS GO MARCHING IN: Former Athenian and Flagpole writer Marshall Yarbrough is bringing his New York band Rube to town to play The World Famous on Thursday, Apr. 5. It’s kind of a shambolic country-and-western sound that’s pretty easy to listen to or talk over. They’ll be recording a new album while in town, so if you see ’em and dig ’em, be sure to wave and say hey. Also on the bill this night are Peter Webb and Michael Potter. Hear for yourself at rubetheband.bandcamp.com.

GRADUATION TIME: The kids from the 2018 spring session of Nuçi’s Space’s Camp Amped after-school program will perform a showcase of their skills Saturday, Mar. 31 at 7 p.m. The show takes place at Nuçi’s Space. Camp Amped is known best for its summer program, where kids of all skill levels meet each other, form bands, write songs and display what they’ve learned at the end of the week. I fully expect that the after-school session is no different, so go to this planning on being impressed with what the musicians’ resource center is calling the “future of Athens music.” For more information, see nuci.org.