The Shut-Ups Get Rockin’, and More Music News 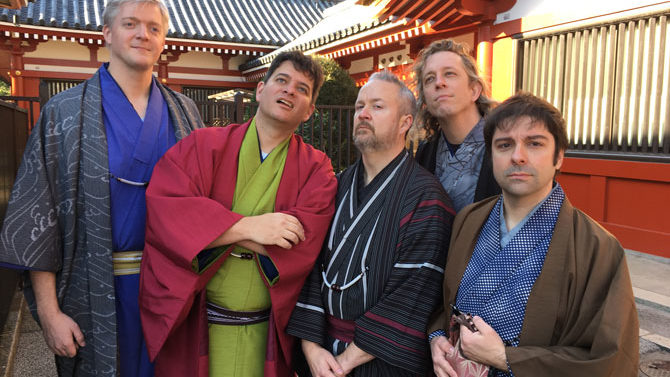 HUSH THAT FUSS: Those clever guys in Athens/Atlanta power-pop/new wave band The Shut-Ups are set to release their new full-length, Just Another Generation, Friday, Feb. 23 at Little Kings Shuffle Club. This is the group’s fifth album overall and, more significantly, its first since 2009. This new record was originally begun with the late Bill Doss (The Olivia Tremor Control, The Sunshine Fix), but only finished last year. The record is the most straightforwardly rockin’ album The Shut-Ups have ever done. Although it’s still fully ensconced in their world of biting lyricism and pop hookery, there are ’70s rock-radio-worthy riffs all over the title track and tunes like “Why Are We Gonna Die” (hat tip to the blink-and-you-missed-it cribbing of The Association). It’s a relatively short album for the band, clocking in at just about a half-hour long, which leader Don Condescending cheekily ascribes in a press release to the influence of growing up watching sitcoms. Also on the bill this night are Yallweh and a reunion show from mighty Athens trio Stuntdouble, which missed a previously scheduled gig due to illness. So, here’s hoping. For more information and loyalty oaths, see facebook.com/theshutups, and listen in at shutups.bandcamp.com.

GOWNS IN TOWN: A special night of acoustic guitar music will happen at The Foundry Wednesday, Feb. 21 courtesy of the Hugh Hodgson School of Music. Featured performers this night include soloists and various ensembles from the school’s guitar studio led by Daniel Bolshoy. A special appearance by Marc Teicholz (San Francisco Conservatory of Music) is also planned, and he’ll perform selections in the styles of jazz, classical and Brazilian. This night’s show is scheduled from 7:30–10:30 p.m., open to all ages and admission is free. For more information, see thefoundryathens.com.

EASY PICKIN’: The next installment of “Pickin’ at the Garden” takes place at the State Botanical Garden of Georgia’s Day Chapel on Thursday, Feb. 22. The featured artist this time around is guitarist Tomi Martin, whose recording credits include OutKast, Madonna and more. The event is divided into two parts. The first is a workshop and lecture at 4:30 p.m., and the second is a performance at 7 p.m. This event is free, but pre-registration is required. See botgarden.uga.edu/event/pickin-at-the-garden to reserve your spot.

SACREBLEU!: A new five-song EP named Pops is out now from Athens garage-rockers The Pierres. It comes courtesy of MOEKE Records and is available on cassette as well as digitally. The “garage” categorization, while traditionally appropriate, doesn’t give enough credence to the band’s actual songwriting. These aren’t three-chord bashers. Rather, they’re relatively complex tunes with a fair amount of jangle-pop flourish and some Dead Boys barking charm. There’s no over-reliance on distortion, which really lets the songs shine, and the use of empty space and breakdown during “Chicken Curry” is just tops. Dig it at thepierres2.bandcamp.com.

SLIP ’N’ SLIDE: Although he now lives in Atlanta, there’s still enough Athens on the new album by Richard Gumby to make some space here for it. The rest of his band still lives here, anyway. Largely written and recorded here in town, the album, mem’ree qoil, includes eight tracks that all pretty much hold true to the Gumby style. That is, each is some amalgamation of lo-fi indie-pop, self-styled R&B and/or homemade psychedelia. Unfortunately, for as crafty as it is, it’s not really something I can grab onto. It’s not that it’s intentionally slippery; rather, it’s a bunch of threads looking for a center that just isn’t there. The band next plays locally with Cult of Riggonia on Mar. 3 at ATHICA. See crasslipsrecords.bandcamp.com or richardgumby.bandcamp.com to listen in.