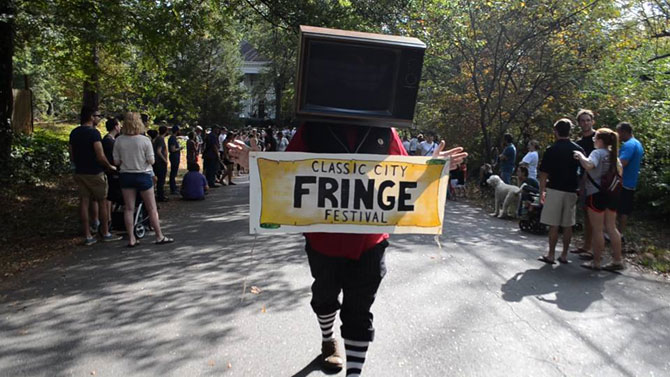 CIRCUMNAVIGATIONAL CIRCUS: Applications are now being accepted for the 2017 Classic City Fringe Festival. Although it was founded only a few years ago by Mux Blank, Megan Dunn and Marty Cronk, the collective years of performance and production experience between the three spans decades. “Fringe” means outsider art, experimental performance and non-traditional explorations of creativity. It’s not unusual or unacceptable for these expressions to employ traditional modes (poetry, music, visual art, theater), but to be on the fringe means to be a margin walker. Sometimes that margin lies smack dab in the spot between good taste and the patently enjoyable, but hell, I could name you 10 regularly booked Athens bands that unknowingly occupy this space already. This is a non-juried event, so the order in which applications are received is paramount. It’s booked on a first-to-apply, first-accepted basis. So head to classiccityfringefestival.com, get familiar with what’s going on, and see if it’s for you. Then apply. Any questions can be directed to classiccityfringefest@gmail.com. Stay social with the whole gang at facebook.com/classiccityfringefestival.

CLOSE TO HEAVEN: A special show will happen at the Georgia Theatre Rooftop Thursday, Aug. 24 featuring longtime Athens musicians William Tonks (Barbara Cue, Workhorses of the Entertainment/Recreational Industry) and Tommy Jordan (Men in Trees, String Theory). Eric Carter (Bloodkin) is a special guest. The show is billed as MrJordanMrTonks, which seems reasonable enough. Doors open at 6 p.m. One caveat, though: This is the first night of a two-night stand for songwriter Corey Smith downstairs in the main room. As that show is sold out, access to the roof will be severely limited. So, show up on time.

COFFEE BREAK: In related news, String Theory, now in its 24th year, brings its specialty blend of old-time and bluegrass to Hendershot’s Coffee Bar Friday, Aug. 25. They’ll start off the show at 8 p.m., and the night will close with a 10 p.m. set from the Broken String Band, which released its EP Prologue: Somebody’s Daughter earlier this year. For my money, the sweet spot lands right in the middle and pretty much justifies this entire paragraph, with the 9 p.m. set from Lassine Kouyate. That’s the name given to songwriter Adam Klein by his friends during his time spent in Africa, and the project name he uses when mixing his traditional latter-20th Century Americana songs with West African Mande music. You can listen ahead of time at adamklein.bandcamp.com; click on the album titled Dugu Wolo.

AT THE HOP: The UGA Swing Club and UGA Ballroom and Social Dance Club are hosting an open night of swing dancing dubbed Any Swing Goes! Friday, Aug. 25 from 7–10:30 p.m. The first hour will feature swing dance lessons, with the first half hour focused on East Coast swing and the latter focused on West Coast swing. That’s like the Biggie and Tupac of swing dancing. The social dancing begins at 8 p.m., and everyone is welcome to participate. This all happens at UGA’s Memorial Hall ballroom. See facebook.com/ugaswing and facebook.com/ugaBSDC for more information.

HEADS UP: Athens rapper Donny Knottsville quietly released his newest album, Celestial Seasons, in the middle of July. Conceptualized as a proper album as opposed to a mixtape, Knottsville produced the record with engineer Joel Hatstat. Fully 10 out of the 14 beats were composed and performed by the pair under the moniker Studebaker Assassins. Outside of this, the record features a veritable all-star cast. Additional beats were provided by The Nice Machine, Cubenza and Eric “Riled Up” McDowell. Guest appearances include Sienna Chandler (Monsoon), Chris Vanderford, Paul McHugh (Pilgrim), Thom Strickland (Smokedog), Svetlana Rostova and Brian Veysey. Knottsville’s vocals are, as always, pretty unassailable, and he makes as quick work of speed racers like the jittery “Test Patterns” as he does the confidently hilarious celebratory anthem dedicated to, um, a woman’s, uh—well, you listen to it—“Power U.” Musically, it shifts seamlessly from syrupy slow jams to funky psychedelia to outer-space backpacker jams. The amount of work that went into this is obvious when listening, and y’all are henceforth encouraged to do so. Check it out at donnyknottsville.bandcamp.com.