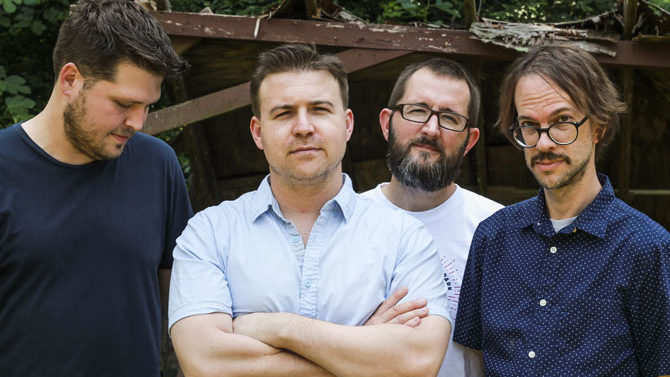 WELCOME: It’s college time in Athens, and for those of you reading this column for the very first time, let me welcome you to town. Do yourself a favor and check out the incredibly wide swath of music available here for both listening and enjoying live, and if you’re so inclined, start making your own. Go out, meet people, and talk to other musicians. This is how 99 percent of all Athens bands make their start, so don’t feel weird about it. Let’s get to this week’s music news…

GRADUATION DAY: The Salt Flats will release their first music in over four years Friday, Aug. 18 at the 40 Watt Club. Also on the bill are Hot Fudge and The Arcs. The new full-length is named Cloud to Ground, and it starts off nicely with the mid-tempo, smooth-as-butter “In Dreams,” which channels a bit—but only a bit—of 1990s New Radicals and also a decent amount of non-pathological Afghan Whigs territory. The title track is a stupendously driven, nearly spaghetti-western tune that, incredibly, uses its whammy-bar guitar solo in a completely uplifting way. Actually, that supremely effective lead guitar is a hallmark of the entire record. There’s zero dumb wankery. Everything is purposeful and serves the songs. I’m not nuts about the slower songs, like “Cut Your Eyes” and “Pretty Jittery.” But overall, it’s an album that should appeal nicely to both songwriters and those who wish to write songs. By the time you read this, Cloud to Ground should be available over at saltflats.bandcamp.com, but if it’s not, wait a few days or get off the couch and go to the show. Be a fan at facebook.com/SaltFlatsLive.

TO THE FRONT: Marching Banana Records released the debut EP by Taber Lathrop last month, and it’s a veritable all-star affair. Its gestation began a long time ago, with JoJo Glidewell recording it toward the end of 2014 then mixing it in 2015 and early 2016. It features appearances from Trent Johnson, Drew Kirby, Abby Gregg, Matt Anderegg and Trey Rosenkampff. When he’s not writing and recording, Lathrop works as lighting director and “costume slinger” for of Montreal. To his credit, very little of that influence is here, which is a difficult thing to achieve given that most people tend to mimic what’s around them. The opening track, “The Hunter in You,” is almost like a false start, because its poppy embraces aren’t at all what comes later. We don’t actually get into the moody meat of the thing until about half a minute into track two (“I Heard”). With the exception of its Wings-inspired intro and outro, it’s a track any Gram Parsons fan would find a good listen. I think the next two songs (“I Try” and “Every Moment”) are the best ones here and display Lathrop’s talent the best. Overall, this still feels like less of an EP and more of a demo of styles. Still, it’s not a bad place to begin. Check it out at marchingbanana.bandcamp.com.

NIGHT MUSIC: Composer Brent Jackson, working under the project name Dressdown, just released a massive double album named Chimeric, Vol. 1: Narrow One and Chimeric, Vol. 2: Glass Veins. The two instrumental records purport to contain the stories of two different characters and “deal with strange nightmares, suppressed imagination and the feeling of a malicious foreign presence within oneself.” Jackson achieves this to wonderful effect. Using computer technology and guitar, he writes gorgeous, thoughtful and occasionally disturbing music that begs for a late-night headphones session. The first volume is easily the most emotionally astray of the two, with its styles and components moving quickly around from blissful soundscapes to rhythmic palpitations to the final track, “Dark Circles,” which is as ice-cold and lonely as anything you’ll hear this summer. Vol. 2 is much more linear in its melodic approach and, when taken together, more immediately digestible. In imperfect terms, the first is more anxious and the second is more resolute. Check these out at drssdwn.bandcamp.com, and follow along at facebook.com/drssdwn.

HOLY SHIFT: The UGA Music Business Program is seeking to place 100 interns around town this semester. The list of possible work areas is long and can include things such as touring bands, merchandise companies, show promoters, night clubs, publicity firms, etc. If you’ve never had an intern but think your business qualifies, go ahead and take the chance. Sure, some will be just terrible, but that’s the nature of the beast. Others will be quite grand, and both of y’all will be better for the experience. Drop a line to David Barbe via mbusinterns@gmail.com if you’re interested.