Shehehe Is Here to Save Your Summer, and More Music News 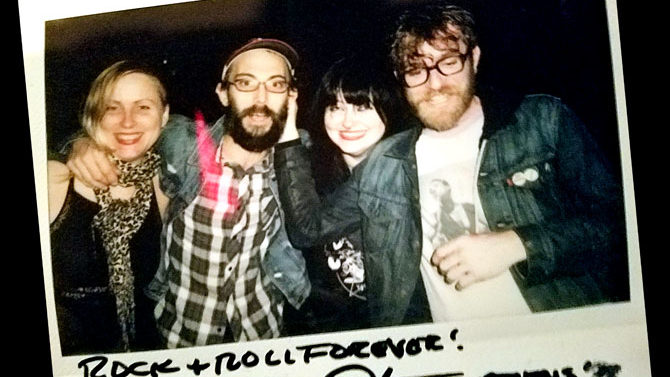 SATURDAY NIGHT’S ALRIGHT: As promised, here’s more information about the new Shehehe record. It’s titled Endless Summer, spans a relatively mammoth 14 tracks and comes courtesy of Laser Brains Records. This is the tightest and best put-together release Shehehe has ever been party to. Everything here is well executed, rehearsed and tautly composed. Fans will recognize the band’s varied influences, but those are starting to shed like snakeskin as Shehehe coalesces more and more into a self-contained unit that just, well, sounds like itself. The huge doses of ’70s-ish four-part punk are totally up front, but there’s a gigantic power-pop flag waving, too. For example, “Sorry You Love Me” and “Dirty Life” can go head to head with any badge-wearing bowl-cut boy band that ever darkened Stiff Records’ door. Throw this in the car stereo, pick up your pals, and go drive around town lookin’ for a party to crash. Technically, it comes out Aug. 11, but hell, just grab it at the release show the next night, Saturday, Aug. 12, at the 40 Watt Club. Palace Doctor, The Grawks and Twinki round out the bill. For more information, see facebook.com/sheheheband, and listen in on the back catalog via shehehe.bandcamp.com.

ENCOUNTERS: Michael Potter (Null Zone Records, The Electric Nature) has picked up the baton of hardest-working experimental music promoter in town and run with it. He’s been steadily if relatively quietly promoting superb bills that deserve attention. To wit, his next show happens at Go Bar Friday, Aug. 4 and features guitarist Tashi Dorji (Bhutan) and his project MANAS, a duo with Thom Nguyen (Nest Egg). Check ’em out at tashidorji1.bandcamp.com. Also on the bill are Goddess Complex, John Fernandes, Killick Hinds with Monique Osorio and Potter himself.

SHINE A LIGHT: Hard-working punks Burns Like Fire return to releasing records this month with the digital slip of Always in Trouble. This six-song EP can be streamed at soundcloud.com/burnslikefire. A proper vinyl and CD release will happen Sept. 30 at the Caledonia Lounge, followed by small runs of shows around the East Coast. As always, Burns Like Fire does rapid-fire melodic punk as good as anyone and better than many. Close observers and punks over 40 will immediately get the jokes in the titles “30 & Miserable” and “Rock the Cash Car,” but the record does its best musically on “Busted” and “Final Farewell.” Follow along at burnslikefiremusic.com and facebook.com/burnslikefiremusic.

TWO IN THE HAND: Recently, my memory was jogged into remembering how common two-band bills were long ago in Athens. Now, many shows are packed with three or more bands, which is ironic, considering there are exponentially more stages in town. But if you want at least a small taste of how things used to be—starring some people who were actually there—head to the 40 Watt Friday, Aug. 4. The newly refreshed Dashboard Saviors will play with that eternal flame of Athens rock, Hayride. Also, listen up: Dashboard Saviors were actually the very first band to ever play this location of the 40 Watt. No one remembers this, but it’s true. Go ask ’em. They’ll tell ya.

SHHH: I want to say congratulations and wish lots of fun to our local pals heading off to play Birmingham, AL’s Secret Stages Festival, which runs Aug. 4–5. Lingua Franca, Blunt Bangs and :lovesongs will represent the Classic City and, presumably, do a fine job of it. For more information on Secret Stages please see secretstages.net.

CORRECTION: A couple of weeks ago I told you about Elbys Bolt, the new record from Boycycle, but erroneously reported it contained five songs. It has eight songs.