The Jersey Barrier Returns With a Thoughtful New Album 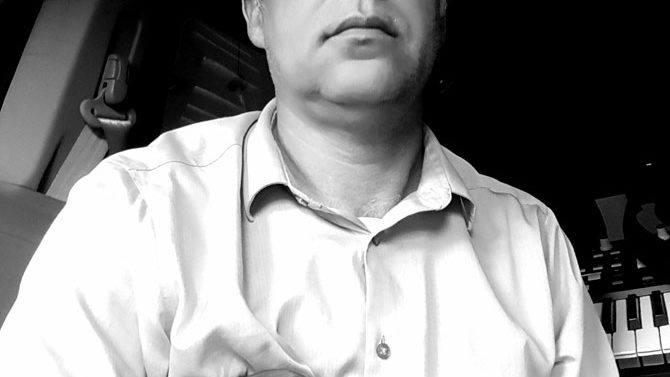 BEFORE SUNRISE: Songwriter and engineer Greg Harmelink (Kincaid) has been one of my top 10 Athens vocalists for over two decades. He’s got this timbre that has never failed to hit right on the edge of the two-sided coin of bliss and despair, and his songs have always matched it pretty perfectly. His project The Jersey Barrier was last heard from almost a decade ago. On Valentine’s Day, Harmelink finally released a new batch of songs, Little Matters, which is such a perfect double entendre of a title I can’t stand it. Recorded during 15-minute sessions in his van during breaks at work, this batch of songs is tender, thoughtful and doubly realized such that it comes across as alternately resolute and resigned. He uses a decent amount of discernible electronics, most spectacularly on “Clocks” and “Orange Juice and Ice Cubes,” and “Every Other Thought” dives right into early-1990s U2 territory. For easy reference, Harmelink’s songs fit alongside Seam, Mineral and the like. Do yourself a favor, though, and find your own connection. For further edification, find your way to thejerseybarrier.bandcamp.com.

HEAD DOWN: The next occurrence of AthFactor Entertainment’s First Tuesdays happens Tuesday, June 6 at The World Famous. Co-Host Chief Rocka serves as record selector, setting the house vibe, and the other hosts, Montu Miller and Kaliko, will be on-site, well, hosting. This show also welcomes back guest co-host comedian Pauldoe Waldo (aka Quincy Brooks). First up this night is the ongoing Beat Wars at 9:30 p.m., featuring DJ London vs. Official and Lil Booly vs. Teach. The rest of the show kicks off at 10:30 p.m. with poet Daniel Mapp and performances from Azi, SG Keezy, Chrismis and Y.O.D. A headlining performance from Squalle, who’s releasing his new single “Important,” caps everything off.

HELP NEEDED: Bernard Pearce, a former member of Athens supergroup Dark Meat now living in New Orleans, needs your help. He’s currently in what doctors are saying is the final stage of congestive heart failure. First diagnosed approximately two years ago, Pearce has made great strides toward getting control of his situation, and there is still hope as we speak, but the financial burden is unbearable. In addition to his medical bills, he has two sons, age 17 and 14, with the oldest heading to college and the youngest entering high school, and no means of income right now other than Social Security disability. Any size donation is appropriate, so please visit gofundme.com/bernardpearce and do what you can.

NEW NOTES: Sneaking in just before we start to feel the summer is Wild Abandon, with a new EP titled—I suppose ironically—No Name. Jesse Kennedy really channels his inner OMD sensibility for opening track “Sunday Mornings,” but with a tad more frenzy and, undeniably, less fidelity. The second track, “On and On,” is bleh and arid and totally skippable. The third and final track, “Never Happier,” strongly revisits the influence of the first song and throws in a good measure of Gary Numan and Love and Rockets to boot. These three songs are the most clearly 1980s-impressed of any of Kennedy’s released work so far—so much so that they seem to have others’ fingerprints all over them. That said, they also seem more like sketches for something else and less a full-on proper release. And as far as sketches go, they’re not bad in any way. Check ’em out at yrdarcyswildabandon.bandcamp.com.

BORN TO RUN: I don’t really talk a whole lot of politics in this column, and I’m not about to start now, but I do want to give a big shout out and congratulations to Tommy Valentine. Although best known for many years in Athens as a show promoter and hip-hop impresario, he’s become known to a new generation of friends and fans as a thoughtful, constructive voice in Athens politics and the community. Last week, Valentine announced his candidacy for Athens-Clarke County commissioner for District 9. It’s nice to see him staying true to his music roots with the inclusion of both the aforementioned Miller and Mariah Parker (Lingua Franca) on his campaign team. Currently, Valentine hosts the public-affairs radio program—appropriately named “The Tommy Valentine Radio Show”—on WXAG 1470 AM/92.7 FM and is in the final stretch of completing his PhD in public administration at UGA. For more information, see tommyvalentine.com, tommyforathens.com and facebook.com/tommyforathens.