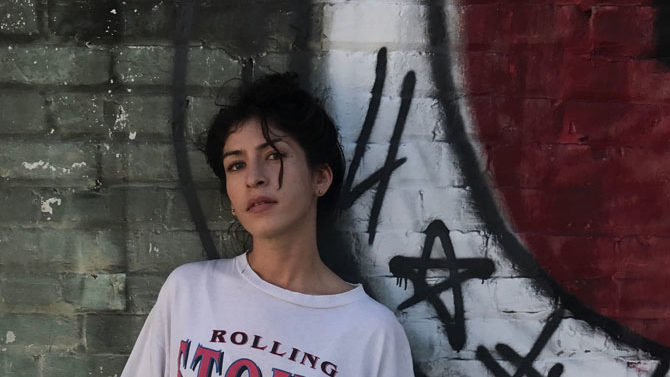 SIX SHOOTER: Songwriter, musician and visual artist Dagmar Vork is releasing a six-song EP named Freak Bathe Sank. At first blush, it’s a fairly simple affair with minimal percussion, tunefully out-of-tune melodies and an overall DIY arts-and-crafts vibe. While charting no new territory for the form as such, it marks its own spot in a decisively strong way. Careful listeners will recognize the cosmic connection between opening track “Tommy’s Head” and “Joe Lies,” Lili Taylor’s classic performance in director Cameron Crowe’s Say Anything. If these tracks were fully fleshed out into traditionally rock arrangements, their depth of melody and sense of texture would be obvious. As presented, they’re subtly magnetic, and I felt myself drawn back to them repeatedly. Not everything is secret about this, though, as listeners will be hard pressed not to get sucked into the deliberate swagger and sway of “Hot Pickle” and Cobain-isms of “OMW.” Freak Bathe Sank is out on tape May 11 via Star Rats Records, but you can preview and pre-order at dagmarvork.bandcamp.com.

WILD GUMBO: Wildly eclectic pop-rock band Swamp will celebrate the release of its new album, Funereal Tymes, Thursday, May 4 at The World Famous. The bill this night is basically the entire Swamp aesthetic writ large, too. The seemingly divergent lineup of openers—including New Orleans punks Casual Burn, hip-hop collective Space Dungeon and the often weird-for-the-sake-of-being-weird Saline—should coalesce into either a total, uh, swamp or be a super neat convergence of styles. It could go either way.

LEND AN EAR: In the interest of denying anyone having cause to say “I had no idea this was happening,” let me be the first to alert you that Elephant 6 creative playthings The Music Tapes will return to Athens Saturday, May 27 at the 40 Watt Club. The Music Tapes remain something of an acquired taste—even after almost 20 years—due to founder Julian Koster‘s tendency to create delicately woven pieces far removed from the relatively easy-to-digest psych-pop for which E6 is known. But once you’ve developed a taste for it, the musical experience is potentially among the most rewarding and edifying you’ll ever have. Grab your tickets and have fun. For more information, see facebook.com/theorbitinghumancircus and 40watt.com.

TAKE FIVE: Contemporary jazz group The Whitehall Jazz Collective will appear on the Georgia Theatre Rooftop Saturday, May 6 from 8–10 p.m. The show is free and early, so your excuses are limited. The group has performed regularly at Hendershot’s, where they’ve established a decent sized audience, and if you’re totally unfamiliar with their smoothly played and multi-styled offerings, there’s no shortage of live videos on YouTube for you to check out. Find more information at facebook.com/whitehalljazzcollective.

THINK DIFFERENT: As detailed in this week’s issue, the 39th annual Athens Human Rights Festival will happen Saturday, May 6 and Sunday, May 7. Although the AHRF was once among the only truly galvanizing events in downtown Athens—and, to be fair, one of the only downtown events, period—the festival has seen its popularity wane in recent years, in need of an infusion of young blood. Mere days from start time, the organization’s website was still “under construction,” and its Facebook page is barely there. Thankfully, Athens legends The Squalls were kind enough to let fans know they’ll perform Saturday at 1 p.m. Other performers include Universal Sigh, Working Class Heroes, Klezmer Local 42, Caroline Aiken & Catch a C.A.B., Adam Payne, Fat Arm Daddy, Reverend Conner Tribble, Timi & Wonderland Rangers. Cross your fingers if you head to facebook.com/AthensHumanRightsFestival or athenshumanrightsfest.org, and don’t say you weren’t warned.