The Orange Constant Looks for Its Own Language, and More Music News 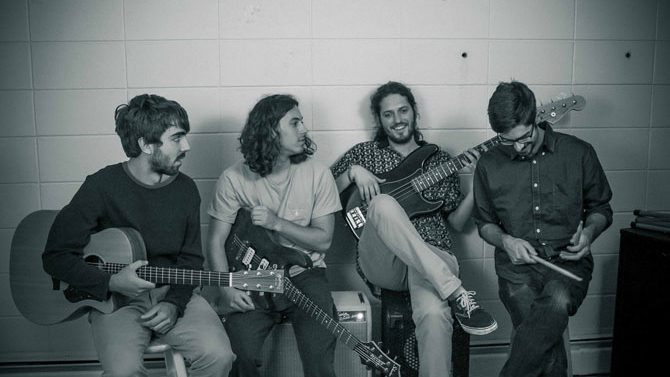 RHYMES WITH: This week, Athens-via-Statesboro band The Orange Constant celebrates the release of its new album, Point of Reference. The song getting the most pre-release push, “Something We Can Use,” holds true to the album’s title in that it’s utterly covered in paint created by U2 circa 1982. Even the horn section can’t fool the discerning listener. The band is much more in its own element on the subdued, noir-ish “Foolish,” the ’70s R&B of “The Fountain” and the desert breeziness of “Starting to Show.” They still lose me on the jam-band stuff like “Sir Martin,” though. There are too many different styles—each already well defined by others—happening here to form a recognizable sound. Although the band is clearly fluent in multiple rock and roll (and related) languages, they’d be better showcased if the group could speak in fewer and, eventually, find its own. The album comes out Mar. 24, but the release show is Wednesday, Mar. 22 on the Georgia Theatre rooftop. Hit the social scene at facebook.com/theorangeconstant, and look for the album to appear at theorangeconstant.bandcamp.com.

ALL RISE: The 2017 Athens Hip Hop Awards ceremony happens Sunday, Mar. 26 at the Georgia Center’s Mahler Hall. This is the fifth annual event, and tickets are $15 in advance and $20 at the door. The breadth of talent spread across the 25 categories reflects the pretty incredible year we’re had in the Athens hip-hop scene. Even if you can’t attend, I’d encourage you to check out the list, start clicking around and listen to what’s been happening. Nominees, please note that the organizers need you to RSVP as soon as possible if you are attending, so do that. For all other information and ticket sales, see ugalive.com.

BEEN STRINGFELLOWS: Athens folk group The Broken String Band released its debut EP, Prologue: Somebody’s Daughter, a couple of weeks back. It’s a mere five tracks, but that’s enough to impart what the band is trying to do, and after listening to this a solid three times in a row, I’m pretty sure the group is aiming straight for the middle. There are enough folky/Americana elements here to place the band in the genres it seeks, but the most overwhelming thing about Prologue is its lack of personality and overall facelessness. The band’s online bio notes its “thrashing banjos, iconic harmonies [and] stompy percussion,” and certainly sometimes things are lost in translation, but these elements seem to have been lost during the walk from the stage to the studio. Judge for yourself over at thebrokenstringband.bandcamp.com, and if this is your thing, be a fan at facebook.com/whatisabanjo.

KEEPIN’ ON: For a limited time, you can grab a free download of a new Five Eight single off the group’s upcoming album, Songs for Saint Jude. “Kids” is much looser and free-flowing than the claustrophobic, tightly wound tunes for which Five Eight is generally known. The album comes courtesy of Austin, TX label Chicken Ranch Records, and will include selections from previous releases plus a live version of “Doubter,” from 1997’s Gasolina! The band next plays locally May 12 at the 40 Watt Club. Grab your single over at noisetrade.com/fiveeightath, and follow along via facebook.com/fiveeightathens.

LIL’ BITS: You can now listen in on both of the original songs featured on Eureka California‘s latest 7-inch single. “Wigwam” is much more of a low-grade garage rocker à la The Oblivians, and the other tune, “Only Birds, No Feathers,” pops up with the band’s signature melodic guitar tunefulness. To hear the third track, a cover of Superchunk’s 1990 single “Slack Motherfucker,” you’re gonna have to throw down the measly three bucks. Eureka California returned from a string of dates for a homecoming show Tuesday, Mar. 21 at The World Famous. Outer Spaces and Marathon States shared the bill. Check out the new music at soundcloud.com/hhbtm-records, order at HHBTM.com, and be a pal at facebook.com/eurekacalifornia.