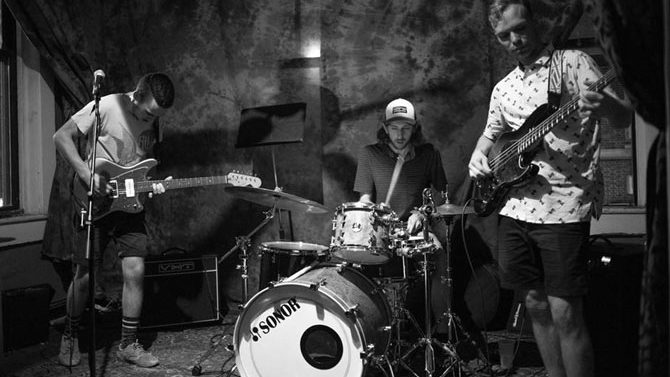 STOP, LOOK, LISTEN: After teasing the world with a two-song demo last year, Einschlagen released its debut full-length, Not Angry, Disappointed, this week. Through its 10 songs, the band deftly and defiantly repurposes the best of latter 20th Century thinking person’s rock and roll. Yet for all its touchstones, Einschlagen appears to have arrived at its mix of heady instrumental/introspective house-party dance-floor rockers (“D.O.V.,” “Foraging,” “R.I.P. Doctor Grimm”) and dreamy pop (“Wolf Tooth,” Not Your Fault,” “Cookies for Kathy”) independently. The band also fleshes out the track “Pizza Face” in a way that’s as satisfying as the demo version, albeit a tad on the nose with regard to studio trickery. Newly added to the group’s previous trio format is vocalist Aubry Meers on a handful of tracks, as well as Peyton Sarah performing the spoken-word part of “Embodied.” Throughout Einschlagen’s existence, member Taylor Chicoine has steadily helped to build and support a new stable of Athens artists via shows at his Pity Party Social Club and his label, Perfect Attendance Records. As far as scene-building and sense-of-community are concerned, the band is well situated within a group of similarly minded folks. However, as a discrete creative force, Einschlagen is currently without peer. The band plays a release show Saturday, Mar. 18 at Hi-Lo Lounge with Pansy and Fake Flowers. Grab the album over at einschlagen.bandcamp.com, and pat a back at facebook.com/einschlagen.

SEEIN’ RED: Longtime Athens rocker Zack Hembree (Music Hates You, Stone Mountain Freeway) will unleash his new band’s EP Friday, Mar. 17 at the Caledonia Lounge on a bill shared with Vincas and Maximum Busy Muscle. Although based in Atlanta, this new group, Toro, secures its Athens ties via the inclusion of Hembree, whose local bona fides are never in question. Unlike his past groups, which largely situated themselves with a solid in-yr-face attitude and persona, Toro explores a more introspective direction. Its particular brand of progressive metal is abrasively tuneful (“Bury Me Then Flee”), dramatically composed (“This Hell Is Real”) and technically proficient in a way that’s difficult to describe but easy to appreciate (“Painting With Shadows”). On this EP, titled Departure, the band enjoys the rare success of a soft, short interlude via the title track, which sets up the delivery of the final two songs. Many attempt this, but few succeed. Toro does. Check it all out at torobandatl.bandcamp.com.

NEW WORK: The UGA Hodgson Singers will perform a new work by Austin, TX-based composer Craig Hella Johnson Friday, Mar. 17 at the Performing Arts Center’s Hodgson Hall. Johnson and the choral group he founded, Conspirare, were 2015 Grammy winners for their sixth album, The Sacred Spirit of Russia. This new work is titled “Considering Matthew Shepard.” Shepard, a gay 21-year-old student at the University of Wyoming, was severely beaten the night of Oct. 6, 1998 in Laramie, WY and died of his injuries six days later. The performance this night is led by Johnson at the piano, and will feature vocals plus a chamber ensemble. Tickets are $20 and may be purchased at pac.uga.edu.

DOUBLE EXTRA: WUOG 90.5 FM will host a rooftop show at the Georgia Theatre Thursday, Mar. 16 celebrating the upcoming release of Youth Music by Georgia/Chattanooga band—excuse me, “entertainment and media project”—Superbody. And that’s fine as far as that goes, even though Superbody is kinda blandly predictable, artless and derivative in that keyboard-boy way that re-imagines the 1980s as some sort of Day-Glo pop wonderland absent AIDS and the never-ending threat of nuclear war. I fully recognize the world today is, to put it quite mildly, less than desirable, but God, people, dig your own hole to escape into and stop scraping the bottom of Ronald Reagan’s barrel, for cripes’ sake. Even so, punters can catch a set by Marshall Moore (aka The Quiet Pack) and DJ Tears of Joy, stylized for print as DJ :’). It’s free, too, so, yay, socialism.

TRY IT ON: If you’ve ever caught the popular Grassland String Band and thought, “Man, I sure do wish it were me up there singing!” you might be able to make that dream come true. Founding member and lead vocalist Michael Lesousky is departing the group, and the band is looking for a replacement. The field is wide open to males and females of all ethnicities. A full statement on Lesousky’s amicable departure and information you’ll need to audition can be found at  grasslandstringband.com.