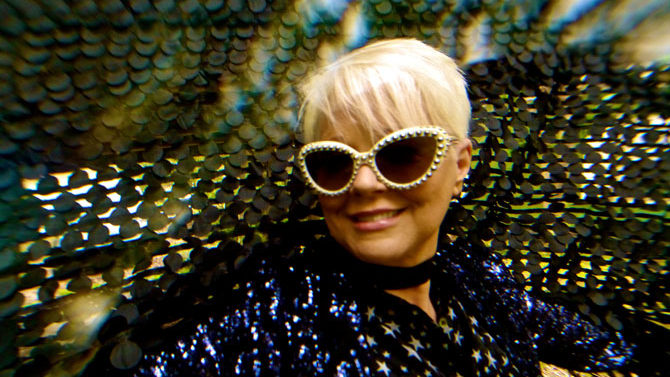 ROCKET THROUGH THE WILDERNESS: Cindy Wilson (The B-52s) is up to a lot these days. After making a special appearance at Girls Rock Athens’ International Women’s Day showcase at The World Famous on Wednesday, Mar. 8, she’ll head out on a short tour—including dates in Atlanta, New Orleans and Houston—en route to South by Southwest in Austin, TX, where she’ll perform a handful of shows and do a live interview with writer Paul de Revere. Notably, she’s headlining the annual Athens in Austin party Saturday, Mar. 18, which you can read more about here. In related news, The B-52s will appear with the Atlanta Symphony Orchestra Friday, Sept. 17 at Atlanta Symphony Hall, and tickets are already on sale. For more information on this and that, see facebook.com/CindyWilsonMusic and theb52s.com.

WE MADE OUR REPUTATION DOING IT THAT WAY: Even though it won’t be released worldwide until June 16, if you were of the mind to score a vinyl copy of the new release from Lavender Holyfield, you could grab it locally at Wuxtry Records. The eight-song album is titled Rabbitboxing Midnightmouth, and comes courtesy of Cloud Recordings. As fans and those familiar might imagine, it’s a blissfully psychedelic affair heavily attuned to its lineage, both in terms of its personnel (members of Bubbly Mommy Gun, Olivia Tremor Control, Circulatory System and the New Sound of Numbers) and its label. The album shows its own personality most strongly on the propulsive “Private Opera Ultramarine” and the AM Gold-ish “Where Do Those Lasers Go?” Each LP comes with a download code, too, so you can keep modern. For more information, see cloudrecordings.com.

SING ME TO SLEEP: Composer Jesse Kennedy has returned, via his Wild Abandon project, to grant us a proper winter. I can see how some might attribute other seasons to this new album, titled Introsensual, but its gentle sense of melody, impeccable pacing, hidden humor and overall keeping with Wild Abandon’s tradition of gauzy, half-awake bliss feels wintery to me. For the uninitiated, Wild Abandon fills the space on your shelf near—although it’s notably distinct from—Washed Out and Millionyoung. Kennedy is a fine lyricist, too, even while exploring well-worn ground on tracks like “Every Girl in the World” and “Lisa’s a Mermaid.” He even grants some consolation to the memory of human garbage dump GG Allin via his cover of “Sitting in This Room.” Bide your time for May flowers at yrdarcyswildabandon.bandcamp.com.

JUST SHOOT ME: Echobass Records just made its first serious error in judgment by releasing Thanks Michael by duo Dremmy Droopers. It’s two dudes with acoustic guitars floundering through seven songs that are significant in no specific way other than being barely composed and awfully realized. If you ever lived in a dorm, these were the guys making the racket in the stairwell. The whole thing sounds like it was recorded via a telephone in a backpack while hotboxing a dirty Geo Prizm. By the time it all winds down to the double shot of “I Fucking Love You” and “Let’s Get Drunk,” any reasonable listener would be forgiven for calling the cops just to get this music outta their house. If you ever needed a recorded example of what it’s like dealing with those last two guys that just won’t leave a party, grab a copy at echobassrecords.bandcamp.com.

HELP OUT: This year’s Classic City Showcase benefit for the Leukemia and Lymphoma Society happens Tuesday, Mar. 14 at the Georgia Theatre. Tickets are $15, and sponsoring organizations are the UGA chapters of Sigma Alpha Epsilon, Phi Gamma Delta, Sigma Nu and Sigma Chi. Featured acts are Harvey Funkwalker, The Orange Constant, Odd Street and Of Good Nature. A raffle of UGA football merchandise will also happen. For tickets, head to georgiatheatre.com and lay your money down.

TRAP HOUSE: Long-running Athens rockers Rat Babies have a new EP—their first release since last June—out this week named Speak Hard Answers. Well, it’s new to everyone who didn’t buy it on the group’s last tour, at least, during which it reportedly sold out of all the physical copies. So unless you grabbed one of the limited new copies at the release show last week, you’re gonna have to eat digital. They’ve made that very convenient by hosting it over at thecompleteguidetocaringforyourratbabies.com. Keep up with the rats at facebook.com/ratbabies.