Killick’s at It Again, Vic Chesnutt Songwriter Award and More 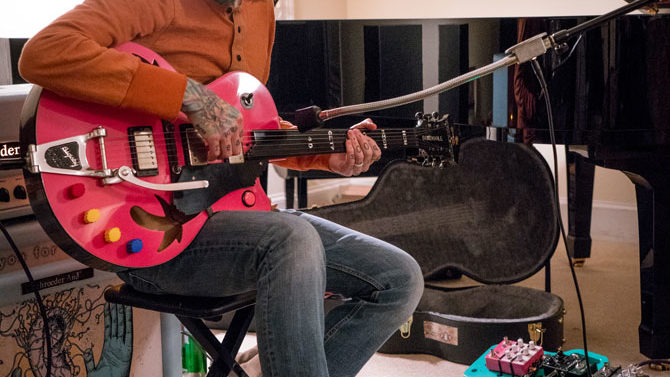 START YOUR ENGINES: It appears 2017 is going to be another exceptionally prolific year for Athens expérimentateur suprême Killick Hinds. Foregoing the fact that he released a short record last month—The White Hair Grows Faster Than the Red Hair, which sounded more like a demo than a considered album, between its guitar-only instrumentation and heavy-handed digital manipulation—he appears on three new collections this month, two of which he recorded in a single day, Feb. 12. Killick collaborated with flautist and shaman Beto Cacao for The Art That Gives Us Strength to Face the Tyrant, and it’s credited to The Art. The six-track album begins—and mostly remains—exceedingly gentle, and the compositions are flute-driven, with Killick’s guitar following Cacao’s path. The breathiness of the playing lends it a steady physicality without overt masculinity—especially, for example, after the 4:50 mark of “Outer Space Is Better.” All proceeds from sales of this record will be donated to the Athens Immigrant Rights Coalition. Next up is Zero Depravity, credited to Garfield Minus Hetfield. Here, Killick collaborates with drummer Kathleen Duffield (Crunchy). It’s nine tracks of improvisational “punk rock,” which is recognizable as such in the spiritual sense of the term but not at all in the vernacular. The most pleasing parts to me are when they get really weird (“Hetfield, New Jersey”), sparse (“No Relegation”) and into frenzied dissolve (“Zero Depravity”), and much less so on the tracks that resemble traditional rockers. Find both of these at killick.bandcamp.com.

TIME OUT: A new recording is out by the jazz-oriented experimental trio Thunder O(h)m!—the aforementioned Hinds on guitar, pianist Brad Bassler and drummer John Norris—titled Glyphclanger. It’s a single-track, 38-minute recording done live in Bassler’s home. While all members have played together in other projects, Thunder O(h)m! remains a personal favorite largely due to Bassler’s piano playing, which is forceful yet nuanced and purposeful. The section from 4:29–7:00 is just stunning in its clarity and drive, and sets up the entire recording as a thing of beauty. Of course, this record is all of a piece, so it’s a bit brutal to chop it up this way. At any rate, take the ride at killick.bandcamp.com and see if you don’t agree.

NOW’S THE TIME TO SCRATCH IT: The Classic City Rotary Club will present its first annual Vic Chesnutt Songwriter of the Year Award at The Foundry on May 11. The nomination field is open until Mar. 31, and the criteria for submitting a song is pretty simple. Any genre is allowed; artists may self-nominate; the song must have been released during 2016, be publicly available and posted to Soundcloud for judges to hear; and the artist must live in the Athens area, meaning Clarke or its neighboring counties (Oglethorpe, Madison, Jackson, Barrow and Oconee). The judging panel will include a range of music folks with expertise in various areas. The winner of this honor walks away with not only the, uh, honor, but $1,000 to boot. On a personal note, I think this is a very sweet way to remember Chesnutt, who died in December 2009. He was both internationally beloved and far too often taken for granted locally. Here’s to keeping his memory alive. For more information on Classic City Rotary, see classiccityrotary.org and facebook.com/RotaryCluboftheClassicCityofAthens. To submit nominations, go to tinyurl.com/RotarySongwriterAward.

HEART AND SOUL: Straight-up rock-and-roll band Falco Brown, which is quite good at being a straight-up rock-and-roll band, is on a path to record three “short” albums this year. (I would traditionally call them EPs, but I’m using the band’s term.) The first of these is the four-song New Old Stock, Pt. 1. From its cover art—which is clearly inspired by The Monkees’ soundtrack to its film Head—to the actual songwriting, it’s clearer here than on previous releases how indebted Falco Brown is to that which came before. That said, there’s a lot of credit due to the group for having a stylistic fluency that renders its influences as merely that and not, you know, gods. Now, I’m never gonna go nuts over something like the brow-beating wah-wah guitar solo in “Secrets,” which lands like a turd in an otherwise tasty Replacements-ish punchbowl. But the opening track, “Chasing My Heart Around,” is easily as solid as anything recorded by, say, Wilco, et al. Take a listen at falcobrown.bandcamp.com, and visit at falcobrown.com.