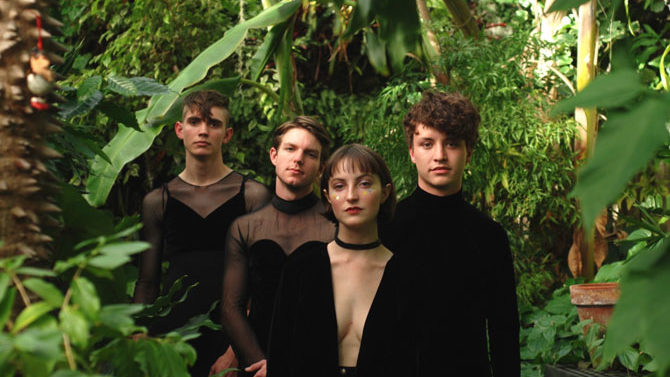 FOUR CHORDS GOOD: The most astonishing thing about the new five-song EP from Pansy is that you can throw it on and instantly imagine that the past 35 years never happened. This self-titled release has its heritage in 1977–1982-era punk and, more specifically, West Coast punk. The band paints its portrait with mostly minimally distorted, four-chord guitar rhythms and simple beats. The vocals are split between guitarist Zach Broe and bassist Frances Newton, and the difference between their styles and ranges often makes Pansy sound like two different bands. Importantly, I don’t hear anything on here that speaks to any direct influences, but rather an overarching vibe, if you will, and aesthetic. There’s shades of The Bags, The Flesh Eaters and, to a much lesser extent, Germs. It’s a cool little release recorded by Marshall Moore (The Quiet Pack), and you can grab it at pansytheband.bandcamp.com. Be a fan at facebook.com/pansytheband.

NOW FEAR THIS: The previously released compilation Exterminate All Rational Music from experimental label Null Zone is now available on cassette via nullzone.bandcamp.com. The album is a real treat for noiseniks, and features Tom Smith, Clang Quartet, Alec Livaditis and many others. The label reports that all proceeds from digital sales and 10 percent of proceeds from physical sales are earmarked for donation to the Southern Poverty Law Center, so you can feel pretty good while feeling pretty bad. Early next month, Null Zone will release new tapes from label owner and The Electric Nature member Michael Potter and Bleachy Asshole (Thom Strickland of Smokedog), and at least one of these is already the winner for worst name from an Athens project this year! Both have release dates of Mar. 3, so hold your breath and click yourself over when ready.

IT’S ALWAYS MIDNIGHT SOMEWHERE: Daniel Tanghal has, at least for three songs, revived his previously-retired project Meth Wax for a new EP titled 420Tears. Once again, Tanghal handled all the playing and writing and, also once again, he’s provided three sweet bits of fuzzed-out, half-buried bliss. The peak comes, appropriately enough, with the middle song “I Don’t Know” and its ridiculously romantic and earnest pleading and doubt. Fall into this lo-fi wonderland at methwax.bandcamp.com, and give ’im the business at facebook.com/methwax.

THE SLEEPY STRANGE: Although they mainly occupy a half-awake space deep inside a 20th Century dream of the future, The Music Tapes have done enough time in and for Athens that we can still consider the project, if not all its constituent players, as local. So it pleases me to let you know there’s a new EP available named The Orbiting Human Circus. It spans a mere four songs, but each is lovely in that particular Music Tapes way. Technically speaking, it’s not out of hand to say one of the largest influences on The Music Tapes has always been early 20th Century pop-vocal and orchestral music. Of particular note is main man Julian Koster‘s arrangement and performance of Irving Berlin’s “I’ve Got a Love.” Several hands played a part in the EP’s recording, including local Andy LeMaster, but all swam toward the common Music Tapes sound, which has always seemed like a radio transmission sent into space, bounced around between other planets for a few decades then picked up via a staticky car radio on an empty highway. Enjoy at themusictapes.bandcamp.com.

MASS-A-PEEL: Marching Banana Records just released the fourth installment of its ongoing compilation series, Bananagrams. The way these comps work is via artist collaboration: Musicians write and record together quickly, taking no band credit, although composers are credited. It has been about a year and a half since the last volume, and the label notes that the communal spirit essential to such a project is present in a much larger way this time around. Honestly, only participants would notice. The last one was good, and so is this one. Sure, that sounds a little off-the-cuff and predisposed, but by the same token, we’re talking about 24 songs composed and recorded in fits of immediacy over five months in 2016. There are a few gems, a few duds and an overall sense of creativity and energy. The nature of such a project lends itself to experimentation, and of course this is full of that, but for the most part everything falls within a broad underground-pop framework. Contributors include members of Mothers, Meth Wax, Jianna Justice, New Wives, Sea Ghost and many more. Choose your own adventure at marchingbanana.bandcamp.com.