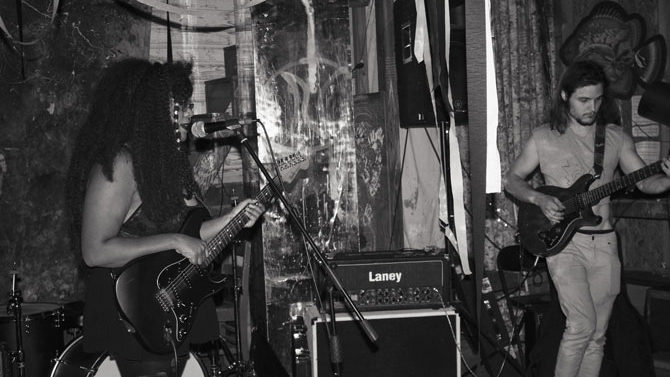 A FRAGILE SIGH: Harlot Party recently released its debut EP. (Check out our review here.) From the “first things first” department, it’s a solid contender for title of the year: I Want to Be Recalcitrant, I Am Just Exhausted. Vocalist and guitarist KyKy Renee Knight and guitarist Garrett Knighton (Juna) have recorded a shockingly good collection their first time out. Musically, the intertwined guitars—and only guitars—form a sort of dark pastoral landscape, and lyrically, this landscape is littered with remnants of exploded landmines. Everything here—including a voicemail titled “Preemptive Apologist” whose weight is revealed by the lyrical content of the rest of the record—drips with pain. And, true to the record’s title, the exhaustion from its particular grief is palpable. Significantly, there is no resolution and no catharsis. It’s just line after line of anguish so deeply held it feels like crass voyeurism even listening to it. Recalcitrant is an incredibly brave record that needed to be made—first, for the creators, and far distantly, for the rest of us. Listen intently over at harlotparty.bandcamp.com.

ADDRESS TO AN OFFICE: Bob Hay and the Jolly Beggars will host their 15th annual Robert Burns Concert Wednesday, Jan. 25 at the Office Lounge. The show begins at 8 p.m. and will feature, of course, the Beggars performing their tribute to Scottish poet Robert Burns (1759–1796) on his birthday. Burns is a pretty fascinating character, prolific in humor, observation and political commentary, and many of his musical compositions are well-known worldwide, even if folks have no idea who wrote them (ex: “Auld Lang Syne”). Finally, the Jolly Beggars remain in the top echelon of Athens folk traditionalists, so this is all win-win. For more information on Burns, see robertburns.org.

BANANA PUDDIN’: A handy label sampler of tunes was just released from Marching Banana Records. It’s titled Dancing, Exhumed in the Night, and it’s a fine showcase of the variety the label is known for. To be sure, everything here falls within the pop/rock road map, but it’s still a pretty broad map. Specific highlights come courtesy of Group Stretching, Weed Mario, Sea Ghost and Kissing Booth. Other artists featured include Futo, Civils and Fake Flowers. Over the past couple of years Marching Banana has grown into solid legitimacy, and should be included in the group of small but potent Athens labels (including HHBTM and Plus 100) that have sharp eyes and keen senses of taste. Find some fun over at marchingbanana.bandcamp.com.

HOMEGROWN: Tennessee artist Luke Roberts is opening this week’s Kurt Vile show at the 40 Watt Club, which doesn’t exactly qualify as “local music news,” but wait: There’s more. Roberts, a superbly intuitive songwriter whose music threatens to redefine both gentleness and toughness, recorded his album Sunlit Cross here in Athens with engineer Kyle Spence of Harvey Milk. Additional players on the album include Creston Spiers and Stephen Tanner, each of the aforementioned Harvey Milk, as well as John Neff, whose list of credentials is too long to publish anywhere. Roberts’ live band will feature Neil Golden (Golden Brown) on bass, piano, organ and backup vocals and Aaron Sims (Pride Parade, ex-Powder Room) on drums. Even though this isn’t exactly local music news, it’s hella close, which is why we’re talking about it. So there.