Get Strung Out with Dodd Ferrelle and Friends 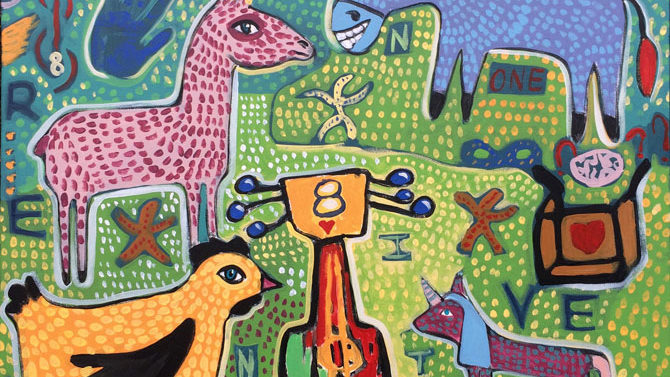 FILL ‘ER UP: Local musician and Winterville Mayor Dodd Ferrelle and friends are hosting their eighth annual Strung Out Like the Lights at Christmastime benefit for the Empty Stocking Fund, a charity that helps folks in need cover essentials such as rent, utility bills and various expenses. The show happens Friday, Dec. 9 at the Office Lounge, and music begins at 6 p.m. Artists playing, in order of appearance, are Scott and Pamela Baxendale, the Matt Joiner Band, Caroline Aiken and Shadow C.A.B., Will White and the Howlin’ South, Klezmer Local 42, Dodd Ferrelle and the WinterVillains, Dangfly!, Five Eight, MSRP and Reverend Tribble and the Deacons. As is traditional with this event, a Ferrelle family “backyard painting” will be raffled off. Chances to win are only $5, with all proceeds going to the aforementioned fund. For more information, see emptystockingfund.org.

PLEASE HELP: A Gofundme page has been set up for Bloodkin member Daniel Hutchens, who suffered a minor hemorrhagic stroke recently. A post by the band to its Facebook page recently revealed that Hutchens has suffered from high blood pressure for several years. “While this is obviously a serious medical condition, Danny is very lucky that it was a relatively minor event compared to what many people experience,” read the post. Hutchens has insisted that the annual Bloodkin and Friends holiday show scheduled for Dec. 10 at the Georgia Theatre “must go on!” And, thus, it shall. Fans and friends immediately started pouring in funds as soon as the donation page went up, and as we go headlong into the holiday season, every little bit will help that much more. See gofundme.com/daniel-hutchens-fund to donate and facebook.com/Bloodkin for updates.

I’LL TAKE ONE OF EVERYTHING: Last year, Nuçi’s Space held a stupendously popular fundraising event, and they’re doing it again. For only $5 per entry, you receive a chance to win the Nuçi Plus One Pass, which, true to its name, will get you and a friend free admission for all of 2017 to most shows at a ton of venues in Athens, Atlanta and other towns, plus select events. Participating venues are the 40 Watt Club, Georgia Theatre, Caledonia Lounge, The Foundry, Live Wire, Hendershot’s Coffee Bar and Normaltown Hall in Athens; Smith’s Olde Bar, The Loft, Center Stage, Vinyl, the Buckhead Theatre, Eddie’s Attic, the Variety Playhouse and Terminal West in Atlanta; Duluth’s Red Clay Music Foundry; and Macon’s Cox Capitol Theatre. Additionally, you’ll get into any show the Georgia Theatre promotes at other venues; a table for six for a single prearranged show at Chastain Park Ampitheatre; a pair of tickets to the Classic Center to catch Broadway show Once next February; and tickets to the North Georgia Folk Festival, Slingshot and Wildwood Revival. The deadline to enter is 11:59 a.m. Dec. 15. There are lots more details at nuci.org, so get over there quickly.

IF PROUST COULD DO IT, WHY NOT LARRY?: Longtime Athens musician Larry Acquaviva (The Honey Sliders) has written a five-volume (!) work detailing his life and times on the road as a roadie for Widespread Panic. The first volume is titled Nobody Cares Who You Are—The Life and Times of Aceman, a Widespread Panic Roadie: The Search for His Muse. In its 290 pages, Acquaviva covers his early life, including a rough childhood and a rootless adolescence. He doesn’t actually get to the part about being a roadie—which he was between 1987–1992—until volumes three and four. Athens publisher Deeds Publishing has signed on for the first volume, and the others are on a play-by-ear basis. The book comes out Dec. 7, when there’s a release show and book signing at Hendershot’s with a live performance from The Honey Sliders. On Dec. 10, Acquaviva hosts another book signing at Bar Georgia between 5–8 p.m in advance of the Bloodkin show at the Georgia Theatre. The book will be available to purchase from deedspublishing.com, Barnes & Noble and, after the turn of the year, Athens’ own Avid Bookshop.

IN MEMORIAM: A public memorial for the late Charlie Pruet will happen on the Georgia Theatre Rooftop Saturday, Dec. 10 at 4 p.m., also in advance of the aforementioned Bloodkin show. Pruet, who passed away in May, was well known in Athens’ jam and traditional music scenes and contributed multiple years as a member of Allgood, as well as sitting in with Widespread Panic several times. He was 52.