Dictator Finally Drops Buddha, and It Was Worth the Wait 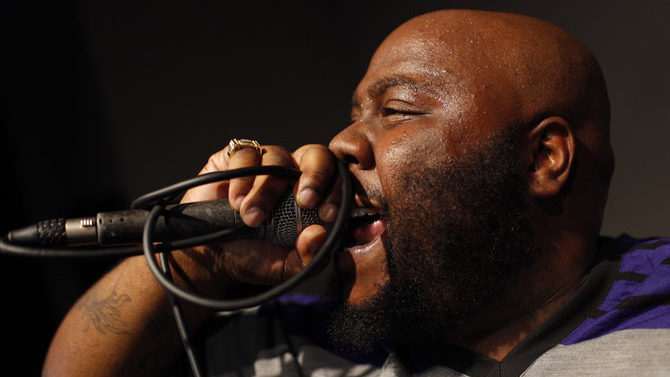 ALL EYEZ ON HE: Travis “Dictator” West released his new album Buddha last week. It’s been exactly a year since this was announced, and, honestly, it was worth the wait. 2015 was an exceedingly productive year for West, and he released the first single off this new album last November. This year has been a little quieter for him, but now it’s evident why. His biggest asset has always been his ability to hit hard lyrically with a flow that’s solidly mid-tempo, without ever deviating into rapid-fire rhymes or trendy flatlining. Indeed, although he deftly played court jester with his Shoulda Had a Verse mixtapes, Dictator is the opposite of a trend-chaser; he’s fully competent and confident in his style, with zero false flexing. Musically, the beats on Buddha range from elbows-up crowd pleasers like “Go” to R&B groovers like “Back in Da Day” to the super moody yet uplifting “Let You Win.” Grab it over at spinrilla.com/artists/DictatorClowningGang, and check out his back catalog over at soundcloud.com/dictatortharuler. Dictator will celebrate the release of the new album with a show at Iron Factory on Tuesday, Nov. 15. Longtime local hip hop fixture Ishues will share the bill, as will Yung’N Restless and Caufield.

STAY AWHILE: Jim Wilson (The TaxiCab Verses, Los Cantares) launched his November residency at Flicker Theatre & Bar last Saturday with an opening reception for his current visual art show there, “First Depressions.” The musical residency is a direct accompaniment to the visual art and the first thing of its kind, by virtue of its weeks-long engagement, that I’ve heard of in Athens. Saturday, Nov. 12 will feature Stink Ray (Los Cantares covering Link Wray), The Lanes, Lipperskip and Jim John Kiran (Wilson with John and Kiran Fernandes); Nov. 19 has Lassine Kouyate, Los Cantares and Davidson Wilson Rowe (Wilson, George Davidson and Joe Rowe); and the series closes out Nov. 26 with a closing reception at 8 p.m. followed by Pilgrim, Buffalo Hawk, The TaxiCab Verses and Stoni Taylor & Miles of Stone.

CATCH AND RELEASE: Athens/Atlanta punks Fishmonger have a new six-song record out named Fiesta Anti-Fascista. The best thing about it is it’s fairly musical within a late-’80s peace-punk kind of way, especially on tunes like “Deathmonger” and “Residente Tierra.” Lyrically, it’s kind of on the nose, with varying tunes addressing anti-Zionist/pro-Palestine themes, anti-police, anti-predatory behavior, etc. There’s nothing terribly compelling in the actual meat of the message, though, as the lyrics are largely a mishmash of pasted-together sentences with no real narrative or novel perspective. Give it a whirl at fishmonger.bandcamp.com.

PLAY DEEP: Athens experimental/improvisational landmark Killick Hinds has a new record out, joined by drummer Jamie DeRevere and craftsman extraordinaire bassist Michael Manring. The whole of it is very collaborative-sounding and not a case of session folks sitting in. Actually, that’s a nice hallmark of most of Killick’s work, and undoubtedly a contributing factor for his unstoppable release schedule. This one is titled Lifelike Boy Android, and takes its seat right in the middle of middle-brow 1980s aesthetics, from its Columbia Records red-spine artwork to sly (read: cheeky) nods toward both The Police’s “Roxanne” and Kansas’ “Dust in the Wind”—and probably more I missed—to the overall analog sci-fi feel of the thing. Like so much of Killick’s work, it features humor, both subtle and blatant, and a sense of spontaneity. Although I’ve felt pretty astute talking about his albums in the past, after a few listens this one is starting to speak more and more for itself. Check it at killick.bandcamp.com.

NEAR WILD HEAVEN: Athens psych-pop composer Jesse Kennedy has a new album out under his Wild Abandon moniker. We last heard from Kennedy via his record Lovedragon, which came out in August. This new six-track offering is titled Miss Mary Sunday, and if you could ride the dragon you can definitely get with this, too. Kennedy’s ear for melody is a thing of beauty, especially on the first two songs, “With You” and “A Part of Baby.” The latter does rhythm and blues over the top of a slightly sinister keyboard with expert execution. Everything kind of bottoms out on the instrumental “Blossoming Promises.” There’s no reason for it to be here, as it serves only as a vague placeholder on an already short record. The final track, “With Heaven on Our Side,” closes this chapter of Wild Abandon in a full thrust of echo, keyboard wash and deliberate rhythm. Honestly, I’ve no idea why Kennedy lists “freak folk” as a category for all this. It’s tons better than that tired straphanger of a title implies. Dig it at yrdarcyswildabandon.bandcamp.com.