Squalle Has Something to Say 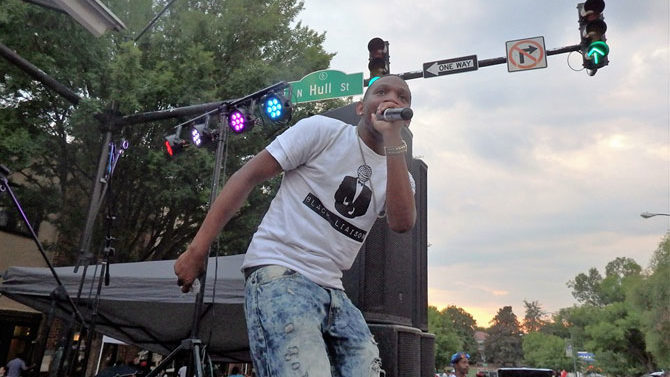 GOOD MORNING: With the release of his newest album, Black Picassoul, Athens artist Squalle has set himself up as a proper heir to 1990s-era backpack rap. Easily one of the most conscious and aware hip-hop albums out of Athens this year, the record is true to that original blend of lyrics that are clearly audible with beats that recall classic R&B with an array of jazz flavors, mostly pulling from fusion and easy listening. Squalle worked with several producers for this record, including Scarecrow Beats, Theo, Tunes, Paul Cabbin, Da Architekz Collective and Mykal Riley. Although the tradition of its style is generally one of positivity, self-improvement and respect, an awakened mind and sense of broad community are its pillars. So while it may be tempting to get comfy in the the lyrics of “Shine” (“Shine bright/ Live life/ Even when it’s dark all around me/ I gotta shine”), it’s important to not ignore what Squalle says on “Proclamation”: “America don’t care about our murdered friends/ America don’t care about our stolen dreams.” All things considered, it’s a really solid and welcome album that has arrived just on time. Check it out at dakidsqualle.bandcamp.com.

SAKI TO ME: Guitarist, vocalist and songwriter Lily Herne and her band spent most of September touring through New Mexico, California and Arizona before returning to Athens and releasing their new album, Lady Murasaki, a couple of weeks ago. The record is largely centered on a Japanese aesthetic, from its name to its cover art, but succeeds musically in this direction most successfully on opening track “Taka.” Critically, the record hits bright peaks (“Mistress of the Setting Sun,” “Sugar From the Palace”), and although the songs don’t generally have the strength to support their length—everything is between five and 13 minutes—there’s a passable amount of solid, bar-rock psychedelia to make it listenable. For her part, Herne’s vocals are best when she’s direct and forceful (“O Tomodache”), but she has a tendency to devolve into a childish, sing-songy, breathless area that is less charming than I’m sure is intended. For more information, see lilyherne.com.

FOUR FOR FIGHTING: It’s been a whole year since any new music came out from Athens rapper Louie Larceny, but he’s just released a fine new EP titled Abduction Sounds. Larceny stands apart from much of his Athens rap brethren in that he composes his own beats, as opposed to having others fill that gap. The sole exception on this new record is “White Magik,” for which old-school Athens talent Duddy Ken wrote what Larceny calls the “backbone” of the track and Larceny and engineer Joel Hatstat added embellishments. For the uninitiated, Louie Larceny has one of the most solid and hard-hitting vocal flows in town, and thematically, he says this record focuses on “love and fear.” I need to give this a few more spins to totally absorb, but with lines like “Know that I’m a beast”—the main hook from “Blood Hunger”—I’m inclined to believe him. Check it out at louielarceny.bandcamp.com. Larceny also has a feature appearance on the track “Lush Lands,” from spaced-out Atlanta group Stockham Syndrome’s new album The Hammond Progression, and you can listen over at stockhamsyndrome.bandcamp.com.

COMING BACK TO TOWN TO HELP US PARTY DOWN: Tickets are on sale now for the Drive-By Truckers‘ annual early-year run of 40 Watt shows. This homecoming series is dubbed the “HeAthens” shows, and will happen Feb. 16–18. The opening acts this time around, one for each date in order of appearance, are Thayer Sarrano; the Camp Amped Band and Trae Crowder (aka The Liberal Redneck); and The Hernies. For those traveling into town to catch these, the band has held a block of rooms at Hotel Indigo, and you can snag one for $149 per night if you use the code “DBT.” As is tradition, proceeds from these shows are donated to Nuçi’s Space. For tickets, see 40watt.com.

SNAP, CRACKLE: Indie-pop band Scooterbabe, which is starting to lean very much toward a mid-1990s emo-pop sound, will celebrate the release of its new album in a WUOG 90.5 FM-presented show at the Caledonia Lounge Friday, Nov. 4. Also on the bill are Dead Neighbors and Pansy. Most recently, Scooterbabe released the single “Sick Spine” from the new record, The Sorrow You’ve Been Toting Around. You can check it out at scooterbabe.bandcamp.com and become a fan in the proper 21st Century sense at facebook.com/scooterbabemusic.