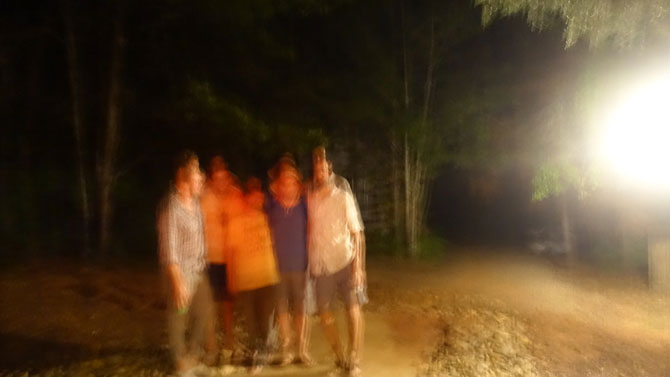 CONTINUING EDUCATION: The decade-old series of wildly variant artistic impulses and directions known as Future Ape Tapes just released its newest full-length, 1093. This release is possibly the most slippery thing the Apes have ever done while simultaneously being the most directly considered. There’s a full statement of purpose written for this record that characterizes the group as a “collective individual” and says that, on this album, this individual “creates a mirror through improvisation, attempting to sketch the outline… of the base impulses that reciprocate and re-create culture in our actions… We are bored with music. We have seen the other side. It is better than [sic] to create than to consume.” Musically, it lives up to its creed of slinky improvisation, gristly click-clack, echo-y loops and an overall sense of dread and devolution. Can’t wait to hear what happens next. Check it out at futureapetapes.bandcamp.com, and purchase a cassette version via Fall Break Records at store.fallbreakrecords.com.

PACK IT IN: The final songs have been released for the 2016 MOEKE Records Summer Singles series. Incredibly, this last batch comprises as much as the entire first half, with a full 11 tracks dropping at pretty much the same time. They come courtesy of Dream Culture, Chief Scout, Blanko, Loose Knives, Sea Ghost, Scooterbabe, Gumshoe, T.S. Woodward, Einschlagen, King Guru and Dope Scholarship. Although I mentioned the countrified Loose Knives track a couple of weeks ago, the rest is all brand new to me. The styles are all too varied to get into it here, but suffice it to say that all this stuff, plus the previously released tracks from nine other bands, are a damn fine document of the Athens music scene as it exists right now. You could wait to jump on this, but I don’t know why you would. Buy it now with name-your-price convenience over at moekerecords.bandcamp.com.

FLAT AS A PANCAKE: Athens musician and actor Aaron Strand released a massive, 23-track album last month titled Worthless Hipster Fuckface. As if it needed to be said, it’s more than a little on the long side, and 10 of its tracks are “skits”—some are kinda funny, but most are just bits of conversations from which I can’t discern a storyline—making this, structurally, kinda like a hip hop album. The tunes are acoustic, but fall more on the bluesy troubadour-ish side of things than the folksy, country side. In a twist of charm, Strand says this musical stew includes “skiffle,” too, which it absolutely does. I dunno—at first I was like, “I should check this out,” but after hearing it, I was like, “I didn’t need to do that.” I can’t tell if the entire thing is a put-on or not. Your mileage may vary, of course, so give it a test drive over at aaronstrand.bandcamp.com.

LONG WAY FROM HOME: Musician and poet Jacob Sunderlin moved to Athens from Oakland, CA, and it’s certainly our gain. He recently tipped me to his newest album, Death Ranch, which is composed of two pieces each running about 12-and-a-half minutes. It’s acoustic-guitar-based, underscored with drones and owes more than a passing debt to the latter-era works of the late John Fahey. This is meant as a total compliment, and I’m not in any way saying Sunderlin ganked his style. A cassette version is available from Castle Bravo Tapes at castlebravotapes.bandcamp.com. After doing some digging, I was pleased as punch to find a bunch of other music from Sunderlin at jacobsunderlin.bandcamp.com. I need some time to digest it all, but I’m really looking forward to the task.

PUZZLED PANTHER PARTY: Right before bassist Sascha Smith moved to Los Angeles in pursuit of his new career as a studio engineer, he made sure his band, Seahorse Bill, laid down a bunch of tracks at The Glow Recording Studio with engineer Jesse Mangum for an album named Elephant Party. In a way, it’s fitting that Smith landed where he did, because he, drummer Jesus Martinez and guitarist Lewis Gutierrez positively channel the spirit and sound of early L.A. punk. Think Germs, Redd Kross and Black Flag: fun as hell and totally well executed. Smith says the band is basically on super-hiatus right now, but who knows? Anyway, cut the shit and start the pit over at seahorsebill.bandcamp.com.