Shaved Christ Is Gone, But the Tunes Live On 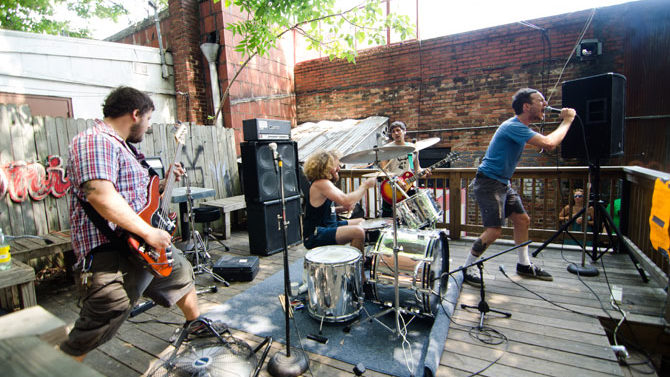 FINAL TESTAMENT: The last public statement from Athens hardcore heroes Shaved Christ was “This band is over… we still have songs that will come out.” That was January 2015. Now, a mere 20 months later, they are indeed out. This final, self-titled batch of six tunes was recorded in Atlanta by Ryan Bell and mastered by Joel Hatstat. As with the band’s other releases, these recordings are a great way to actually hear the group’s dynamism, sense of rhythm and aural homage to well-established hardcore touchstones like subtle use of echo, off-key feedback, etc. Most of this stuff was totally lost during Shaved Christ’s live shows, although those were always adept at showcasing the punishing forcefulness and in-yr-face-ness of the band that still holds the title for worst Athens band name ever. Dig it at shavedchrist.bandcamp.com.

SUMMER’S ALMOST GONE: After a seasonal break, Juan de Fuca will once again play at the Caledonia Lounge Friday, Sept. 9. Formerly the solo project of songwriter Jack Cherry, the group went full-band not long after Cherry released the magnificent Cavern Of last year. That record, a deeply moving collection of dream-pop and other meditations exploring the slightness of existence, still ranks very high, and here’s to the band being able to capture similar emotions. Word is the group has a new album in the bag, but it remains unmastered and there are no solid plans for it yet. Arrive early this night, because Juan de Fuca takes the stage before New York’s Mutual Benefit and Boston newsmakers Quilt, and shouldn’t be missed. Catch up with the tunes via juandefucamusic.bandcamp.com, and keep up with the band at facebook.com/juandefucamusicband.

RIGHT IN YR EAR: Sean McDonald, the man behind experimental label MMM Sound and ongoing project Heat Sureens, has put out several pieces of new music over the past several months. The most recent is the 16-minute Artbreaker EP. For this highly distorted psychic carnival, McDonald uses drums, vocals and various sonic effects to lull the listener in, then keep him pinned down. It’s not as ear-grabbing as the massive, two-sided Meet Quan Yin record he released almost a year ago, but it’s a pretty good stopgap measure. The same could be said for other recent McDonald tracks like “State of Mind” and “Early Grey Tobacco.” All of these are credited to McDonald proper, and not Heat Sureens. Check it out at soundcloud.com/mmm-sound, and grab more information at mmmsound.com.

THREE DAY WEEKEND: It’s no secret that Athens—Northeast Georgia’s biggest adult playground—makes a huge deal out of Halloween. It doesn’t even really matter when it happens, either, because people will just party on whichever weekend is closer and stretch the whole thing out for days. The folks at local restaurant Preserve are taking this spirit to the stratospheric level this year. Oct. 31 falls on a Monday, and they’re hosting the Halloween Hop, featuring a veritable smorgasbord of local and traveling talent at their space at 1660 W. Broad St. (the former Walter’s BBQ for you old-timers). Touring acts include Floor, Iron Chic, Big Eyes, Shellshag, Vacation, Sonic Avenues, Steve Adamyk Band, Off With Their Heads and Canadian Rifle, and the Athens bands playing are Feather Trade, Outersea, Area Men, Eureka California and Cancers. It runs from 1–10 p.m., so you can still go nuts elsewhere. Tickets are on sale now for $21 (including free entry to after-parties and ability to purchase beer for a buck) or $15 for regular admission. This is kind of a huge thing to happen, especially on a Monday, so respec’ to Preserve for doing this. See preserveathens.com/halloween-hop for more information.

CRINKLE, CRACKLE: Songwriter Jesse Kennedy released a new album from his ongoing creative outlet Wild Abandon a few weeks ago. It’s titled Lovedragon, and even though Kennedy tags it as “freak folk,” it’s so much better than anything that normally describes. Through these seven tracks, Kennedy explores psychedelic pop with hints of Prince (“Keeping the Light Alive”), dark synth propulsion (“Laura, Too Many Lemons”), rock-operatic semi-grandeur (“Soda Pop Soccer Moth”) and includes a wonderful, 10-minute long indie-orchestral piece named “Spidertank.” This last piece is constructed with, as best I can tell, chimes, cello, violin, guitar and maybe banjo. Honestly, I’ve no real idea, and don’t need to know. But I can tell you it absolutely rivals anything the Elephant 6 collective did during its 1990s heyday or its constituent members have done post-heyday. Let your ears be your guide over at yrdarcyswildabandon.bandcamp.com.