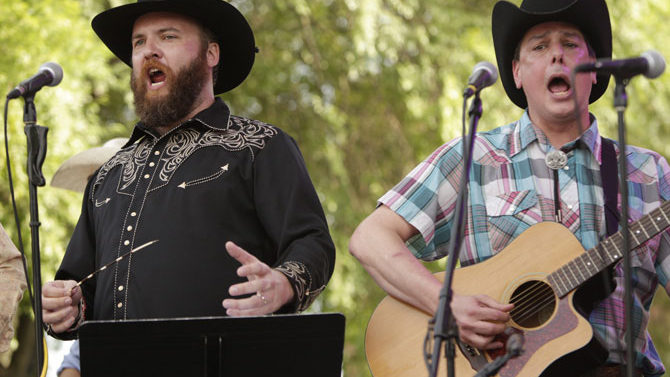 ROLLIN’: The Broad River Outpost will present its annual Broad River Watershed Association fundraiser Saturday, Aug. 6 at Camp Kiwanis (2613 Old Wildcat Bridge Road, Danielsville). While live music is always the cornerstone of this event, there are also some neat and thoughtful additions, such as a trivia contest on naturalist William Bartram and a plant identification contest. Gates open at 11 a.m. It’s $20 admission in advance per person ($25 at the gate), $10 for inner tube rental, $5 to camp overnight or $10 to camp in a cabin with air conditioning (hell, yeah!). The place has shower houses and new bathrooms, even, so the roughest part of this whole day is gonna be you. Live bands include the Athens Cowboy Choir, Nana Grizol, Harry Carey, Quiet Coyote, Caroline Aiken, Joe Willey and the Movin’ Men, Scott Low and the Southern Bouillon, Timi Conley and the Wonderland Rangers and Wanda. Late-night shows (for campers only) are by Off-Road Short Bus, Cult of Riggonia and Future Ape Tapes. For information and tickets, see orangetwin.com.

MOEKE, MON. GO!: While plenty of people, including myself, wish summer would just go ahead and leave, MOEKE Records still has a few things to do in its Summer Singles series. The newest three songs of the bunch are out now courtesy of Eddie Rascal, Monsoon and Future Lives. Each was, as is the series’ standard, recorded, mixed and mastered in a single four-hour block at The Glow Recording Studio. Eddie Rascal weighs in with “Born Less Bright,” a weird, punchy track that sounds like the guitars from Supergrass and the vocals from Suede—a bit rockist and a bit glammy. Monsoon’s “Gunnerru” is easily as good as anything on its full album and a solid continuation of its dressed-up, jittery aesthetic. The best of the three is “Brother of Mine” by Future Lives, which is really well composed and super melodic in a lush, ’70s pop-country style, all the way down to its fade-out background vocals. Catch ’em all at moekerecords.bandcamp.com.

WADE IN: A new seven song EP by And Others came out last week. It’s titled Dance! Seven Classic Pop Hits, and takes home the blue ribbon as the best-named Athens record this year. Musically, it’s bedroom-pop for those utterly sick of bedroom-pop. I was sold on this as soon as “Traded My Face In” started playing. Even though I’ve no idea what the lyrics are, its mood-evoking power is such that, really, that could have only been the point here. There’s lots of bass wobble, echo, and layered vocals played at a near snail’s pace. Another major highlight is “Forthedyingandthedead,” which starts as a claustrophobic freak-folk dirge, then, about two-and-a-half minutes in, segues into an uplifting feedback-y guitar solo before collapsing on itself. It’s a cool little record from an artist that already has several cool little records. Check it out at wa1cott.bandcamp.com.

HIT THAT PERFECT BEAT: Athens musician James Wilson released a new collection of songs from his project The TaxiCab Verses in late June. It’s an international collaborative project between TaxiCab Verses (a name inspired by the phrases covering the backs of taxis Wilson observed during his travels in Ghana) and Ghana’s Kofi Atentenben and the Warriors. The 10-track album is named Is What You Make It, and it’s aggressive and propulsive, even on tracks lesser musicians would let devolve into simple swing patterns (like the darkly jazz-tinged “Step By Step”). Overall, 22 musicians contributed to this between Athens and West Africa, and my only regret is that I didn’t write about it the moment it came out. It’s righteously excellent. Dig it at thetaxicabverses.bandcamp.com.

RUN THIS VOODOO DOWN: Eclectic jazz combo Lovesongs has a new album out named Wax/Wane that was recorded in January. The group features players Jeff Crouch, Stan Flanders, Jack Stirling, Andrew Robinson and Jeff Rieter. This seven-track record is self described as “Bitches Brew filtered through a grindcore filter,” which is only about half right. I mean that as a compliment, too, because Bitches Brew is a masterpiece and, with rare exception, grindcore is totally idiotic. Although there’s definitely a sense of humor here, especially on the underwhelming final three tracks, the best material on Wax/Wane hits early and stays consistently good for almost a full half-hour. The first four tracks are expansive, loud, expressive and delightful. I hesitated to call Lovesongs a “jazz combo,” because that sounds dismissive and essentialist, but it still sounds better than “band.” Click around on this and see what toots your horn. For more information and music, see notlovesongs.bandcamp.com and facebook.com/notlovesongs.