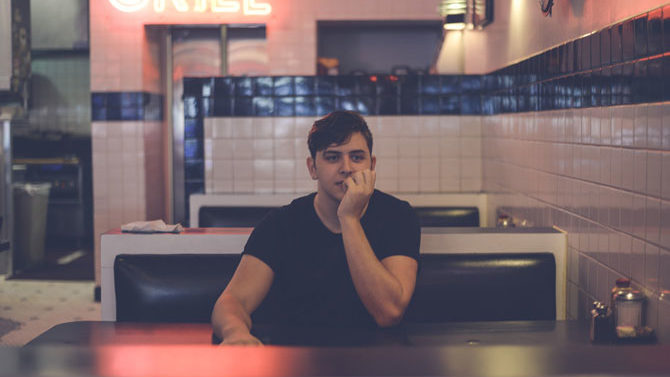 TWO OUT OF FIVE AIN’T BAD: Brother Mary is the solo musical project of Atlanta native and UGA student Ivano Milo, and the debut EP under that moniker was released a couple of weeks ago. It’s titled Immolate! and was written, recorded and mixed by Milo but mastered by Jesse Mangum over at The Glow Recording Studio. It took me a few solid listens to get into the meat ’n’ bones of it. At first I bristled when Milo told me via email that his sound was reminiscent of Corbin/Spooky Black, because there’s just too much of that wannabe-weirdo, vaguely R&B-influenced Fruity Loops stuff going around these days. Thankfully, I found Brother Mary to be a bit darker and, if possible, a little moodier. At its best it has passing similarities to Canadian band Trust, Jeff Buckley-ish vocals and the downtrodden storytelling of the second Radiohead LP. The main problem is there’s not enough material on this five-track EP to birth a recognizable personality. The first three tracks don’t really do anything for me, but the final two, “Kintsugi” and “Silhouettes”—especially the simple guitar wail in the middle of the latter—are signs of good things to come. Check it out at brothermarymusic.com.

PLEASE HELP: Four years ago, Athens musician Jenny Woodward (Like Totally!) was bitten by a tick. Soon after, she began to experience pain, fatigue and other symptoms. It took four years and many doctors to finally diagnose her properly with Lyme disease and babesiosis (another parasite-based blood infection spread by ticks), and because of the lag in diagnosis time, several other chronic illnesses had cropped up in the wake. In addition to severe economic and personal loss caused by these ailments, Woodward has the added burden of suffering from diseases a lot of folks, including myself, don’t completely understand. To this end, although most of her days are spent resting and attempting to heal, she has become outspoken about Lyme Disease and has been working as she can spreading awareness. A fundraising campaign is now underway to help her with her ever-mounting expenses, and you can donate any amount.

BILLS, BILLS, BILLS: While the full cast of Club Crawl performers remains to be announced, AthFest announced the lineup for its popular outdoor stages. The annual downtown festival, which runs this year from Friday, June 24–Sunday, June 26, has scattered some surprises throughout such that no day is more heavily loaded than the others. Drivin’ N’ Cryin’s Kevn Kinney kicks things off at 5:30 p.m. Friday and is followed by Jim White & Friends, the Athens Cowboy Choir and others before Family and Friends closes the night. Saturday begins with the Celtic music of Repent at Leisure outdoors at 12:30 p.m., and the full-day lineup includes Dodd Ferrelle, Grassland String Band, Reverend Conner Tribble & the Deacons, Randall Bramblett Band and more, plus headliners Arrested Development. Sunday is traditionally the most lightly attended day of AthFest, but this year it runs a gamut of styles, starting with String Theory at 12:30 p.m., then Son & Thief, Five Eight, Monsoon and others before Kishi Bashi closes out the night. For ongoing updates, see athfest.com.

BACK TO THE DRAWING BOARD: Songwriter Tyler Sloan has been concentrating more on his new band Makshula than his solo work lately. Last month the group released two songs, “Far Away” and “Locket Monster.” The first of those isn’t anything to write home about, with its sub-Blues Traveler hooks and overall blandness. The second, though, has a solid jangle-pop verse structure that isn’t bad but needs more, I dunno, oomph in its chorus and development overall. When it grows up, it’ll be on par with the earliest releases by The Connells. To be entirely fair, these are just demos and not fully realized releases, and I’d have never even mentioned them but for the band sending them to me. As a side note, Makshula insists on describing itself as an “alternative” rock band, which is both vague and inaccurate. No matter its merits, I can’t for the life of me figure out what this type of breezily inoffensive picnic music is supposed to be a compelling alternative to. Give it all a whirl at makshula.bandcamp.com.