Music Hates You is Back, and More Local Music News 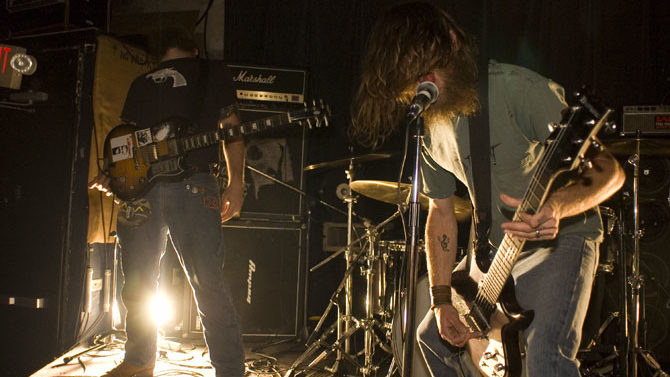 AND YOU TOO: Athens hardcore/metal band Music Hates You will play the Caledonia Lounge Saturday, Apr. 23. It’s the first time in seven years the lineup of Noah Ray, Zack Hembree, Forest Hetland and Erin Stagg have played together and the first time in a long time any configuration of Music Hates You has played live. This year marks the 10th anniversary of the group’s debut album, Send More Paramedics, which marked a new era in Athens loudness at the time. Joining the bill this night are Hot Breath and Beast Mode. So, why has this reunion of sorts taken so long? As people are wont to say, life gets in the way. Hembree says, “We have always been brothers. Forever family. Therein lays the reason we’ve decided to do this again. It’s mainly just an excuse for all of us to get together in the same space. Like a holiday with your favorite people you never get to see.” That’s good enough for me! For more information, see facebook.com/MusicHatesYou.

BID AWAY: AthFest is auctioning a two-tone green Gretsch 6118 Anniversary guitar signed by Drive-By Truckers. This particular guitar was built in 1999 but never sold. It features F-holes, a hollow body and chrome-plated hardware. The opening bid is $2,400, but you can buy it immediately for $4,000. Unless a buyer moves to purchase it immediately, the auction will run until noon on June 26. AthFest will ship this anywhere in the world, so don’t worry about that. The auction is hosted at biddingowl.com. Gretsch, through its Gretsch Foundation, has donated guitars for AthFest to auction each year since 2008, and these auctions have brought AthFest $31,000 in total sales dollars. Not bad, y’all!

LYRICIST LOUNGE: Lingua Franca and the crew behind Space Dungeon will present a second volume of Hot Corner Hip Hop at The World Famous Thursday, Apr. 14 at 9:30 p.m. These events act as a showcase for performers and also a freestyle competition. Featured artists this time around are Roswell, Gas Gawdlee, Atlanta’s World Wide Wonders, Son1, Louie Larceny, Y.O.D. and Space Dungeon. For more information, see facebook.com/liiinguafranca and facebook.com/spacedungeon.

STEADY IS AS STEADY DOES: Composer Ryan Rudder has been steadily releasing new music all season under his Echo Constant moniker. To wit, a full six-song EP named Hue came out a few months ago, and he’s released five additional tracks since then. The latest is named “Young/Old,” and while it’s fairly consistent with his overall kind of space-y hip hop, it’s a crisper production with super-clear vocals. Some of Rudder’s music would be better without vocals because of its airy, open vibe. Sometimes lyrics and vocals seem to restrict things a bit, even when his deadpan delivery adds essential entertainment value. Either way, it’s nice to see him continue to release stuff under the radar on such a regular basis. Keep up via facebook.com/echoconstant and dig the tracks at soundcloud.com/echoconstant-1.

KEEP QUIET: The continuously self-challenging WesdaRuler (aka Wesley Johnson)—who’s also a member of the aforementioned Space Dungeon—just released a new EP titled Slow Jams. True to its title, these nine tracks are unhurried, deliberate and have all the vibes of late-night composition sessions. Especially compelling is Wes’ use of deep-throb echo-y beats on “Love Sounds,” which isn’t something he’s really explored before. All in all, a decent set of instrumental tunes best experienced as they were produced: alone and late at night with no one around to bother you. Dig ‘em at wesdaruler.bandcamp.com.

GET IN THE VAN: Volume dealers The Powder Room take the show on the road this month with a short string of dates through North Carolina. They’ll play Asheville, Charlotte, Chapel Hill and Wilmington from April 20–23. Joining them on this run is Southern gothic band Wailin’ Storms, who owe more than a passing glance toward both The Gun Club and The Birthday Party. The Powder Room has a new album in the can, but that won’t be released until July or August, so hold your applause for now. Keep up with everything at facebook.com/powderroomga and sing along at thepowderroom.bandcamp.com.