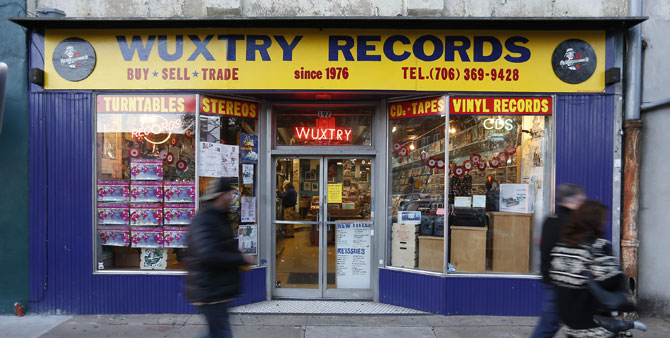 LORDY LORDY: Happy birthday wishes and congratulations go out to Athens’ Wuxtry Records, which celebrates 40 years of business this week. The number of local musicians and other personalities who have found employment and enjoyment within its walls—including myself for a whole seven years—is the stuff of legend, and it’s difficult to imagine an Athens without Wuxtry’s presence. For those not familiar with the ins and outs of the retail record industry, it’s difficult to overstate the two enormous sea changes that have happened since Wuxtry started in 1976: first, the advent of the compact disc, which instantaneously made the existing stock of most record shops obsolete overnight, and second, the bits and bytes of the digital music takeover that has threatened retail for at least the past 16 years. I personally salute a stalwart establishment such as Wuxtry for nimbly staying its course and keeping our town flush and fresh with new releases and rarities no matter the weather. Hats off, y’all! Wuxtry will celebrate with a party and concert at Little Kings Shuffle Club on Thursday, Mar. 24. See that week’s Flagpole for details.

TWO FOR FLINCHING: The Rodney Kings keep upping the volume and speed on their particular brand of garage-punk, and their new two-song single is the latest evidence of such. Titled Friday Night With… The Rodney Kings, the whole thing is over in four minutes, but that’s OK. The A-side, “Black Out,” is the circle-pit rave up of the two, whereas “I’m Watching You” is a more doom-y, dark-hued two-and-a-half minutes of angry paranoia. The band is prepping a video for the second track as we speak and plans to release that sometime next month. Watch this space for developments. Stream the new EP over at therodneykings.bandcamp.com.

TUNES AND TUNES: Songwriter Andrew Gorham just released his new full-length album, East Campus Expressed, which he describes as both a “love and hate letter written to the Classic City.” Gorham, who moved to Athens a couple of years ago, plays everything—piano, drums, keyboards—on these songs, which he recorded at various studios around town. Functionally, this works more like a demo than a comprehensive album, mainly because it’s incredibly difficult to discern any type of clear narrative, other than some vague sense of frustration underscored by a more developed sense of longing. But those emotions are mainly due to the piano arrangements, which are quite lovely and occasionally achingly tender (see “Impervious,” “Downtowner” and “Victorian Ease”). I’m not over the moon for the tracks that don’t feature his piano, because that’s the most distinct voice on here—more so than Gorham’s singing voice, which I think I’d have appreciated more if I had the lyrics in front of me. Gorham has a gift for arrangements, and “It’s Just Bad Timing…” is probably the best example of this. Overall, the album’s not a bad way to introduce oneself to the world, although even at a mere 10 songs, with most of those running near the one-minute mark, it can sometimes still feel a little long. Check it out at andrewgorham.bandcamp.com.

THREE ON A THURSDAY: Multi-genre talent Marty Winkler will host another night of Georgia Women of Song at The Foundry on Thursday, Mar. 10. Joining her this night are Georgia treasure Caroline Aiken, as well as Athens upstart and soon-to-be Nashville resident Mamie Davis. The first set from the three is an in-the-round thing where they’ll share harmonies and talk about the songs and the stories behind them. The second set has the trio joined by Michael Lesousky (Grassland String Band). Advance tickets are $8, and it’s $10 at the door. See thefoundryathens.com for tickets and more information.

(NOT) A GOD AWFUL SMALL AFFAIR: Athens will continue to pay loving tribute to the late David Bowie Saturday, Mar. 5 at the 40 Watt Club. This time, donations are encouraged for the Cancer Foundation of Northeast Georgia. The full bill includes eight live acts as well as the usual spectacular visuals by Eye Gate Productions. Live performers are Laura Camacho (Athens Tango Project), Nicholas Mallis & the Borealis, Emileigh Ireland, Blunt Bangs, Still, Small Voice & the Joyful Noise, T. S. Woodward, Mother the Car and Casper & the Cookies. Bands will perform on the main stage and side stage, and there’s gonna be an intermission to boot. The show begins at 9 p.m. and advance tickets are available at 40watt.com.