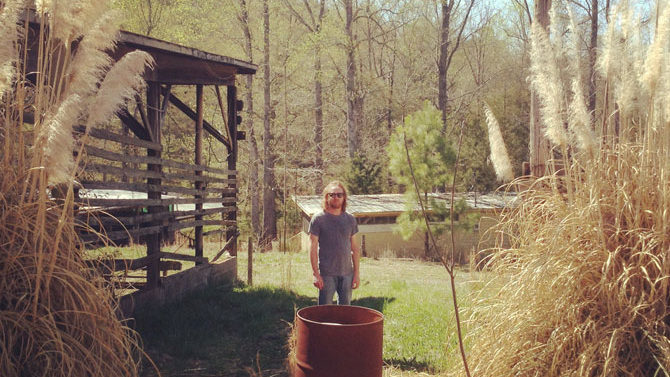 THE DIFFERENCE A DAY MAKES: Late last month Matt Stoessel (T. Hardy Morris & the Hardknocks, Cracker) released the debut EP from his psychedelic Americana outfit Buffalo Hawk. It’s titled Dream Living and was recorded in a single day almost two years ago with engineer Zeke Sayer at his Gypsy Farm Studio. It was mixed and mastered last year at Chase Park Transduction by Drew Vandenberg and Neal Warner, respectively. The full band includes Jim Wilson, Paul McHugh and Brantley Sean, each of whom has a musical resume as long as your arm. In all honesty, “psychedelic” may be too simplistic a reduction for this brand of heady, Crazy Horse-inspired guitar rock. I mean, it’s expressive and cinematic, but it sounds more like an imagined soundtrack to the final scene of 1969’s Easy Rider—when (SPOILER ALERT) Peter Fonda and Dennis Hopper are murdered by yokels—than that film’s trippy love scenes. It’s not brutal, but it is pretty dark. The gently lilting piano riff and fully resolved acoustic guitar melody of the title track, along with its genuinely beautiful and hopeful lyrics, provide a welcome reprieve that occurs right in the record’s middle. Check it out at buffalohawk.bandcamp.com. The band plays Hi-Lo Lounge on Feb. 28 as part of T. Hardy Morris’ monthlong series of Sunday shows.

OH, WHAT A NIGHT: Local promoter and DJ Will Cash has hosted some pretty cool shows over the past several months. If you were on the ball enough to attend them, you know what I mean. If you weren’t, or just want to trot down memory lane, he’s got you kinda covered. He recorded several of his productions, including vital performances by Athens’ own Vernon Thornsberry and New York’s Cole, and is hosting them online under the name Altimaxima Live. Stream away over at soundcloud.com/altimaxima-live.

WE’RE ALL MAD HERE: Local theater company Rose of Athens continues to work with local musicians and composers, the latest of whom is Marty Winkler. Fresh from a few weeks performing in New Zealand, Winkler reports that she’s totally occupied with her role in the company’s upcoming production of Alice In Wonderland, in which she is both musical narrator and in charge of conducting the cast as a vocal orchestra. Additionally, her compositions are being used as the theme for the show, and she’s employed words by author Lewis Carroll for “madrigal-type works” that will open and close each performance. The show opens Feb. 25 and runs through Mar. 5. For more information on Rose of Athens, tickets and how to become involved, see roseofathens.org.

FRIDAY NIGHT LIGHTS: Quickly rising Athens band Mothers will celebrate the release of its new album Friday, Mar. 4 at the Caledonia Lounge. When You Walk a Long Distance You are Tired is being released by New York label Grand Jury. Filling out the bill are Atlanta band Warehouse and the incredibly creative and compelling Art Contest. The Mothers album is available for pre-order at mothersathens.bandcamp.com, and you can keep up with their busy schedule over at facebook.com/nestingbehavior. The creative force behind Mothers, Kristine Leschper, keeps her Tumblr account regularly updated, and you can check it out at kristineleschper.tumblr.com. I heartily encourage you to do so, because for all the lip service given to the “arts and music” scene of Athens, Leschper is one of the only people I’ve ever encountered whose work in each area totally informs the other.

WE’RE ALL GOING MAD, PT. 2: Every now and again the formerly bitter Atlanta-Athens divide comes a little closer to being erased, and the latest artist to contribute to this phenomenon is Andrew Cleveland, aka Mad Ace. He’s just released an EP—his first in a year—titled Clever Girl. I’ve seen live shows by Mad Ace that were great and others that were less so, but this EP is pretty engaging, straddling a wide line that encompasses hip hop, electro-pop dance music and vocal pop. Cleveland shines best on straight-ahead emotive tracks like “That Kinda Day,” which has all the earmarks of sweet, evocative songwriting. Dig it all at madace.bandcamp.com and facebook.com/madacemusic.