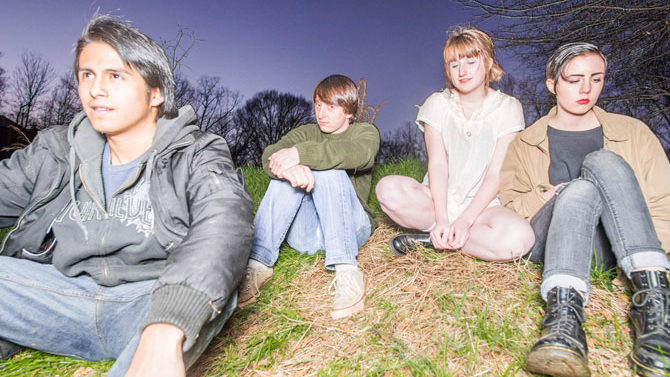 GIMME AN N: Late last month the barely year-old Nihilist Cheerleader released a new EP named Truth Or Dare. The local punk foursome—for whom the term is thankfully often more descriptive than prescriptive—is notable for its dynamic vocals, which are creatively tuneful, especially on tracks like “Date.” Lyrically, Nihilist Cheerleader is strong, with lines like “Maybe when I’m silent/ I’m saying something just as loud” (from “Retro Porn”) and “I wanna walk home by myself/ But the night’s already here” (from “Walk Home Alone”). Musically, the EP is a bit more polished and diverse than the group’s Parkour EP from last summer but still derives its essentials from four-chord, early-to-mid-‘90s West Coast indie punk. That said, they remind me of nobody as much as the old New York band A.P.P.L.E., whose name, because of the punctuation and the electronics juggernaut with a similar moniker, makes it nearly impossible to find. But give it a try and see if you don’t agree. First, check this new record out at nihilistcheerleader.bandcamp.com and be a fan at facebook.com/NihilistCheerleader.

GIVE US YOUR BUSINESS: OK, all you local folks dreaming of finally getting on stage, here’s your chance. Applications are now open for the next Athens Business Rocks benefit staged by Nuçi’s Space. The rules are pretty darn simple, and the deadline to register is Monday, Feb. 29. There are multiple ways for bands to earn points in the competition, and even though it’s gonna run ya 50 bucks to register, this includes 10 hours of rehearsal time at Nuçi’s. So it evens out. For the uninitiated, this is a fun thing that can include any local business. Just put together a band, learn three cover songs, participate in the various fundraising efforts listed online, and go! This year’s event happens May 14 at the 40 Watt Club. For more information and to register, see athensbusinessrocks.com.

EVERYTHING AT ONCE: Visual artist Gabrielle Bischoff just released a two-song single under the project name Garbage Barbie. The songs don’t exactly run fluidly into another but are very much two sides of the same coin, and when they’re enjoyed through the wonder of automatic streaming, they seem like one piece. “Charlatan At The Louvre” features a stark electronic click track, an acoustic guitar interruption and lyrics that read like postcard clues left in an empty room. “The Tonight Show” paints a portrait of utilitarian tasks (buying/eating food, watching television) but positions them as if they’re necessary last gasps if the day is to ever be closed. This is the sound of something collapsing. Further, it’s a logical extension from Bischoff’s previous musical projects, Bl0odletting and Fantasy Sports, the former being acoustic and ambient-focused (bl0odletting.tumblr.com) and the latter being a dark minimal synth project (soundcloud.com/fantasy-sports). I was tipped to this via a single-lined email that was just a link to the record. No introduction, no nothing. Thank God I was in a reasonable enough mood to explore and let it sink it. I’d have hated to miss it. Dig it at garbagebarbie.bandcamp.com.

TIME TO CHOOSE: Voting is now open for the 2016 Athens Hip Hop Awards. The ceremony this year will happen at the Morton Theatre on Sunday, Mar. 20. The host is Elite “tha Showstoppa” Ellison and, as always, there will be special guests, performances and more. There are 23 categories of awards and, because this event kinda goes out of its way to acknowledge the community from which many of its artists spring, includes restaurants, barber shops, stylists and more in addition to the musical categories. Advance tickets are on sale for $15. You can fill out your ballot and buy your tickets over at athenshiphopawards.com.

TOO MUCH MONKEY BUSINESS: Last November I gave pretty decent praise for Mercy Rule’s EP #1. Sure, I got the release date incorrect by a good 10 months, but I totally dug the thing. Its guitar-pop and singer-songwriter quality, amplified by composer Rob Smith recording everything himself, made for a neat little record. Smith has just released a “mixtape” named Gameday Goth of demos he’s recorded between 2012 and now. It runs almost a whole hour; in the record notes he says, “Many of these tunes are little more than demos/basic sketches and therefore didn’t feel worthy of their own individual track. So [they’re] compiled… onto [sic] one long-ass track.” Which is totally fine for him to do, but that doesn’t mean anyone needs to listen to it. I mean, I did, but all I was thinking was how I wished it was more fleshed out and complete, because I’d start to really like something and then it’d be over. So, I mean, it’s fine and all, but #1 is really where it’s at. At least until Smith does something else with these tracks. Head to mercyrules.bandcamp.com to see what all the excitement is about.