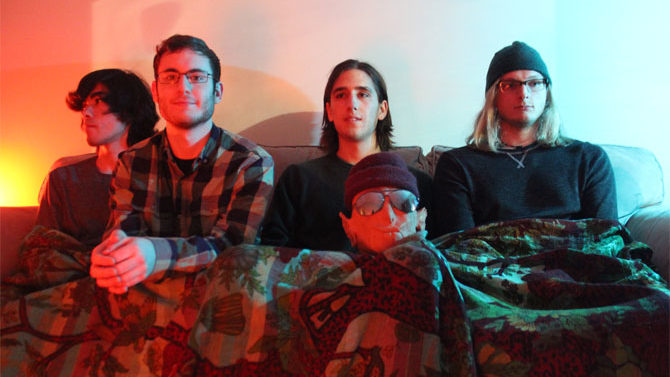 JUDGIN’ COVERS: A couple of weeks ago I caught a live set by Fat Neptune and, though the group’s moniker is certainly clever being that its animal namesake (the mollusk Neptunea beringiana) resembles an ear, I wasn’t expecting much. But my ears perked up once the band started playing its particular blend of indie psychedelia. The vocals were measured and slightly melancholy, the guitars were plucky and tuneful, and everything was imbued with a sense of creativity that completely shot to hell my prejudice, which had tagged them as likely a by-the-numbers jam band. The group’s debut EP was released in December, features five tracks and has a skull on the cover. After starting with the eminently musical “Cosmonaut” and “You’re in Love With Someone New,” it slides off a cliff into the staticky, nearly silent jazz montage of “Wash in the Garden.” For my money, that track rivals the best of any experimental artist in town. The instrumental “Snakelight/Sunrise” picks up the pace and has a totally solid drum solo toward the end, punctuated by an organ swell. The nine-minute “Fake Light Moon” closes it out and initially feels like a couple of songs jammed into one, but after a few listens it made more sense. For easy reference, this music exists at the point where Talking Heads, NRBQ, the Hampton Grease Band and the vocal tracks of every Ride album intersect. For your own reference, see facebook.com/FatNeptune and listen in at fatneptune.bandcamp.com.

HARD TO HANDLE: Remember last year when Packway Handle Band went on that totally improbable tour with Kid Rock and Foreigner? Well, the boys are back in town, and they’ll play The Foundry Saturday, Jan. 30. Also on the bill this night are New Orleans-based New West Records artists The Deslondes. Packway just finished recording a new album and is planning on debuting some material this night. For more info, see facebook.com/packwayhandle.

SPECIAL DELIVERY: Daniel Tanghal just released a new five-song EP under his own name titled Eloisa to Abelard. When asked why he chose to set loose this collection of songs under his given name as opposed to the more recognizable Meth Wax moniker, he reported, “I put it out [under] my name because the songs were more personal and sounded more folk/indie rather than garage rock.” Which is totally true, and, indeed, as it takes its inspiration from Alexander Pope’s 1717 poem of the same name, the record lends itself to this singular touch. The whole EP is actually kind of sad, and the lyrics are painfully romantic in the best sense of such. It’s less immediately catchy than the Meth Wax records, but still has plenty of guitars and melody, and is well worth a listen or more. Check it out at danieltanghal.bandcamp.com.

UP ALL NIGHT TO GET FOLKY: The Athens Folk Music and Dance Society is hosting an evening of music at the State Botanical Garden’s Day Chapel Thursday, Jan. 28. Dubbed “Raise the Folk,” it’ll feature performances by Art Rosenbaum with Russ and Phil Tanner, Caroline Aiken and Hope for Agoldensummer’s Claire Campbell. Doors open at 6:30 p.m. and music begins at 7:30 p.m. The event is all-ages and costs $15 at the door. The garden is located at 2450 South Milledge Ave. about a mile east of the Athens bypass. For more information and advance tickets, see athensfolk.org.

WORKING CLASS HEROES: The folks behind the Slingshot Festival, along with Creature Comforts Brewing, will host their next Industry Night Monday, Feb. 1 at the brewery. As always, these events are free for bar, restaurant and package sale employees who can prove it. For everyone else, there’s the normal charge for the brewery tour, drinks and a souvenir glass. Live music for this round is courtesy of the new Grafton Tanner (Programs) project Superpuppet, Moths and a DJ set by Electrophoria (Slingshot’s Kai Riedl with producer/engineer/composer Suny Lyons). These nights typically run from 5:30–8:30 p.m., so be on time.