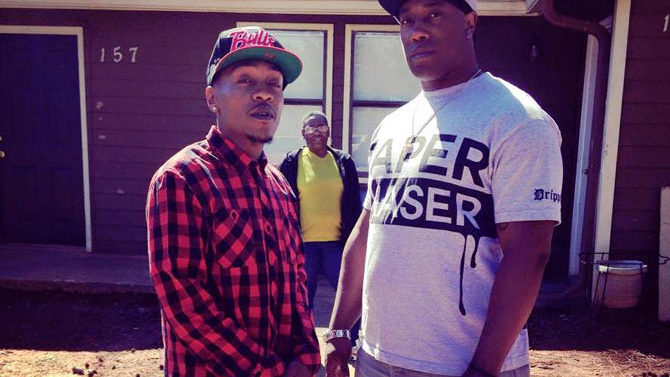 WORTH THE WAIT: Athens hip hop duo Team SS, composed of Justin “Loyal” Smith and Keefie “3ft” Johnson, just released its newest album, Sawce, and it’s a stone-cold Athens classic already. Fans of intelligent underground hip hop should love this, but don’t mistake it for any type of throwback or train-hop. Its 15 tracks are solidly produced with well-chosen samples, including a killer reworking of Joe Cocker’s “You Are So Beautiful” by producer Klubba Lang. Other beats on the record were done by Ace Infinity and UK producer Esskimo. Sawce runs a gamut of themes from good times to real-life troubles but never slips into cliché territory. It’s an incredibly strong, supremely thoughtful record, and the year since the duo’s last release (2015’s Kuntry Koolin’ mixtape) was worth the wait. The vocal interplay between Johnson and Smith is as good as anything out there, now or ever. Check it all out at teamsawce.bandcamp.com.

NOW PLAYING: Generally speaking, I hear so much music I could easily fill two lifetimes with it and, as such, don’t regret missing out on something I don’t catch as soon as it’s out. But I sure do wish someone had turned me on to Holding the Big Chickens Now by Athens’ Mamie Davis sooner. A lot of folks are going to cut her breaks because she’s only 17 years old and a high-school senior. But Davis doesn’t really need any breaks. Although the record retains a decided rawness, the only time it falls into “demo” category is when there are consciously off-key elements, like those on “Locusts” and “Transition Song.” Otherwise, this showcase of beautifully composed and refreshingly honest songs mine the traditions of folk, blues, some ‘90s-era acoustic stuff and modern vocal masters wonderfully. She’s also performed the only cover of Leadbelly’s version of “Where Did You Sleep Last Night?” that has ever given me chills. The album is available on iTunes and every other digital marketplace and streamable on Spotify, and if you’ve got any questions you can ask her in person when she plays Hendershot’s Coffee Bar on Sunday, Jan. 24 with a new backing band.

SOON BE HOME: Drive-By Truckers return to the 40 Watt Club Feb. 11–13 for their annual three-show run in support of Nuçi’s Space. Act soon, because these shows will all sell out. Per tradition, the Truckers will invite the Nuçi’s Space Camp Amped Band, led this year by the aforementioned Mamie Davis, to open Thursday’s show. Monsoon, led by Camp Amped alumnus Sienna Chandler, will also join this bill. Friday will have Dave Marr and band open the show, as well as a short set from Will Johnson (Centro-matic) playing songs from his new album, Swan City Vampires. Saturday’s show has Five Eight as openers, and between them and the Truckers, this will likely be the most emotionally draining yet life-affirming night of the run. Tickets are available now at drivebytruckers.com, so hop to it.

STITCHED-N-HITCHED: HHBTM Records has finalized a deal whereby the label will re-release long-running, cheerfully tastemaking UK band The Wedding Present’s 2005 album, Take Fountain. This is the first instance of the record appearing on cassette tape anywhere, and the first U.S. domestic vinyl release for the record. Both versions are slated for release in late spring, and the label will release the newest album by The Wedding Present in 2017. For more info, see facebook.com/HHBTM and hhbtm.com.

MARCHING ON: Drew Kirby (Mothers, New Wives) just released the sophomore EP from his solo project, Civils. It’s titled Hothouse Flowers and meshes together a variety of styles; these recordings were done before the project’s debut, Young But Ugly, which came out last August. Whereas Kirby recorded the previous EP in a single day and, according to the album notes, composed most of it on the spot, Hothouse Flowers is more traditionally compositional, and the genre mixing is part of the project’s ideal. As such, it succeeds somewhat but can feel disjointed. The first two tracks are less than 40 seconds long and work well as noisy buildups to the echo-y cough-syrup twilight dream of “Arielle.” The transitional short piece “Perth Summer” doesn’t really abide transitioning, though, and the upbeat acoustic “What I Am” reminds me too much of all those acoustic punk shows in the 1990s where everyone smelled really bad. But then the song disintegrates into such musical slurry I wished the end had been extended by five minutes. “Passages” and “Cold Turkey” are interesting pieces of indie psychedelia that I was happy to repeat. I’m looking forward to what Kirby does next, but I know he’s got a super busy year happening, so it may be a good while until there’s more Civils music released. So, enjoy this now at marchingbanana.bandcamp.com.