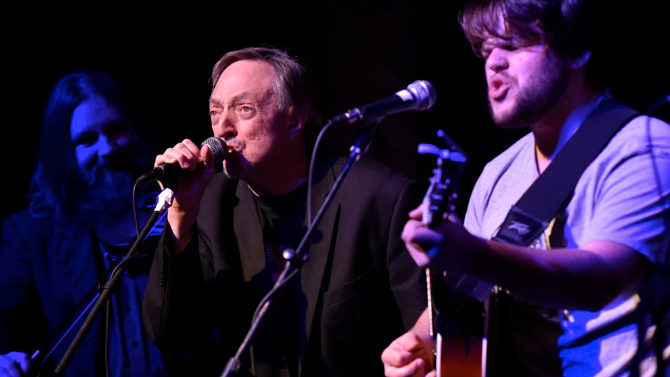 MY GRASS IS BLUE: Grassland String Band will release its new live album Thursday, Jan. 21 at The Foundry, where they’ll be opening for Nashville, TN band Humming House. The record was recorded at promoter Eddie Owen’s Duluth venue Red Clay Music Foundry and is titled Cold Blooded, Bleeding Heart. The group is known for its traditional bluegrass skills, but honestly, they really shine best when they open up the songbook. Slow mourners like “American Flag,” “Still In Love” and even a cover of Neil Young’s “Helpless” are displayed here to great effect. I’m less partial to obvious-sounding root stompers like “Boom, Boom,” as well as some of the good-time crowd pleasers that pepper this release. But the gems make it worthwhile overall. After this show, the band heads to Asheville, NC studio Echo Mountain to record a new EP planned for release in just a few months. For more information, see grasslandstringband.com.

EVERYBODY GET TOGETHER: AthFactor Entertainment and the Lyndon House Arts Center will present an annual Martin Luther King Jr. Day celebration and arts exposition Sunday, Jan. 17. Billed this year as Visions of MLK: Plant Positive Seeds, the organizers have been at it for several months coordinating artwork and performers that reflect and promote positivity in the community and a furtherance of King’s social goals. Performances of note include Versatyle tha Wildchyld, Cassie Chantel, The Talented Mr. Winfrey, Life the Griot, WiseXpressions Dance Team, S.H.E.D., Barnett Shoals Elementary Dance Team, Rashard Ars Stovall, Buddah, Profound and African Soul, among others. There will also be hands-on arts activities for kids, chess boards for play and information tables. It’s free, open to the public and begins at 2 p.m.

ROCK THE VOTE: The artist almost completely formerly known as Astroshaman is now releasing a steady string of tracks under the clearly superb moniker Bills Clinton. The change also signifies a change in style for one of Athens’ most prolific vaporwave artists. Everything Bills Clinton so far is straight low-slung hardcore hip hop. Given how prankster-y and willfully absurd the underground electronic scene can be, half of me thinks the good shaman (né Matt Lahey) could be trolling us all, but the other half of me thinks this is so damn good, who cares? Honestly, my money is simply on Lahey always working and this being a natural outgrowth of keeping the faith. Check his Astroshaman archives at astroshaman.bandcamp.com, and check the new stuff over at soundcloud.com/astro-shaman.

LAST PLACE RULES: Just before we signed off for our mid-winter nap, the newly established 30th Century Records, created by superstar producer Danger Mouse, a former Athenian, released its inaugural comp, 30th Century Records Compilation Volume 1. Mixed in among larger acts like the Black Keys-related The Arcs and Los Angeles duo Autolux are several smaller names (although many are well respected in their own regions). Among them is the formerly local, now Atlanta-based Jock Gang, which contributed its track “Tell Me About It.” Recorded by engineer Joel Hatstat, the song is deceptively simple, narcotically repetitive and absolutely perfect. I’m admittedly given to both hyperbole and hyper-criticism, sometimes paradoxically and other times in tandem. But I gave this whole comp the old college try, and dammit if Jock Gang’s wasn’t the only track I kept coming back to. The song is placed last on the record, and as such, makes the listener imagine the whole album as much better than it is. In reality, it’s this one song—with its simple bass line, guitar feedback and lyrics worthy of both early X and Sonic Youth—that makes the comp worth the time spent listening to it. It’s available via iTunes, Spotify and YouTube, so hop on it. Keep up via facebook.com/jockgangband.

WATCH THIS: There’s a benefit happening at Hendershot’s Coffee Bar Saturday, Jan. 16 for the Nancy Travis Childcare Project, which has many irons in the fire and focuses on childcare, early learning, support for parents with small children who seek to complete their GED and more. Playing this show are Purple House Ramblers, Don Chambers, Dave Marr and the Red Oak Southern String Band. Tickets are available at the door, and there is a $10 suggested donation. The event runs from 7:30–11 p.m. You can get more information at facebook.com/NancyTravisChildcare and learn even more at nancytravis.org.

I MEAN…: Christmas 2015 will live forever in the hearts of Sad Dads fans. The band planned it this way, going so far as to make a full half-hour movie named Sad Dads Holiday Special. I’ll bet anyone a dollar that I’m the only person to watch this all the way through. Be that as it may, the film features a loose narrative whereby Cameron Evers and Thomas Bauer sit in front of a fire waiting for the group’s other members to show up. But they all fall prey to mishap or mayhem, and nothing ever really happens. It’s all really ridiculous, and the sole comment posted on YouTube so far (“Why did y’all make this?”) says a lot. But it’s actually pretty funny if you pay attention, even though it drags in parts. Winston Barbe is probably the best “guest star,” as a TV repairman named Mr. Wang. Check it out on Homedrone, and as always, you can trawl the band’s musical efforts at saddadstheband.bandcamp.com.