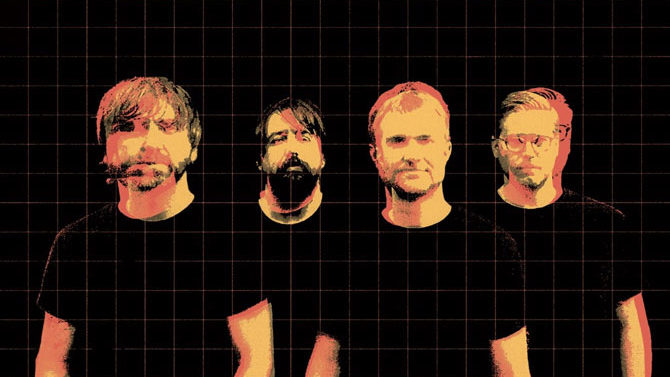 LUCKY NUMBER: Maserati is releasing its seventh full-length album, Rehumanizer, Oct. 30 via longtime label Temporary Residence. If the two tracks released so far are any indication, this album is a substantial artistic move for the group. Where all previous Maserati releases have, to varying degrees, been able to be loosely pigeonholed by terms like “post-rock,” this new material is just way beyond and really busts the whole concept of Maserati wide open. Press reaction to the first single, “Rehumanizer II” has quite correctly identified the non-debatable influence of A Flock of Seagulls, but there’s also a substantial amount of 1980–’82 U2 in it. Further, the second single, “End of Man,” draws from the well of Herbie Hancock, various early-‘80s funk groups and—if I’m less than gracious but still kinda honest—maybe a smidge of Styx. The entire album was recorded and mixed by drummer Mike Albanese, and while I personally find it quite refreshing, exciting, interminably cool and a great listen, it’s bound to cause some nose-wrinkling among longtime fans. Which is exactly what a creative group should be doing! So, kudos, boys. You nailed it. For more information, see temporaryresidence.com.

NEW YORK CITY ISN’T GOING ANYWHERE: You know that feeling in the fall where the air is crisp and electrified, and there’s a vague tension mixed with anticipation? Distill that into band form, and you’ve got the current state of Mothers. Fresh off the road for a couple of weeks, the band returns to the human highway to play a string of seven shows between Oct. 13–17 during the CMJ Music Marathon in NYC. The event known to almost everyone simply as “CMJ” dovetails nicely with the news that New York-based label Grand Jury will release the group’s new single this week. The song in question, “It Hurts Until it Doesn’t” is a bit poppier than most of the band’s previous music, but of course “pop” is a relative term here. Follow along via facebook.com/grandjurymusic and facebook.com/nestingbehavior.

WHAT? NO HAIRSHIRT?: Have you been wondering what those colorful, almost neon stripes busting out from the Internet were these past couple of weeks? Well, punky, it’s the newly relaunched R.E.M. website. It’s seriously much cleaner-looking, more easily navigable and an all-around better experience than the dark, kinda gloomy site they had before. And, yes, I know there’s a “dark, gloomy” R.E.M. joke to be made, but I’m not gonna make it. What I am gonna do, though, is give a hat tip to whoever made the decision to offer reproductions of popular older styles of the band’s T-shirts on the site, including the very popular “postcard” design circa Life’s Rich Pageant and the college freshman uniform of 1985, aka the “bicycle/parrot” shirt. Now y’all don’t have to steal your dad’s! Or, honestly, mine. Even though the band broke up a few years ago, its members are still awfully busy. Especially guitarist Peter Buck. Keep up with it all over at remhq.com.

LIVADITIS LA VIDA LOCA: Cellist Alec Livaditis has an album coming out in early 2016 on the Kye label. Titled Clear and Cloud, it’s culled largely from live shows (including his popular duo sets with John Fernandes) as well as some studio work completed at 1093 Boulevard. The record was mastered by Jason Lescalleet (Glistening Examples, et al) at his Glistening Labs. The Kye label is founded by longtime experimental music composer, author and visual artist Graham Lambkin (The Shadow Ring), and if ever there were a pretty perfect place for Livaditis to land, this is probably it. For slightly more information, see kyerecords.blogspot.com.

SATURDAY NIGHT’S ALRIGHT: The Slingshot Festival will present a coolly selected bill at the Caledonia Lounge Saturday, Oct. 24 featuring smooth electro-pop artist Brothertiger from Brooklyn, NY, as well as new music from Grafton Tanner (Scooterbabe, Programs) under the moniker Superpuppet. Rounding the night out is Slingshot director Kai Riedl distilling the music and style of his group Electrophoria into a DJ set consisting of, and influenced by, “everything from field recordings from Java, Indonesia to low-toned abstract synths, and everything in between.” This marks the live debut for Tanner’s new project, and the tracks he shared with me were nearly split in half between a sense of clean, clear, comfortable listening and glitchy nervousness marked by clipped boom-bap beats. Looking forward to hearing more and seeing how this plays out live.