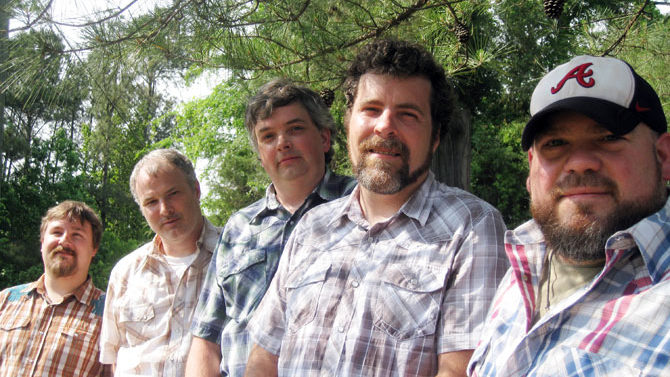 DRAGGIN’ THE LINE: It’s been awhile since we’ve heard any substantial news from The Welfare Liners, but I guess that’s because they’ve been busy recording their new album, Just Stars for Light. It’s coming out courtesy of Ghostmeat Records on Sept. 15, and the band will play a release show at Hendershot’s Coffee Bar on Friday, Sept. 18. Although the bluegrass group incorporated some non-traditional instruments this time around—drums, for example—you’d be hard-pressed to worry about it. Clocking in at 10 songs, the album felt a little long to me while listening to it, but your mileage may vary. Historians will note the cover art featuring the old Barnett Shoals Dam, which, after its construction in 1910, not only provided area residents with electricity, but also figured prominently in a few scenes from the shot-in-Athens 1975 exploitation movie Poor Pretty Eddie (aka Black Vengeance, aka Redneck County, aka Heartbreak Motel), which starred Shelly Winters and Slim Pickens. At any rate, if you want to check out the new album, head to thewelfareliners.com and stream away.

DAWG DAYS: Squeezing itself out just in time to squeak underneath the closing doors of summer is the new, self-titled album by Jo RB Jones. As the band notes, its name is pronounced like “Joe Arby Jones,” but that’s not what’s important here. This is a pretty solid release of sweet indie-pop with some thoughtful flourishes strewn throughout (e.g., the keyboard/organ parts on “To Tongues,” a lesson in tastefulness and classy production values). And while I could do without the nearly minute-long moan of an intro on “Tew” and the sluggish slowness of “Spinnin’” in its entirety, the other five songs are top notch: breezy, full of personality and clever without being stupid. The Loud Baby Sounds label has cassette versions for five bucks, too. Dig it at jorbjones.bandcamp.com and facebook.com/jorbjones, and purchase via loudbabysounds.com.

HOME AGAIN: Athens songwriter Adam Klein is gearing up to release his sixth full-length album, Archer’s Arrow. He’ll be playing a release show Thursday, Sept. 17 at the Caledonia Lounge with his band The Wild Fires. In a press release, Klein says, “I’m releasing albums at a fairly slow clip. I’m sitting on four collections of songs which are basically written and unrecorded.” That may be true, but considering the scope of his records and the fact that he spent a few years in the Peace Corps, leading to subsequent international recordings, I think he’s right on track. In other news, budding actor Klein plays the role of “Band Leader” and will be heard singing in the to-be-released television pilot Zelda, the central character of which is Zelda Fitzgerald, wife of F. Scott, played by Christina Ricci. Going back to the new album, it’s a real return to Klein’s comfortable style of folky Americana. He’s an incredibly thoughtful lyricist, and his material often takes a few listens to reveal itself fully. Check out all his goings on at adam-klein.com.

WHILE WE WERE SLEEPING: Mothers landed briefly back in Athens a couple of weeks back, but is now back on the road for most of September. Although the first single from the band’s upcoming debut, “No Crying in Baseball,” has already been blasted across the known universe, a sweet new number snuck out last week. “Mother and Wife” was recorded on a Tascam four-track cassette recorder, which is, of course, the same way Bruce Springsteen recorded his stark masterpiece Nebraska. It’s also a nice reminder of what a powerful performer and songwriter Kristine Leschper is without a full band behind her. Mothers remains a stunningly fresh item on the current Athens scene; very-old-timers will recognize traces of both Athens’ Hetch Hetchy and New York’s Hugo Largo in its sound. I assure you, though, any similarity is completely coincidental. Fan up over at facebook.com/nestingbehavior and listen in at soundcloud.com/mothers-1.

BEAT YOUR HEART OUT: It’s going to be a real treat when Osaka-born, U.S.-based experimental percussionist Tatsuya Nakatani plays Athens on Monday, Sept. 21 at the Athens Institute for Contemporary Art (ATHICA). Nakatani’s variety of instrumentation can include “drums, gongs, cymbals, singing bowls, metal objects, bells and various sticks and bows,” and it is noted that “his music is based in improvised/experimental music, jazz, free jazz, rock and noise, yet retains the sense of space and beauty found in traditional Japanese folk music.” I apologize for using two quotes so closely together, but they said it better than I could. Also on the bill are Athens’ own artist-in-permanent-residence Killick and performer/composer/improvisational cellist Alec Livaditis. To learn more about Nakatani, see hhproduction.org.