Remember When Black Lips Almost Blew Up the 40 Watt? 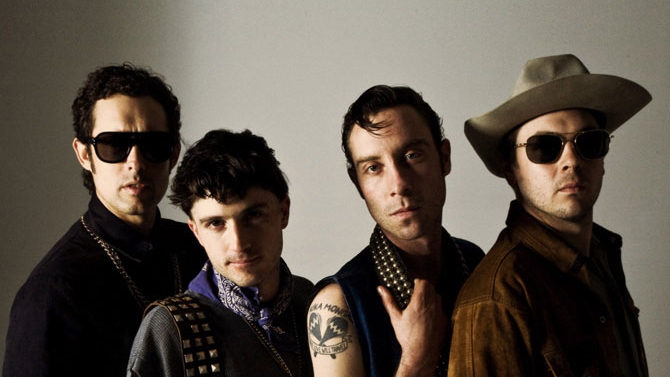 LIPSCO INFERNO: Sometimes it seems like it was only yesterday that Atlanta’s Black Lips were making their October 2002 Athens debut at the 40 Watt Club; other times, it feels like a million years ago. That first performance, a now-legendary shitshow of shambolic madness complete with amateur pyrotechnics (aka firecrackers, lighter fluid and a Zippo) and a backstage admonishment preserved forever on the opening track of the band’s first LP, was actually really fun. Not that I bothered having any fun at the time, though, as my high horse was well-saddled, and I called the band out for their bad behavior in this very column. But as the songwriter says, I’m younger than that now. The point of all these words is to tip you to the fact that the now-world-famous Black Lips will return to the 40 Watt Thursday, Sept. 17 as part of a Red Bull Sound Select performance curated by the Tight Bros Network; Atlanta’s Baby Baby and Athens’ own Muuy Biien will open. Tickets are free, but you have to RSVP to grab ’em.

HOUSE OF OAK, WALL OF STONE: By the time you read this, Tedo Stone and his band will have just filled up their van with gasoline to hit the road for about two weeks of tour dates, with Athens band Oak House in tow. They’ll mostly hit cities on the East Coast before coming close to home with a show at Atlanta’s Mammal Gallery on Sept. 12 to celebrate Stone’s record release. The name of that album again is Marshes, and it comes out Sept. 18. It was recorded and produced by Drew Vandenberg at Chase Park Transduction, and it’s pretty swell. You may pre-order it at tedostone.bandcamp.com. Keep up with each band via facebook.com/tedostone and facebook.com/oakhouseband. Your call. It’s casual.

CALIFORNIA LOVE: I’d never heard of Ruben Junior before this week. He was born and reared in East Athens, but now lives in Southern California. I don’t know much more, but I’ve been listening to his new track “Eastside,” brand new as of last week, and it’s got me choked up right in the throat. Even though it’s specifically about his life, its themes are pretty universal and can easily be transmuted to apply to anyone reading this. Ruben Junior alternately raps and sings R&B, and “Eastside” falls somewhere right in between those. I just know I’m digging it and wanted to tip y’all to it. Check it out at soundcloud.com/ru_ben_jr.

AND IN THIS CORNER…: As promised, Travis “Dictator” West has released his second collection of original lyrics over popular beats. The mixtape is called Shoulda Had Verse Too, and it features Dictator’s unique takes on tracks from Rich Homie Quan, Fetty Wap, K Camp, Young Dro and more. Download or stream over at datpiff.com/profile/DICTATOR87.

DON’T BLINK: The coolest thing about the new video from The Electric Nature is that it was made using “tachyons [and] analog glitch video synthesizers and VHS equipment.” Now, I have no idea where a body even goes to purchase tachyons—a particle that is reputedly able to travel faster than the speed of light—but dammit if Michael Potter and the crew at Broken Machine Films didn’t figure it out. The track is “Alienation 1,” from The Electric Nature’s new six-track album Alienation. Joking aside, the record—another exciting entry in the Athens/Atlanta experimental noise scene—is a monster of a thing. Its release marks the arrival of the first headphone record of the fall, and composer Potter should feel really good about it. Most impressive is the list of collaborators, which numbers no less than 12. Do you have any idea how hard it is to wrangle 12 people and make them work towards a sole cause? I mean, I guess Jesus did it, but still. We live in exciting times. You may stimulate yourself further by heading to illuminatedpaths.bandcamp.com. Illuminated Paths has also made a limited number of cassettes available, and Atlanta label Mission Trips is planning a CD release in the next few months. Dive into the entire world of The Electric Nature at theelectricnature.bandcamp.com, and take a visit to facebook.com/TheElectricNature while you’re at it.