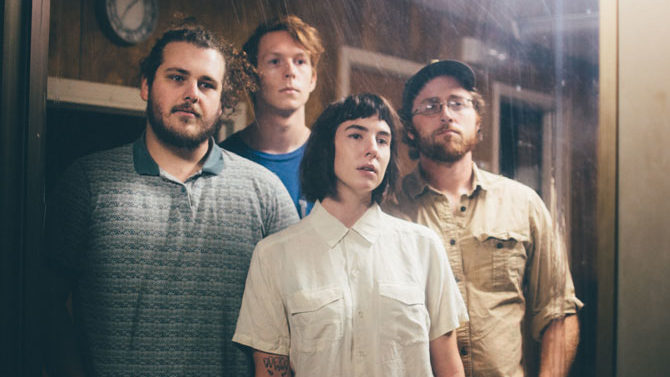 IS IT NOT OBVIOUS?: It’s no secret that the shooting star of Mothers, and its creator Kristine Leschper, is approaching rocket speed. The band will hit the road this month both on its own and in support of of Montreal. Save for an appearance this week at Creature Comforts and an Atlanta show at Smith’s Olde Bar on Sept. 16, the group will be far away until the beginning of October. In addition, Mothers recently released “No Crying in Baseball,” the first single from its upcoming Drew Vandenberg-produced debut album, due next year. Although I bristled at Mothers’ expansion into full-band territory at first, having been an enthusiastic supporter of Leschper as a solo artist, I must say that while initial steps in this direction seemed unfocused and superfluous, the group is now doing grand things within this configuration. I worried that a band arrangement would dilute the all-of-a-piece aesthetic I’d been so drawn to when it was solely Leschper’s visual art and music; it hasn’t. Audiences are responding in a big way, and I couldn’t be happier for all concerned. You can keep up with all things Mothers via facebook.com/nestingbehavior and kristineleschper.tumblr.com.

DOUBLE DIPPIN’: At the risk of repeating some news, let me turn your ears again toward Fall Break Records. I’ve written about this cool little label before, but they’ve just coordinated releases of a couple of previously available items that deserve another glance, especially from all the new eyes in town. First, Richard Gumby‘s Hardrive is an eminently listenable thing where each successive song is my new favorite. Perfect indie psychedelia in the best sense of each term. Next, Dead Neighbors‘ self-titled noise-jangle album is probably the most suited for its cassette release, both with regard to its shockingly accurate, utterly unintentional 1980s musical touchstones and rock production. You can search for each of these separately, but you’ll save time by heading to fallbreakrecords.bandcamp.com or fallbreakrecords.com.

TRY AND STOP HIM: Songwriter Ethan Mullenax released one of the best singles of the year last month (“Rainy Day Affections”), and now he’s just released a new EP, I Try and Stop Myself. It’s difficult to characterize this new music as a stylistic change for Mullenax, because he never strictly adheres to any style. It is fair to say, though, that these songs feel more off-the-cuff. I can’t speak for the compositions, which might have been lying around his head for a long time, but Mullenax does concede that the idea behind the EP was to rid himself of his internal editor. Anyone remember when Radiohead released music you actually wanted to hear? If so, you’ll dig opening track “Unpleasant.” My tastes fall more toward “Stagger,” which reveals what Miles Davis’ Sketches of Spain would have sounded like if it was directed by Herbie Hancock instead of Gil Evans. I also predict that by the time you hear “Manifesto,” you’ll have a new favorite song. And, yeah, I hate continually comparing things, but when a song instantly makes me imagine Will Hart (Circulatory System) collaborating with Richard Thompson, I just can’t help it. Jump on this at ethanmullenax.bandcamp.com.

ARA RETURNS: This Friday, Saturday and Sunday, Art Rocks Athens will host a couple of very special things that are part and parcel of its mission to place art first and music second. Thus, I realize full well the irony of their inclusion in this music-centered column, but read further and it will make sense. On Friday, a pop-up photography gallery, dubbed “Art Rocks Photo & Film,” will appear at 1225 S. Milledge Ave. (next door to Waffle House) and feature an opening from 5:30–8:30 p.m. It is a photographic retrospective of the Athens scene from the 1970s–1985 and consists of several sub-themes from the very public to the very personal. The show is curated by well-known former Athenian Sandra-Lee Phipps and includes the work of James Herbert, Michael Stipe, Michael Lachowski, Jeremy Ayers, Dana Downs, the late Carol Levy, Curtis Knapp and many more. On Saturday, UGA’s Special Collections Libraries will host screenings of exceedingly rare films shot by several Athens luminaries, including Lachowski, Cindy Wilson, Betty Alice Fowler and more. Sample titles include Pylon NYC Trip (1980), Roof Party (1979) and B-52s at CBGB. There are also screenings happening Sunday afternoon at Ciné.

SMOOTH MOVES: On Sunday, Aug. 30, The Foundry will host a special edition of the Segar Jazz Affair, the monthly smooth-jazz showcase hosted by WXAG radio DJ Dwain Segar. This concert is billed as a celebration of the five-year anniversary of both Segar’s arrival in Athens and his radio show. Music will be provided by John Dunn & the Jazzman Band, who will play two sets, at 6 and 8 p.m. In addition, there will be live poetry from Life the Griot and artwork on display by Broderick Flanigan. [Gabe Vodicka]