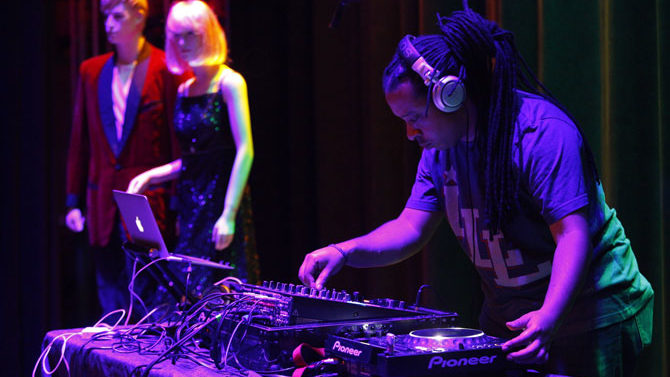 MÚSICA PARA LAS MASAS: The Georgia Museum of Art is gearing up for its next Museum Mix event, happening Thursday, Aug. 6. The event is free and open to the public. The concept is to have people visit the museum during the night—traditionally a time when people don’t do such things—to relax, enjoy some music and visit the exhibits. Featured musicians this Mix are DJ Yatusabes from Hialeah, FL and D:RC (aka Darcy Reenis) from Athens. The event is happening in conjunction with the exhibit El Taller de Gráfica Popular: Vida y Arte, which is a retrospective of the print collective, founded in Mexico in 1937 and largely concerned with the prospect of art as revolutionary device and communication conduit. For more information, see facebook.com/GeorgiaMuseumofArt or georgiamuseum.org.

TAKE A LITTLE TRIP: The city of Auburn—our neighbor 30 miles or so to the west—is hosting a talent show with real cash money prizes. It’s happening Saturday, Sept. 12, and participants will need to perform acoustically. The prizes are $500 (first place), $250 (second place) and $100 (third place). It’s simple to enter: All you need do is submit a CD or DVD to Andrew Simpson, Auburn’s planning and Main Street coordinator, at the Auburn City Hall or email him your info with a link to your YouTube or Facebook page. If you’re selected to perform, your set should be composed of about five songs with a length of four minutes each. Acceptable genres are blues/soul, Americana, bluegrass and pop/classic rock. All entrants need to be over 18. You can contact Simpson directly via mainstreet.permits@cityofauburn-ga.org or call 770-963-4002, ext. 206.

TALK OF THE TOWNIE: The Slingshot Festival has been busy promoting a new smartphone application developed by one of its core contributors, Suny Lyons. The app, available for iPhone and Android, is named Townie. It’s a local events application allowing easy navigation of live music shows and cultural happenings in Athens. I’ve been playing around with it for about a week, and its interface is seamless, the categories are cleanly organized, and it’s very easy to read. A lot of this same information is available if you bookmark flagpole.com/events on your phone, which I’ve done for a long time, and it works just fine, too.

GET ON UP: I never thought I’d be mentioning something called “Grown & Sexy Sundays” in this column, but seeing as how local indie rock activity has slowed to a virtual crawl, I figured, why not? Anyway, the debut of the event, presented by K & K Entertainment, will happen Sunday, Aug. 9 at The Foundry. For the uninitiated, the idea of “grown and sexy” events was established many years ago in the African American community to distinguish events meant for those whose ages, and presumably incomes, skewed higher and whose tastes were more refined than those who just wanted to mash all night to club bangers. To this end, each event has a dress code, and this one is no different: Organizers state explicitly that people should dress to impress and that no sportswear is allowed. The featured music this night is DJ Mellow Myers, who will spin “the best from Motown, Stax Records, Atlantic Records and more.” There’s also a 1970s dance contest, with the top prize being $100. So scrub up, get dressed, and have fun. For more information, see thefoundryathens.com.

HAVE YOU HEARD?: Local pop group Wanda has been on the lips of many folks lately, and even though they’ve only got one song available, it’s worth pointing you toward. They’ve been playing a lot of shows, and it just feels like this next year is gonna be theirs if they want it. Composed of Avery Draut, Evan Taylor, Grafton Tanner and Andy Mines, the band’s one track is named “Lipstick Lady.” It’s a punchy little tune about, I dunno, a lady doing different sorts of things, and it eventually kind of disintegrates into a hazy slowdown toward the end. Give it a listen at wandawanda.bandcamp.com, and follow along via this chunky monkey of a URL at facebook.com/wwaannddaa.