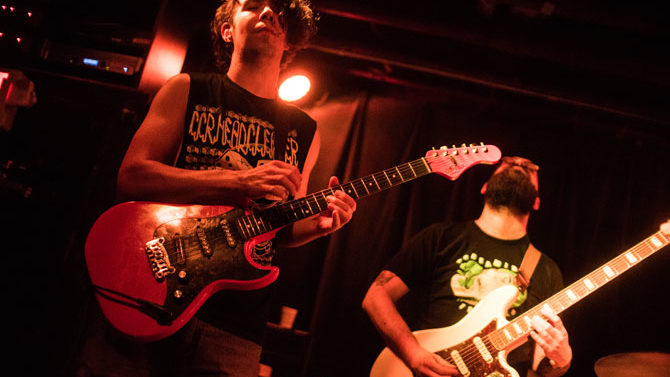 R.I.P.: Flagpole joins the community in mourning the loss of local musician Robert Newton “Newt” Carter, who passed away earlier this month. Known for his sound and production work as well as his spot on the Drive-By Truckers’ road crew, Carter was a central presence in Athens music over the years. The Truckers’ Patterson Hood eulogized Carter on Facebook, writing, “He cut a wide swath through this life he lived, and we are all the better for having known him.” A memorial for Carter is scheduled for 1 p.m. Sunday, Aug. 9 at Nuçi’s Space. In lieu of flowers, Carter’s family requests donations to Nuçi’s Space, “so that others may celebrate life through their music.” [Gabe Vodicka]

IN THROUGH THE OUT DOOR: There’s finally going to be a solidly organized event in Athens that celebrates, in organizers’ words, “street theater, circus and cabaret performers, burlesque and vaudeville, performance art and avant-garde dance and movement, stand-up comedy and improv, experimental art, film and music.” This event is the newly christened Classic City Fringe Festival. It’ll happen Oct. 22–25 and is founded by longtime performers Marty Cronk, Megan Dunn and Mux Blank. Performance applications are free to submit, and the deadline is Aug. 16. One of the things that’s hindered the performance underground for so long is that it, like many scenes, tends to operate via the assumption that its potential audience is composed of people already in the know. However, the lack of true galvanization and the exhausting attendant task of explaining itself to even seasoned fans has generally limited its exposure to a small crew. But the Fringe Festival already seems a million miles ahead of anything that came before, and there’s a renewed sense of enthusiasm about the whole thing that has my interest piqued. I encourage everyone to take a look at classiccityfringefestival.com and facebook.com/classiccityfringefestival. If you’ve got questions, drop a line to classiccityfringefest@gmail.com.

COMFORTS ZONE: The next Creature Comforts Industry Night, co-presented by the Slingshot Festival, will happen Monday, Aug. 3. The featured bands are Double Ferrari and the Halem Albright Band. As always, bring some proof you work in the entertainment/restaurant/beverage industry, and you’ll get in for free. If you’ve got no proof, it’ll run ya $12 for your beer glass, the factory tour and several ounces of Creature Comforts brew. The evening runs from 5:30–8:30 p.m. Questions? Hit up Katie Beauchamp via katie@ccbeerco.com.

A MAN OF HIS WORDS: Travis West, aka Dictator, continues to grind as hard as anyone in the Athens rap game ever has. In a lot of ways, he’s setting a new standard for work in the Classic City: He’s literally always at it. So it makes sense that he’s already making the follow-up to his most recent mixtape, Shoulda Had a Verse. Aptly titled Shoulda Had a Verse Too, the first single came out last week. “Flex Freestyle” is easily one of the catchiest straight-up party bangers Dictator has ever recorded. Looking forward to hearing the whole new collection. Dig it at soundcloud.com/dictatortharuler.

OUT OF THE BLUE: Athens-by-way-of-Virginia songwriter and musician Ethan Mullenax just released a new single, “Rainy Day Affections.” Full stop, this is one of the most shockingly beautiful compositions to come out of our town this year. Musically speaking, it’s very close to that early 1970s sound best realized by, say, Joni Mitchell and Neil Young. Fans will instantly recognize the slow-paced, Laurel Canyon-esque piano melody but will imagine it being played in the aftermath of a Wyoming dust storm. It’s desolate and tender in equal measure, and it deserves an audience. Mullenax, with whom I was unfamiliar until I stumbled upon this, has a lot of material available to hear over at soundcloud.com/ethan-mullenax, and this new song is available at ethanmullenax.bandcamp.com.

NOISE ANNOYS: The perpetually producing Killick released another two recordings this month. The first, a 21-minute solo meditation played on his H’arpeggione, is named Upper and Lower Panties in a Wad. The next is titled—I’m not kidding—tiny fuzzy cooler on my shoulder in Wisconsin (what has happened and a smatt’rin’ ‘caus’in’ Mr. Schroeder). Don’t ask me. I have no idea at all. But I can tell you it’s an aggressive, 14-track album, even when the music itself is relatively peaceful, featuring Killick and guitarist Tim Schroeder, and that it feels more off-the-cuff than Killick’s other recent releases. Give it some time. As always, spend the rest of the year over at killick.bandcamp.com.