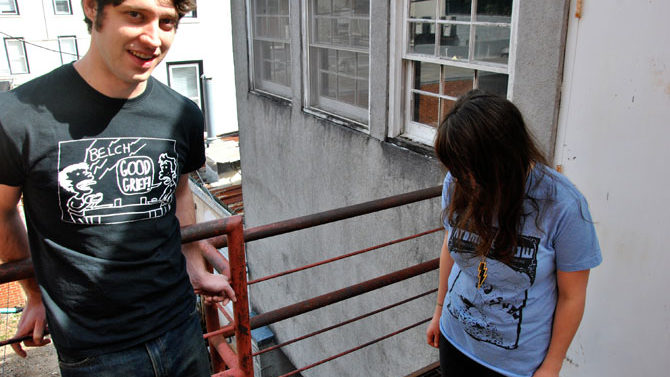 EC IN THE UK: Rock duo Eureka California will spend a hell of a lot of time overseas this summer. Beginning in late July, they’ll undertake a nine-date UK tour with long-running indie-pop heroes Bunnygrunt. This jog includes appearances at the enviable Indietracks Festival, as well as shows in London, Cardiff, Liverpool, Glasgow, Edinburgh and more. Afterward, they’ll spend a week in Leeds at Suburban Home Studio, which is run by MJ of Hookworms and counts Mazes, Traams, Eagulls, Joanna Gruesome and Cowtown among its alumni. Then, they’ll hit mainland Europe for two weeks of shows before spinning back around to the UK, pushing through another full week with Witching Waves and topping it all off with a set at the Edge of the Sea Festival in Brighton. Catch them locally—and before they lose their minds from pure exhaustion—during AthFest, and before that, at the Caledonia Lounge on June 15, when they appear with Atlanta’s Gold-Bears and Roanoke, VA’s Eternal Summers. Keep up to date at facebook.com/eurekacalifornia.

TWO FOR ONE: It should be no secret for regular readers of this column that Classic City hip hop is having one hell of a season. Specifically, the number of high-quality, thoughtful releases is at an all-time high. Nailing that point home this week is the newest collaborative single from 3ft (aka Keefie Johnson) and Loyal (aka Justin Smith), “Tell ‘Em Naw.” Reportedly available on nearly every imaginable digital service, it’s a low-slung club banger ripe for remixes. So, yeah, that’s a call to all DJs to give this one a shot. Not to say the original track isn’t everything it’s supposed to be, but I can hear this one getting some real love through other people’s visions, too.

BLOCK-ROCKIN’ BEATS: Travis “Dictator” West has made good on a recent promise with his new mixtape, Shoulda Had A Verse. The record features Dictator taking the beats from relatively popular tracks and throwing his rhymes on top—hence the album’s title. The whole thing functions as a cool standalone record, but also works as a great call on the carpet to Future, Young Thug, Migos, Ne-Yo and more. Easily one of the most consistent and no-bullshit artists on the Athens scene, Dictator rarely, if ever, disappoints. Grab it at datpiff.com/profile/DICTATOR87.

NIGHT LIGHTS: Although the hip hop conference that was supposed to happen a couple weeks back courtesy of UGA Live wound up not really happening in any serious sense, as all the panels and films were canceled at the last minute and it was, at any rate, woefully under-attended, there was still a silver lining: I was handed a copy of the brand new mixtape by Tru Thought (aka Aaron Thomas), The Intermission. Though it manages to hold interest through all its 14 tracks, one thing that’s particularly compelling is Thomas’ mid-tempo vocal flow, which sounds way more influenced by Southwestern rap than the Dirty South proper. All things considered, Thomas and his DJ, Band Boy Macho, have made a good record for cruising late nights. You can grab it at datpiff.com/profile/tru_thought706.

ONE MORE TIME: If you missed songwriter Adam Klein at Flicker Theatre & Bar last month, you can catch him at Hendershot’s Coffee Bar on Friday, June 12. On that date, he’ll appear with  Grace & Tony (Nashville, TN) and Hannah Aldridge (Muscle Shoals, AL). There’s a chance Klein will have copies of his newest, yet-to-be-released record, Archer’s Arrow, available, though its official release isn’t until this fall. The tireless Klein continues to tour multiple times a year in dedicated stretches, and also short bursts of weekend dates, so locals should attend whenever possible. For more info, see adam-klein.com.