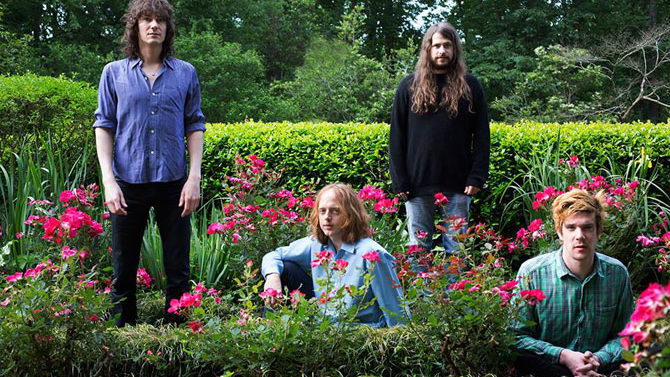 RISE AGAIN: Longtime Athens musician Hank Sullivant moved back to town a couple of years ago and hasn’t really stopped working at all. When he hasn’t been busy with psych-rock heavyweights MGMT, he’s been recording a new album with his own band, Kuroma. It’s slated to be released Apr. 7 by Seattle label Votiv Music and is a fine piece of learned pop to be added to the Athens canon. Titled Kuromarama, the album was produced by Ben Goldwasser (MGMT) and, while it was mainly recorded in New York, additional production was handled by Athens’ Kyle Spence (Harvey Milk). Kuroma will play the main stage at AthFest this year just before of Montreal, but in the more immediate future, they’ll head out for shows with bands like Tame Impala, Ex Hex and Tennis, as well as several headlining shows of their own. For more information, see facebook.com/RealKuroma.

NO WAY. WAY!: From the now completely substantiated rumor department is news that longtime Athens band Japancakes has recorded a new album and is readying it for release. Although the band is best known for its driving instrumental jams, member Brant Rackley reports that the new tracks are more upbeat and different than what fans are used to. While this may be true compositionally, it’s difficult to imagine the group—still composed of Rackley, Eric Berg, Heather McIntosh, John Neff and Nick Bielli—turning into a straight-up rock band. Interestingly, though, the band’s new album features vocalist Carrie Clough (formerly of the Bay Area’s Call & Response) on most of the new tracks. Engineer Andy Baker handled the bulk of the recording and mixing, and Rackley notes that the vocals and cello parts were recorded in Los Angeles. Japancakes’ most recent releases were the twin 2007 recordings of a full-album cover of My Bloody Valentine’s Loveless and the all-original LP Giving Machines.

TIME GOES BY LIKE HURRICANES: Avid Bookshop will host author Michael Buffalo Smith on Friday, Apr. 10 from 6:30–7:30 p.m. in celebration of his book Rebel Yell: An Oral History of Southern Rock, published late last year by Mercer University Press. The event is free and open to the public. Smith was the founder of the Southern rock journal Gritz, and while the book is largely focused on what he calls the “big four” (the Allman Brothers Band, Lynyrd Skynyrd, the Marshall Tucker Band and the Charlie Daniels Band), it includes input from other authentic sources to flesh out the full story. Smith previously published his autobiography, Prisoner of Southern Rock: A Memoir. More information can be found at michaelbuffalo.net.

PURE POP FOR NOW PEOPLE: Jay Gonzalez (Drive-By Truckers) is releasing his new EP this week. It’s titled The Bitter Suite, and based on the one song available for preview, it seems to be another fine entry into Gonzalez’s already packed catalog of classic-pop compositions, which in this instance means equal doses XTC, Beach Boys and Burt Bacharach. The five-track release features Gonzalez (vocals, guitars, bass, ukelele, keyboards and percussion) joined by guitarist and bassist Chris Grehan and percussionist Joe Rowe. Check it out via inflatablemusic.bandcamp.com.

NOW FEATURING TED FROM ACCOUNTING!: Registration is now closed for this year’s Athens Business Rocks competition, although for the life of me, I can’t remember hearing that it ever opened. But some folks sure did, and that’s why bands formed by employees of Honey’s Salon, City Salon & Spa, Ground Control and Athens-Clarke Emergency Specialists have already been announced. As always, Athens Business Rocks is administered by and held for the benefit of Nuçi’s Space. The event, which brings together employees from all types of businesses, takes place May 15 and 16 at the 40 Watt Club. More information can be found at athensbusinessrocks.com.

LOVE ME TWO TIMES: The Darnell Boys will play a double dose of old-time for you this week with twin shows that are basically mere hours apart. First up, they’ll be playing the Georgia Theatre on Tuesday, Apr. 7, as part of a show celebrating photographer Jason Thrasher’s Athens Potluck series of photographs, which will be on display at the Theatre the rest of the year. Next up is the album release show for the Boys’ new album, Workman’s Will, at the Caledonia Lounge on Friday, Apr. 10. They’ll share the bill with Cicada Rhythm and Blair Crimmins & the Hookers.