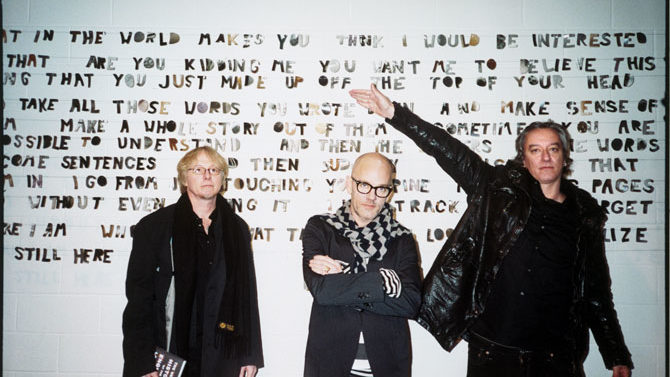 The Screen, the Blinding Light: Of all the footage compiled in the upcoming REMTV box set, the six-DVD collection of broadcasts featuring R.E.M. appearing on several of the many channels now owned by MTV, the most special one is their Oct. 30, 1983 appearance on Nickelodeon‘s teen talk show, “Livewire.” Why? Because, 1: It was hosted by Georgia native and UGA graduate Fred Newman; 2: It was a down-to-earth yet sophisticated show that didn’t talk down to its audience; and 3: Because I can finally show people a nice, clean copy of this and say, “Look! I told you this happened!” Fans lucky enough to have grabbed tickets can celebrate its release with a screening of the documentary R.E.M. by MTV Sunday, Nov. 23 at Ciné. Hosted by athensmusic.net, this screening is in the spirit of all the pre-release parties that website has hosted for R.E.M. over the years. To this end, it’s also a benefit for Community Connection of Northeast Georgia and Family Connection–Communities In Schools of Athens. There are three screenings (3:30 p.m., 6 p.m. and 8:30 p.m.), though the latter two are sold out, the first screening will feature a raffle of R.E.M. stuff and limited-edition event T-shirts will be sold.

Brick After Brick: Related to the above item is the fundraising effort by Nuçi’s Space to fully restore the steeple of the demolished St. Mary’s Episcopal Church, colloquially known as the R.E.M. church, because the band played its first gig there in 1980. The original church was built by and for mill workers in the Potterytown area near the river and dedicated on Apr. 9, 1871. The steeple has been stabilized but needs $60,600 to be fully restored. The total goal of the effort is $250,000, which includes the cost of restoration, Camp Amped scholarships, subsidized counseling and psychiatric appointments, discounted eye appointments and other services Nuçi’s Space provides. All funds raised above this goal are to be the seed money for a reserve fund earmarked specifically for Nuçi’s Space services; none are allotted for administrative costs. The campaign runs until Dec. 13. For more, click here.

Stock Up for Winter: Multi-instrumentalist/experimentalist Killick managed to sneak out two huge collections of music this past month. The first, This Is What I Was Doing Between 3:15pm And 7:15pm EST On Friday, October 10th, 2014, was recorded during exactly that time at The Glow Recording Studio. The session was arranged specifically to accommodate 18 recordings with his new guitar, specially built by luthier Rick Toone. Nicknamed “The Walrus,” this instrument’s neck can be quickly swapped out, and the record features nine tracks with a fretted neck and nine with a fretless neck. The second release is titled Pan Scraper/Nylon Hong Kong, and features Killick playing his well-known h’arpeggione, as well as electric guitar, the aforementioned Walrus, his “Big Red” harp guitar and acoustic guitar. Take your time and dig each slowly, ideally with headphones, at killick.bandcamp.com. Killick plays live Friday, Nov. 14 at Flicker with his combo Crazy Hoarse, who share the bill this night with Gumshoe and The Taxicab Verses.

Welcome Home: Although she only lived here a handful of years, songwriter Cara Beth Satalino made her mark early and often with her band Witches and with her solo work. Operating under the name Outer Spaces, the now-Baltimore, MD-based Satalino will play Athens on Thursday, Nov. 13 at Hi-Lo Lounge. She’s got an excellent new EP out now named Garbage Beach to stream via outerspaces.bandcamp.com, and will share the bill this night with El Hollín, Deep State and Moths. So, yeah, the whole thing is pretty darn unimpeachable.