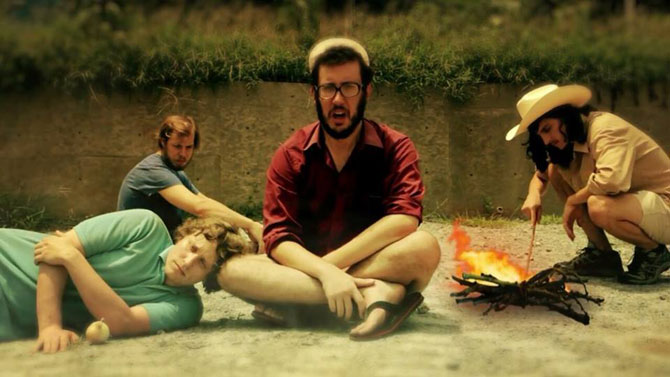 C’mon, Dad!: Athens band Sad Dads has launched a fundraising campaign for its upcoming debut full-length, I’m Doing OK. It’s to be recorded at the venerable Gypsy Farm, mastered at Chase Park Transduction and then released via a short run of cassettes and CDs. The goal is a measly $500, which I’m thinking won’t be anywhere close to what they actually need for this. Even so, it’s gonna be difficult to surpass their creativity in terms of donor benefits. The lowest levels get you music and a shirt, but $25 forces bassist Michael Jefts to eat a raw onion; $50 gets you a free show at a place of your choosing; $100 gives you the right to cancel any existing Sad Dads performance for any reason; give $150, and you can drive member Cameron Evers to any location you like and leave him there for 24 hours (yikes!); $200 will force singer Thomas Bauer to get any tattoo you want on his bottom; and for $300, you get to control the entire band. You can kick people out, add members at will, break them up entirely, whatever. More bands should try this and see what happens. Take a damn risk once in a while, people. Visit kickstarter.com/projects/athensdocumentary/save-our-dads and see what you can do. Or go yell at them on facebook.com/saddadstheband.

More bands should try this and see what happens. Take a damn risk once in a while, people.

Welcome, Freshmen: You probably know certain segments of the Athens music scene thrive on nothing more than air and absurdity. Now let’s assume you want to get out of your boring old dorm where, let’s face it, everyone else is probably already having a party with people from their own high school. Well, punky, here’s your chance to be all you can be. Head to Hendershot’s Coffee Bar Saturday, Aug. 30 and catch the 8-Track Gorilla. After a long period of retirement, Kenny Aguar is back in his monkey suit and ready to karaoke the hell out of some 8-track classics. No, I’m not kidding: It’s Aguar in a gorilla suit holding a guitar and singing over the top of classic rock jams while they play on old 8-track tapes. Whatever, bro; it’s art. And for those of you already years in the know, congrats on being olds! Also on the bill this night are Jay Gonzalez (Drive-By Truckers) playing his piano-based pop songs and Jacob Morris (Moths) playing more weepy stuff. Neither one of them is weird in the traditional sense. But that Gorilla sure is. Get down.

Give ‘Em the Boot: Longtime songwriter and guitarist Caroline Aiken will conduct a guitar boot camp at Athens Technical College Sept. 8–11 and 15–18. All eight days are included in the fee of $150, and each class is one-and-a-half hours long. Class size is limited to 10, so jump on this if you’re interested. There willl be both individual and group instruction, and you’ll have your hands on your guitar the entire time. This course is appropriate for beginning to intermediate guitarists. For more information and to reserve your space, drop a line to Brenda Moody via Bmoody@athenstech.edu.

Public Parking: Promoter Mo Lutz, the brains and brawn behind the listening room at The Hut (aka Pizza Hut on Baxter Street), has joined forces with Memorial Park facility supervisor John McKinney to start the Memorial Park Inaugural Concert Series. The idea is to present a series of shows for the citizens of our town at times, and in a setting, that the average family or individual can enjoy. Further goals of the series are to help local nonprofit organizations, reignite the community spirit of the Athens music scene and renew the idea that good music is for everyone. The series will happen at Memorial Park on select Sundays at 3 p.m. and Fridays at 7 p.m., and will use both indoor and outdoor facilities. Each show will benefit a different nonprofit that addresses “the needs of abused and at-risk children, women and families in need.” The first installment is scheduled for late September and will feature Ike Stubblefield, Caroline Aiken and Natalie Gelman. To get the full scoop, drop a line to chefbrucelutz@gmail.com.