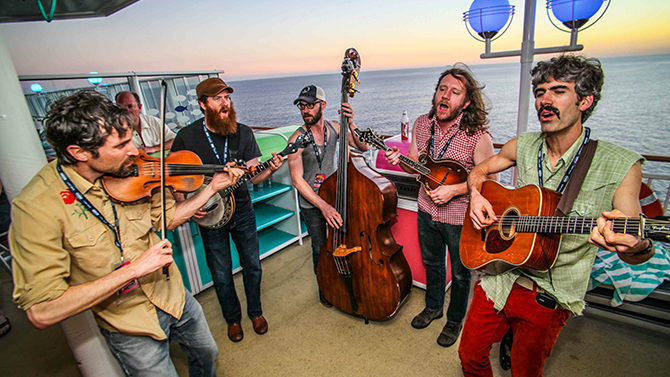 Keep the Party Going: Packway Handle Band and Foundry Entertainment will present the sixth annual Classic City American Music Festival on Saturday, July 5. Doors open at 2 p.m. and music begins at 3 p.m. Two different stages will host a variety of acts, including Bloodkin, BlueBilly Grit, Grassland String Band, Lera Lynn, Dangfly, 90 Acre Farm, Norma Rae, Isaac Bramblett Band, Clay Leverett & Friends, Betsy Franck and Brandon Reeves. Tickets for this all-day marathon affair are $15 in advance or $20 at the door and can be had at meltingpointathens.com. Oh, yeah, Packway Handle Band will also play because, you know, this is their thing and all.

Just in Time to See You All: You should probably go ahead make your plans to attend Circulatory System’s record-release show. The new album is named Mosaics Within Mosaics, and the band will celebrate its existence Friday, July 11 at the Caledonia Lounge. Also on the bill this night is Golden Brown, headed up by irrepressibly creative pop song writer Neil Golden, and rejuvenated psych-trash-shamble train ride Shade, which has been turning a record number of heads lately.

Bliss Out: Arriving just in time to make your summer a whole lot sweeter is the new EP Beautiful, from Brothers. This four-song slice of life came out June 20 and is another blessed piece of the instantly nostalgic and bittersweet guitar-pop the band began to perfect on last year’s Street Names EP. The group—composed of Ryan Gray Moore, Stephen Pfannkuche, Michael Gonzales and Noel Brown—recorded and mastered this new EP with engineer Jesse Mangum at The Glow Recording Studio. It’s also out on Mangum’s new EP-only label, MOEKE. Go dig it entirely over at brothersathens.bandcamp.com.

A Night to Remember: Memory is a tricky thing, and memory of the Athens music scene can be even trickier. To wit, do I remember an artist named D. Striker ever living here? I don’t think so. But he sure remembers it, and he’ll be playing a “homecoming show” and celebrating his 40th birthday here at The World Famous on July 19. Sharing the bill are Bo Bedingfield, The Wydelles and the aforementioned Clay Leverett & Friends. Striker reports he was nominated in the Country category in the 1999 Flagpole Athens Music Awards and moved to Nashville, TN the same year. His Bandcamp page shows that he’s had seven releases since 2006, and the style of his latest—which may well be indicative of his overall sound, but I can’t listen to seven whole albums right now—is full of storytelling and personality. He even wears a snazzy white suit on the cover of the album, which is demandingly titled Come Over Here. See if your memory jogs over at dstriker.bandcamp.com.

The Few, the Proud: Are you looking to lose your mind just a little bit more during your celebration of our nation’s independence from England? Well, punky, get yourself over to Flicker Theatre & Bar on Friday, July 4. First, you’ll enjoy a homecoming show from Mothers, which will toss you beautifully into the deep end so you can flail around to Dude Magnets, Harsh Words and Katër Mass. This is an all-inclusive, no cost event. I quote: “Bring a Federalist Party member—it’s free! Bring a Prohibition Party member—it’s free! Bring a Whig Party member—it’s still free!” It’s nice to see people reaching across party lines and inviting everyone to the hoedown. This is, after all, Athens, where the lines rarely really matter, but the party always does. Have a nice weekend.