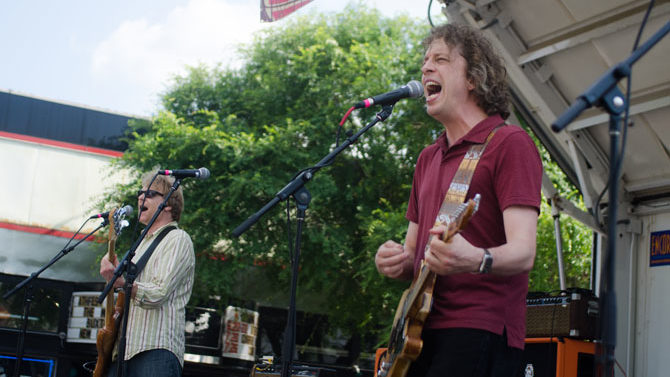 OK, folks: I know you’re worn out and in that lazy, post-AthFest haze. I am, too. But there’s always a lot going on, and you’d be as remiss in your duties as a scene member if you skipped this week’s news as I’d be if I skipped telling you about it. So, let’s get down and dirty for town and duty…

Eat Yr Heart Out: The debut release from local supergroup Hot Fudge is slated for a release celebration Friday, June 27 at the Caledonia Lounge. The album, titled #1 Tape, is a tight, seven-track record steeped in a kind of guitar-pop psychedelia that betrays its love of pure ‘70s classic rock (Grand Funk Railroad, Blue Oyster Cult) as much as its affection for synth-laden overlord anthems (Alan Parsons Project, ELO). Of course, it’s all distilled through an Athens slack-rock filter, too, so it will neither beat you up nor intimidate you out of playing your own music. In short: It’s the jam, man. Sharing the bill at the release show is the never disappointing Future Ape Tapes and Winston-Salem doom-droners Primovanhalen. Check out the first track from #1 Tape over at hotfudgeathens.bandcamp.com, and be sure to check Homedrone this week for an exclusive pre-release track.

It’s a Concept, It’s a Feeling: Canadian author Colleen Subasic, who briefly lived in Athens and worked at Hill Street Press, has published a short novel named The Forty Watt Flowers. The plot centers around a musician named Trisha and a rock band she forms with her friends. The story interpolates a good amount of actual Athens history into the tale of the fictional group, jumping from real life into fiction and back, treating the band as if it were a real thing. To wit, the author is sending the group on a virtual “tour” of now-defunct nightclubs. Although I’ve not read the book and am generally trepidatious about pop-fiction of this sort—not to mention coy authors who send me information but deliberately leave their last name off, meaning I have to spend time hunting around for it—Subasic’s affection for Athens is clear. And, you know, writing book-length stories is hard work. For someone to be inspired by our town and scene enough to dedicate the time to pounding this out is a compliment in and of itself, no matter the result. For more information, see fortywattflowers.com.

Dance (Don’t Think): One of my favorite newer labels in town, the dance-music oriented King Beluga Records, is hosting an event named Beluga Bash at the 40 Watt Club on Saturday, June 28. It’s a well-rounded showcase of the label’s affiliated artists, including Holotropic, JUJU, WesdaRuler, AstroShaman, ‘Panksi, Phiness and Mob Knarly. I heartily encourage you to check out the music of King Beluga via soundcloud.com/king-beluga and scroll around kingbeluga.com for more information.

C’mon, Get Happy: The nearly unthinkable has happened. The mighty Ceiling Fan, its creative juices seemingly revived after last year’s AthFest reunion show, has a new EP at the ready. It’s titled Survival, and is absolutely packed with the sort of wire-tight guitar heroics and slam-punch rhythms that made the band a fan favorite back in, you know, “the day.” Ceiling Fan has always specialized in songwriting that sounds familiar, but upon closer inspection reveals totally left-field things. The band makes the utterly complicated seem very simple, and really, that’s a core characteristic of all the best pop music. The group will release Survival during its show at Hi-Lo Lounge Friday, June 27, where it will play with the legendary Paul Collins Beat. Also along for the ride are local grunge-rockers Cancers and Nashville, TN band Sherbert.

Flick it On: The dates for the annual Sprockets Music Video Festival are now firmly established for July 18 and 19 at the 40 Watt. The first night is the Georgia Music Video Show. The next day will feature industry talks from video historian Stephen Pitalo and Adam Fairholm of IMVDb.com; that night will also host the Sprockets International Video Showcase. The talks require a suggested donation of $2, and the screenings are $6 each. Save yourself the trouble of toting around all those singles, though, and get a wristband for a mere 10 bucks. That’ll get ya into everything. For more information, see filmathens.net.