Update on Brian Crane: Nearly two weeks ago, we reported the death of longtime local musician Brian Crane. Crane’s brother Bill now reports that Brian “died of natural causes following a recent illness,” and says an Irish wake-style memorial is planned for Sunday, Apr. 27 at East/West Bistro. All friends are invited to join in celebration of Brian’s life from 4–7 p.m. that afternoon. For more information and to read the full obituary, see Homedrone. [Gabe Vodicka]

Read Thoroughly: Old Smokey will release its debut album, Wester Easter, Saturday, Apr. 26 at the Caledonia Lounge (see this week’s feature), and sharing the bill are the massively re-energized and vital Don Chambers, Charlie Key‘s Lavender Holyfield and the new project by Mandy Branch (Motherfucker), Secret Europeans. OK, I confess I buried the lede on this one, because it’s Secret Europeans I really want to talk about here. Only one track (“Go About Your Business”) is available, but it punched me in the emotional gut so hard I don’t know if I could take another one right now. The gentle, lilting piano-based song features Branch on Roland TR-808, piano and vocals with additional vocals by Mary Joyce (Maximum Busy Muscle). An entire album has been recorded with engineer Joel Hatstat and mixed by the esteemed J. Robbins (Jawbox, Burning Airlines), and reportedly features several other players. Lend an ear at secreteuropeans.bandcamp.com. 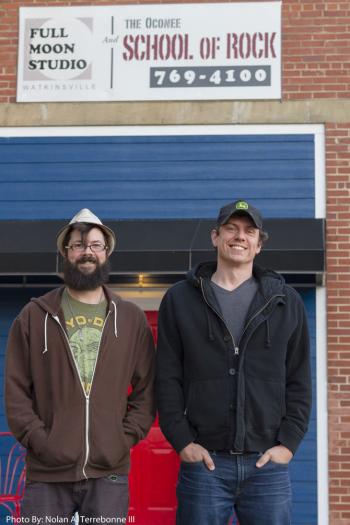 Meet The New Boss: Longtime Athens musician Josh Perkins is the new owner of Watkinsville’s well established Full Moon Studio and is heading up its Oconee School of Rock program. His partner is the now Los Angeles-based Jason Weiner, who runs digital asset management firm Crowded Head Industries. (Jay Rogers remains the studio’s lead engineer and manager.) Perkins reports that a large part of the facility’s focus is music education; music lessons for guitar, piano and voice are now available through the Oconee School of Rock. Perkins says he is “laser-focused on the family aspect of this business. I plan to be involved with the community and have my own children participating in the services we offer.” To this end, Full Moon will host its first open house Friday, May 2 as part of Watkinsville’s First Friday event. All in all, it seems like everything is off to a good start. For more information, see fullmoonstudio.org.

Hume-an Nature: Essential early ’80s Athens band Is/Ought Gap will reunite for a show at the 40 Watt Club May 23 as part of the Art Rocks Athens series of events. A visual art show, “Between Rock and an Art Place,” will open that same evening at the Lamar Dodd School Of Art. Precious little music is available from this pre-Time Toy project of Bryan Cook—who, in all honesty, deserves to be mentioned in every single report concerning the history of Athens music—but fans of the aggressive art styling of, say, Pere Ubu won’t be disappointed. The band will release an EP, titled Lucky 7 and containing, uh, seven songs, through CD Baby and all major online digital services in May. The lineup on the EP includes the aforementioned Cook along with Tom Cheek, Allan Wagner and Haynes Collins—all three of whom would go on to play in Kilkenney Cats by early 1984—but the upcoming show will feature Jason NeSmith (Casper and the Cookies) instead of Collins. File this under “Do Not Miss,” and see strikingly.com/isoughtgap for proof.

Button On: Since we’re already speaking about Art Rocks Athens, let’s go ahead and mention that the organization’s first exhibit is opening May 1 at the UGA Special Collections Libraries. Said exhibit is a partnership between ARA and the university’s Walter J. Brown Media Archives and Peabody Awards Collection. The opening runs from 6–10 p.m. The exhibit will be up until Dec. 31 and is described as “a carefully curated assortment of artifacts, physical objects that exemplify the do-it-yourself spirit of the early Athens music scene.” The opening will feature a talk from Michael Lachowski on how Pylon was an art project, an early video of The B-52’s made by Spencer Thornton and a cocktail dance party featuring various models wearing wigs and costumes owned by Kate Pierson and Cindy Wilson of The B-52’s. Follow along at artrocksathens.com.

The mighty Woggles return to Athens for a night at Green Room Friday, Apr. 25. The band, now over 25 years running, pretty much defined and galvanized the garage-rock scene that took large segments of Athens by the throat in the mid-1990s. Now with a discography numbering over 20 releases, not including numerous compilations, the band, led by the fearless and eternally entertaining Manfred Jones, continues to wow audiences around the world. The group’s most recent album, The Big Beat, was released in 2013. Local rock enthusiast and overall social gadfly Nate Mitchell will lead his group Nate and the Nightmares through the trenches to open the show. The VG Minus—featuring original Woggles drummer Kurt Wood—will also play, so get there early. See this week’s feature for more.

Moon, Stars, Sun, Etc.: When word came down that Asheville, NC band The Shine Brothers would be in Athens Wednesday, Apr. 23 at Green Room, my memory went blank. My informant advised me that this group contained one Oakley Munson, who had spent time in Athens in the late aughts with his garage outfit Puddin’ Tang. I recalled the name, but totally blanked on the music. After some crowd-sourcing, I dug back through some tunes and still nothing rang a bell. But then I saw Oakley’s photo and instantly remembered him. Swell dude! At any rate, The Shine Brothers are more organ-driven than Puddin’ Tang, with more of a pre-psych mid-’60s vibe. The band will play with Free Associates and Timmy & the Tumblers, the latter of which is currently rocking harder than I’ve ever seen them. Carry on via facebook.com/TheShineBrothers.